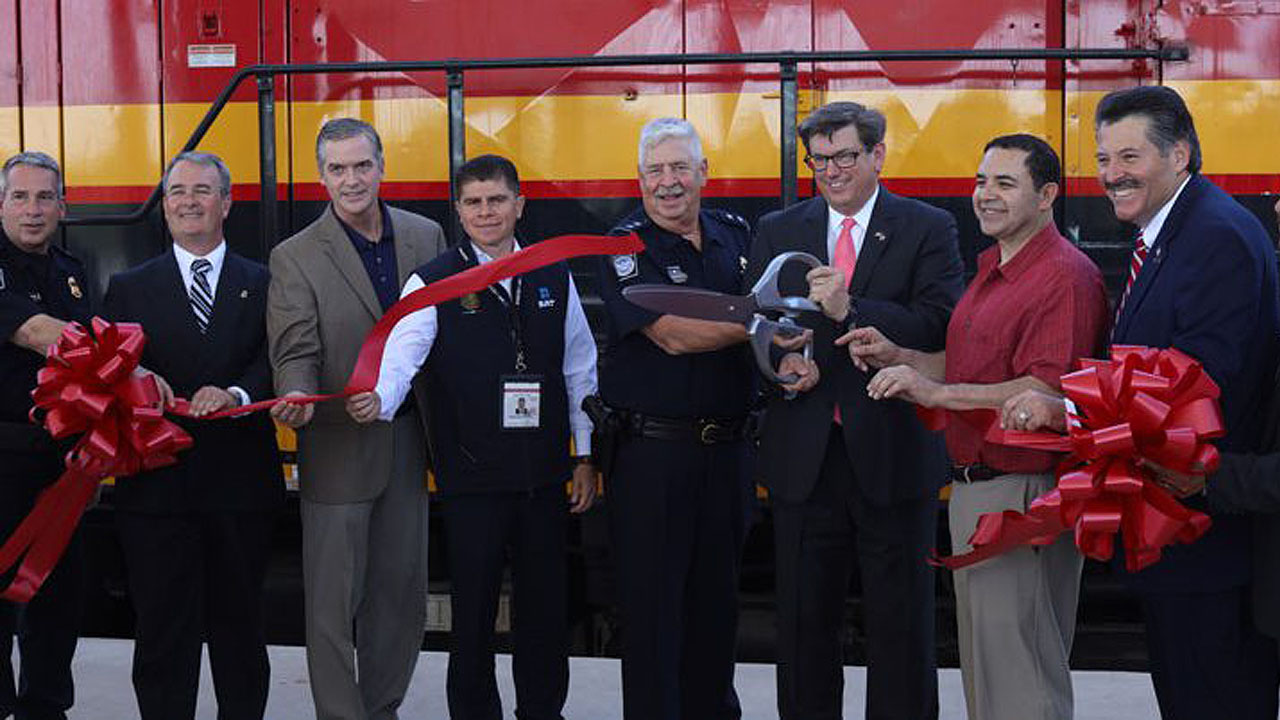 Kansas City Southern and U.S. Customs and Border Protection celebrated the completion of the Secondary Examination Station at the KCS Laredo rail yard Aug. 10 with a ribbon-cutting ceremony.

The Secondary Examination Station is part of the “Secure Corridor” crossborder rail operations strategy, which KCS said aims to bolster security and reduce blocked crossing time by removing current operating obstacles to the constant movement of trains across the border between the United States and Mexico.

The railroad said the concept has been a priority for Cuellar and other local officials for some time, and is consistent with the Class I’s partnership with CBP, the Federal Railroad Administration, the city of Laredo and Cuellar in an effort to improve the safety and efficiency of trains moving through Laredo.

“The Secure Corridor rail operations strategy, including the Secondary Examination Station, is a model for how communities, governmental authorities and private enterprises can work together to create outcomes that benefit everyone,” Ottensmeyer said. “This new facility is one important element of a broader strategy intended to improve public safety, facilitate growth with our key trading partners and customers and foster the opportunity for future job growth in the community.”

Working for the Laredo Field Office, CBP Director of Field Operations David P. Higgersonsaid said the investment KCS has made by building the new facility provides a permanent, secure structure in which officers and agriculture specialists can conduct inspections.

“It’s a win-win as it helps us fulfill our trade facilitation and enforcement mission and helps facilitate future economic growth,” Higgerson said.

The Laredo/Nuevo Laredo rail crossing is the busiest on the U.S.-Mexico border, processing on average 23 trains in both directions per 24-hour period, and carrying a wide variety of products such as automobiles and parts, steel, grain and petroleum products.

“Laredo is home to the largest rail corridor on the U.S.-Mexico border, processing more than 20 trains every day,” Cuellar said. “Streets are often blocked by the high volume of trains across the southern border, which impedes the ability of first responders to get to areas where they are needed in the fastest time possible. This newly-constructed building and the broader Secure Corridor strategy will decrease crossing times, reduce waiting times when trains block our city streets, increase security, and streamline the flow of trains and trade. It will also help ensure that CBP employees are able to conduct their secondary rail examinations in a safe and secure work environment. Making these necessary improvements to our railways will help expedite trade processes and create more jobs, which will in turn greatly benefit the local and national economy.”

Kansas City Southern added that it expects demand for rail shipments across the gateway in both directions to continue to increase in the future, particularly with growth in U.S. agricultural and future energy exports to Mexico.