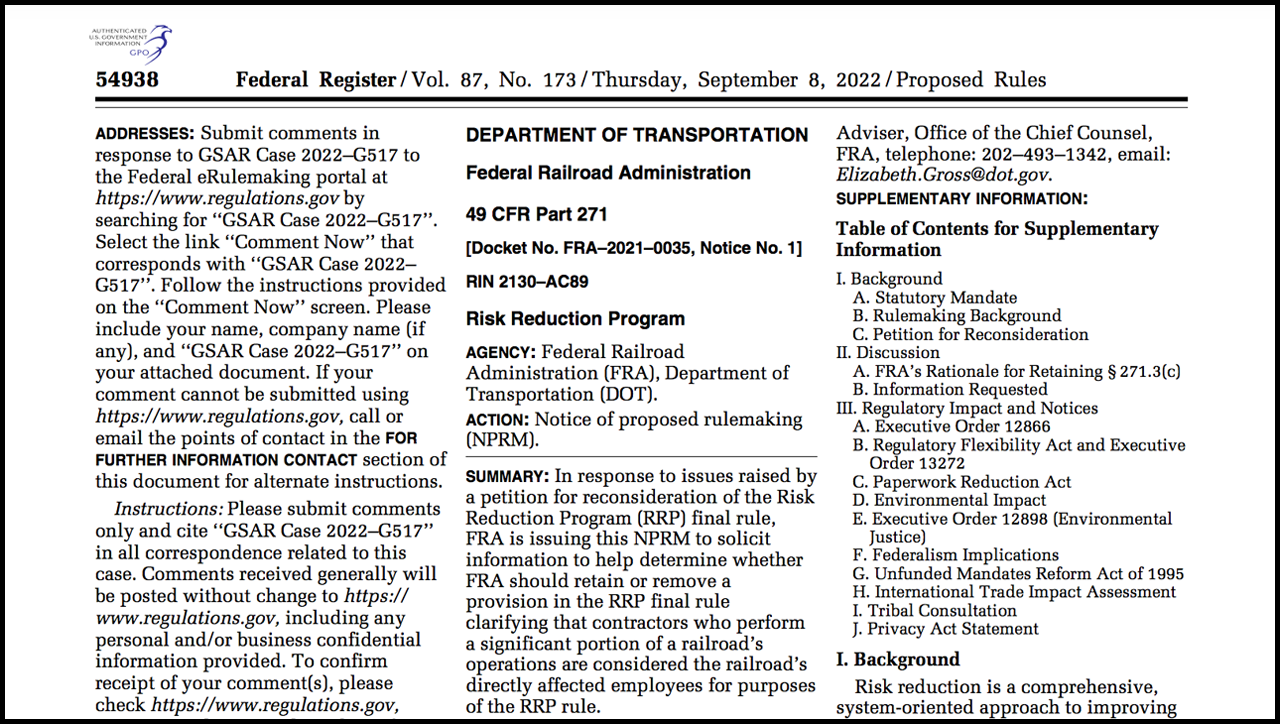 The Federal Railroad Administration (FRA) on Sept. 8 issued a Notice of Proposed Rulemaking to solicit comments on whether it should retain or remove a provision of the Risk Reduction Program (RRP) final rule, which took effect in 2020.

When the Rail Safety Improvement Act (RSIA) was enacted in 2008, Section 103 “directed the Secretary of Transportation (Secretary) to issue a regulation requiring Class I railroads, railroad carriers that provide intercity rail passenger or commuter rail passenger transportation (passenger railroads), and railroads with inadequate safety performance (ISP railroads) to develop, submit to the Secretary for review and approval, and implement a railroad safety risk reduction program,” FRA wrote in the Federal Register on Sept. 8. “Under sec. 20156(g), each railroad carrier required to submit a railroad safety risk reduction program must ‘consult with, employ good faith, and use its best efforts to reach agreement with, all of its directly affected employees, including any nonprofit employee labor organization representing a class or craft of directly affected employees of the railroad carrier, on the contents of the safety risk reduction program.’ The Secretary delegated the authority to conduct this rulemaking and implement the rule to the Federal Railroad Administrator.”

FRA published an RRP Notice of Proposed Rulemaking in 2015 and an RRP final rule on Feb. 18, 2020. “Railroads’ ongoing evaluation of their asset base and employee performance associated with operations and maintenance, under FRA regulations, can now follow a more uniform path of standardization toward further reducing risks and enhancing safety,” FRA said when the final rule was released.

According to FRA’s Sept. 8, 2022 Federal Register report, the RRP final rule “does not contain a definition for ‘directly affected employee.’ However, the rule clarifies in § 271.3(c) that ‘[i]f a railroad contracts out significant portions of its operations, the contractor and the contractor’s employees performing the railroad’s operations shall be considered directly affected employees for purposes of this part.’”

FRA said it received on April 10, 2020 a petition for reconsideration of the RRP final rule from the Association of American Railroads (AAR). AAR asked FRA to reconsider the inclusion of § 271.3(c), explaining “that while the inclusion of contractor employees may be appropriate in the SSP rule for passenger railroads that contract out their entire operations, the same is not true for Class I freight railroads,” according to FRA. “As such, AAR argued that including § 271.3(c), without corresponding safety justifications or notice and opportunity to comment, was arbitrary and unreasonable. AAR further argued that FRA did not adequately define a ‘significant portion’ of a railroad’s operation or account for costs associated with § 271.3(c).”

FRA is now seeking feedback by Nov. 7, 2022 to help it determine whether § 271.3(c) should be retained or removed from the RRP final rule.