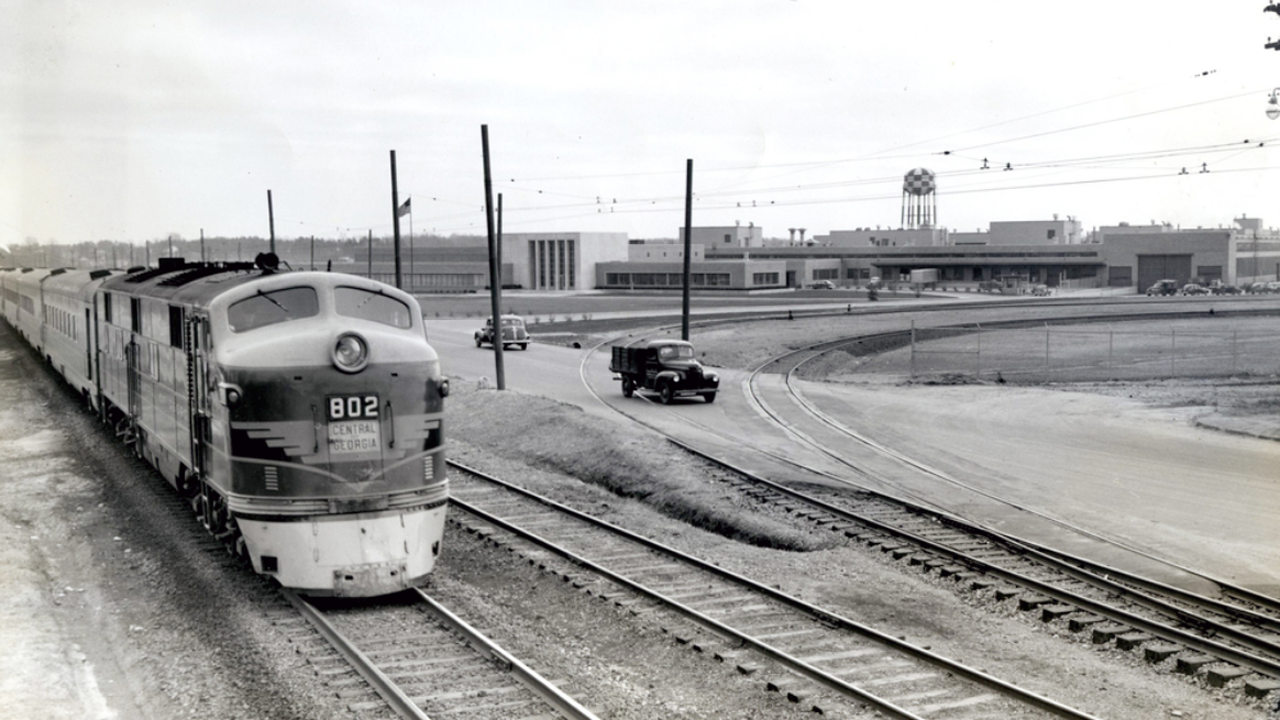 Central of Georgia’s Nancy Hanks II at Ford’s Hapeville plant in a publicity shot from 1948. The Nancy Hanks II operated between Atlanta and Savannah, Ga., with a stop in Macon and other towns along the way. The all-coach, reserved seat train included coaches and a grill-lounge car. (Caption Courtesy of the Atlanta History Center.)

Norfolk Southern (NS) is donating its collection of archival materials from Southern Railway to the Atlanta History Center in Georgia.

The archives document the history of Southern Railway, which in 1982 merged with Norfolk & Western to create NS. Many of Southern Railway’s 200-plus predecessors, dating from 1827, have direct ties to Atlanta, which becomes home to NS headquarters later this year.

The collection dates from the 1840s and includes hundreds of thousands of pages of correspondence, minute books, reports, and construction plans, as well as more than 20,000 photographs. Among the historic materials: menus from President Franklin D. Roosevelt’s train trips; telegrams announcing the sinking of the Titanic; more than 30 years of editions of the Southern Railway’s Ties Magazine; and advertisements, contracts, photographs, and construction plans for rail stations and yards.

NS is also providing a $500,000 grant that will allow the Atlanta History Center to digitize, catalog and preserve the collection. The companies have earmarked $50,000 to hire archival interns from underrepresented communities over the next five years. NS said it expects the donation process to be completed by early 2022.

“The history of Southern Railway is inseparable from the history of this region,” NS Chairman, President and CEO Jim Squires said. “This treasure trove of material belongs in Atlanta, and there’s no better home than Atlanta History Center.

“Moving our headquarters to Atlanta starts a new chapter in our company’s story. With access to the city’s world-class technology and business talent, we will once again make Atlanta a center for railroad innovation and industry leadership. This contribution demonstrates our intention to be an engaged member of our community.”

“This collection is crucial to uncovering the many stories behind the city’s transformation,” Atlanta History Center President and CEO Sheffield Hale said. “We’re excited to have the opportunity to preserve this history and make it publicly available for students and teachers, researchers, and those who are simply interested in Atlanta.”