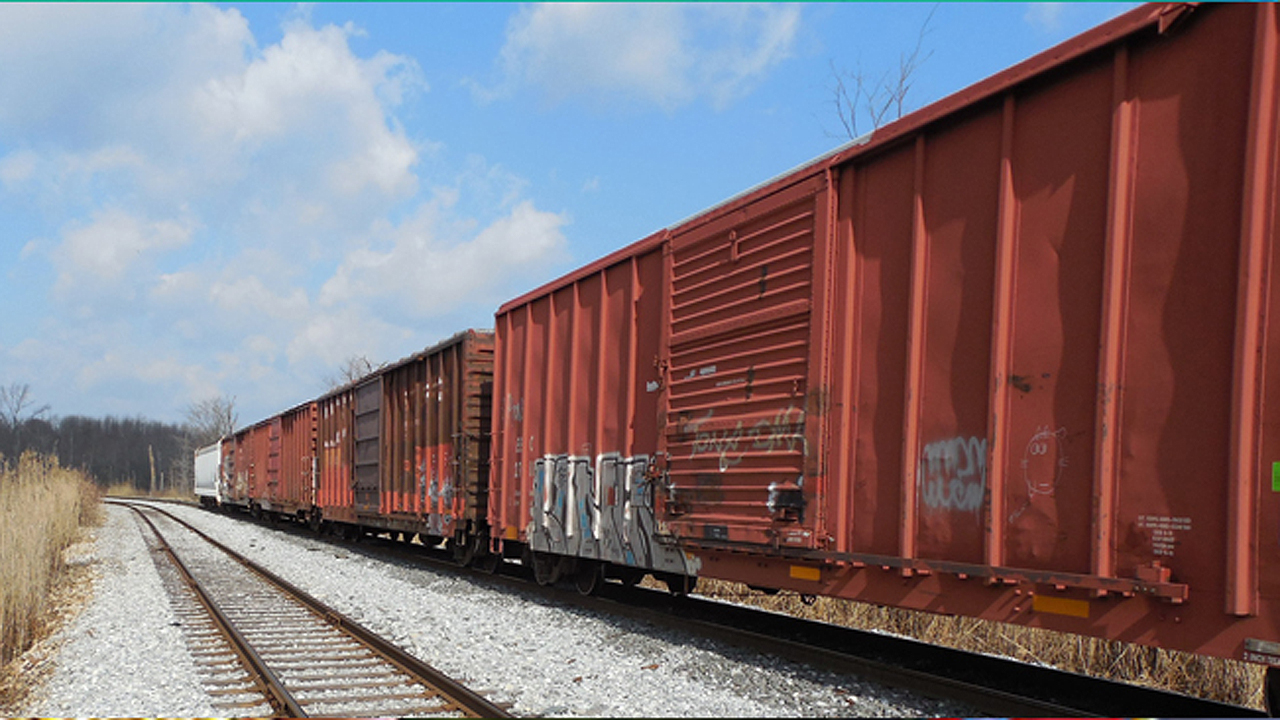 Freight has been hurting in the U.S., but south of the border is a different story. Photo courtesy SMS Rail Lines

Here is a different perspective regarding the decline in U.S. rail carloads, and how long ago it may have started. Lee A. Clair, Managing Partner at Transportation and Logistics Advisors (T&LA, Highland Park, Ill.) originally authored these observations.

Clair’s assessment of rail freight is interesting, since his point of view is based on a cross-functional education with elements of logistics, law, business administration and transportation. The ideas he has presented resurfaced in a library stacks research project I have conducted over the past two years. It’s offered in parts here as 2019 closes with U.S. railroads trying to rebalance their strategy for growth and market share heading into the 2020-2030 decade. This is being done with a backdrop of declining demand for freight rail.

Original remarks from Lee Clair are available on his presentation at a November 2017 Stifel Capital Markets conference:

Let’s start with positive information. Yes, there clearly was a freight rail renaissance period prior to 2007 when there was traffic unit growth. When did that occur? Federal Reserve Bank of St. Louis (FRED) charts show that growth period. U.S. government transport records show that customer business tendered to railroads as carload units. Note: Intermodal is excluded from both Figure 1 and Figure 2.

There was carload unit growth going into 2006. Then the pattern began to fall—into the Great Recession of 2007-2008. Since then, there have been only two brief growth periods—2009-2012 and 2014-2016. Figure 2 refocuses our eyes on the shorter-term carload pattern between 2014 into early 2019. The biggest single decline in carloads took place in the coal sector. (Note: GDP recession periods are shown as gray shade on the FRED graph.)

Conversely, rail intermodal volume has grown since 2006. Intermodal has been a success story. But that growth stalled in 2019. The reasons are complicated. The message is that entering 2020, the railroad view of intermodal growth is not clear. No one seems to be ordering more intermodal railcars. There are multiple signs of unused intermodal capacity in 2019. One sign is lower rail intermodal spot prices (Figure 3) in selected cross-country corridors than the competition’s corridor spot intermodal prices.

Sticking with carloads, what is that segment’s message? How much market position does carload freight have and how much relevance for growth? Answers are tough to come by.

Railroad corporate profits have improved despite the decline in coal carloads and the overall flattening patterns of other types of carloads. Railroad company executives “expect” volume to return in the future as they ratchet their internal costs down further and increase their corporate net cash flow. However, a due diligence review finds very few instances historically whereby a significant lowering of railroad company internal costs automatically translated into a larger customer traffic volume growth.

There is, however, evidence of customers using more railroad service when the railroads shared part of their internal rail company savings with customers by lowering rates. Is that happening in 2019? Are U.S. railroads splitting the cost savings from their internal cost restructuring—sometimes under the guise of so-called Precision Scheduled Railroading changes?

A survey of logistics literature suggests that rail freight carload rate cutting is not being reported. Might rail managers adopt selective rate cutting to increase overall reported future net cash flow and market share volume into the next decade? There are not yet many signals of a pricing strategy.

How serious has carload traffic erosion and slowing of growth been? One way to answer is to use a series of classic “what-ifs” to consider the relative market size position of rail carload traffic that “might have been.” This is where Lee Clair’s insight comes in.

Clair observes that the 2015 U.S. economy was about 75% larger than it had been in the base year of 2000. If we mentally adjust that downward for inflation, we might moderate this to a calculated 30% to 40% growth in the economy. On a carload basis, railroads didn’t keep pace.

Where have railroads been succeeding? It is in the financial area. U.S. railroad management success between about 2004 and 2014 was in pricing leverage. In that recent decade, nominal rail prices increased significantly. Analysis by T&LA shows that between 2004 and 2014, rail prices stated in average price per ton-mile increased by about 5%. That was despite the Great Recession period shown in Figure 4.

That is in marked contrast to the public relations aspects surrounding the lowering of railroad rates after the passage of regulatory freedoms under the 1980 Staggers Rail Act. During the immediate post-Staggers Act period, rail freight prices declined by about 1% per year. But this rate-reduction story line—a very good one—has apparently run its nearly four-decade-long course. A continued pattern of lower rates is not the signal shippers are seeing out toward 2030.

Figure 5 shows the railroads’ overall financial success story in a graph. U.S. railroads’ reported net income saw a worldwide superior performance in earnings between 2004 and 2014. Higher reported quarterly earnings continued into the third quarter of 2019.  Overall freight profitability retains its luster—even as volume drops. You don’t see that elsewhere in the global railway sector (Canada being an exception), or in most competing freight modes.

The core message is that in the 25-year period between 1990 and 2015, overall carloads (excluding intermodal) decreased at a rate of –0.2% compound annual growth rate (CAGR). Yes, that includes the coal decline. Technically, this suggests that plenty of network capacity exist out there—if the railroads want to gain traffic volume. The contrasting statistics are that the economy to be served grew in the same period. Industrial production grew at a 1.6% CAGR for 25 years. Figure 6 illustrates how U.S. rail carloads have under-performed U.S. industrial production in the past decade.

While the U.S. overall growth rate may be much slower than that following the end of World War II, it is nevertheless growing. Figure 7 is a FreightWaves SONAR graph showing the current carload rail freight volume as we approached December 2019. Important to note is that volumes now are below that of both 2018 and 2017 as the year ends. The pace remains overall negative for rail carloads.

Without some type of trade resolution between China and the United States, it is difficult to assert a forecast of strong carload growth during 2020. With a trade deal of substance, there could be a surge in grain, fertilizer and petrochemical carload commodities into 2020 and 2021.

In an Oct. 23 Railway Age report on the Association of American Railroads weekly rail freight traffic, I was quoted as saying that U.S. Class I’s are now in a freight recession. The AAR disagrees. “Year-to-date U.S. rail volumes have been trending lower in 2019, but calling it an indicator of a freight recession would be incorrect,” AAR Senior Vice President Policy and Economics John Gray said on Dec. 4 in a media briefing. “You’ve got too many positive things going on in this economy.” Gray said while trade uncertainty and the tariff situation between the U.S. and China has put pressure on the U.S. industrial economy, the consumer economy is still doing well in comparison.

Similar patterns between rail and the U.S. manufacturing sector occurred in 2015 and 2016, but those patterns failed to serve as a precursor to a recession, he said. That is true. As well, trade issues and international events are influencing the U.S. industrial economy, rather than pressures from the domestic economy, Gray said. He added that rail has a smaller share of domestic freight moves, and so changes in rail volumes might not be as accurate an indicator of a recession than years ago.

However, look at the 2015 – 2019 change in the curve slope over that recent period vs. before that. Is AAR playing the 2020 non-freight-volume recession outlook a bit too optimistic?

Then there’s the AAR data showing that the number of railcars in storage increased another 15,000 to now 23.6% of the fleet. Nearly 120,000 railcars have gone into storage since utilization peaked in the fall of 2018. This is an overhang of more than 7% of the total railcar fleet during two years of mid-cycle North American railcar production, while rail volumes remain under considerable pressure as 2019 comes to a close 2019.

According to analysis by Susquehanna International Group Senior Equity Research Analyst – Industrials Bascome Majors, during November 2019, total railcars in storage rose (and utilization declined) for the seventh straight month, with 13 of the past 14 months headed in a cyclically negative direction for rail equipment (Figure 8).

Macro View: Railcars went back into storage sequentially during November, continuing the broader trend of rising storage/falling utilization that started in October 2018 and was only briefly interrupted for a single month, in April 2019. As of Dec. 1, 23.6% of the 1.68 million railcars in the North American fleet were in storage, up 90bps from the prior month and ~7bps above October 2018’s low of 16.7%.

Doom and gloom, however, need not be the takeaway message. Despite all of the above, the prospects for rail freight are not inevitably bleak. Once railroad managers admit to the market risks, adjustments can be made. An aggressive return to volume growth across the railroads’ much-higher-productivity routes could be targeted.

An increase in petrochemical shipments is very promising for rail volume growth, and is still a highly valued service by customers who own or lease private tank car fleets. In some lanes, liquefied natural gas (LNG) could replace crude oil by rail volume that might be lost in the coming years as pipelines come on line.

Movement of high-and-wide industrial products on selected corridors has significant upside. These products include wind turbines, generators and transformers. In addition, both planned as well as emergency logistics response efforts could move by rail.

It is always recommended that readers seek alternative counsel and insight.

For even more revealing rail freight financial insight, material published by Anthony B. Hatch (Senior Transportation Analyst at ABH Consulting) is a recommended source. Hatch was named the 2019 North American Rail Shippers Association (NARS) “Person of the Year.” Hatch has been a senior transportation analyst on Wall Street for more than 30 years at major financial institutions such as Solomon Brothers, Argus, PaineWebber, and Natwest Markets.