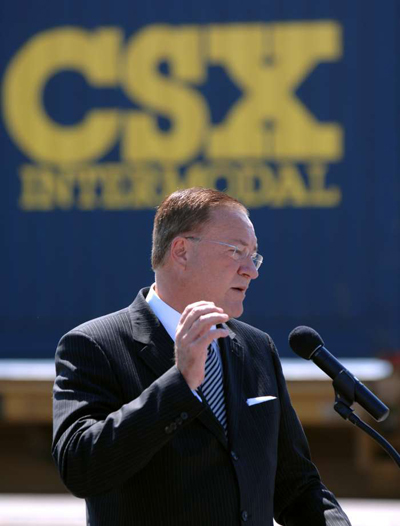 Gooden “has helped lead CSX’s growth and value pricing efforts, serving as Executive Vice President and Chief Sales and Marketing Officer since 2004,” the company said. “His career with CSX and its predecessor companies has provided him with more than 40 years of experience in Operations and Sales and Marketing.”

Eliasson “has helped develop and lead strategic initiatives, particularly in efficiency and capital allocation, since his appointment as Executive Vice President and CFO in 2012,” CSX said. He previously served in key Sales and Marketing and Finance leadership roles, including as vice president of the chemicals and fertilizer business, vice president of emerging markets, vice president of commercial finance, and vice president of financial planning and analysis. He joined the company in 1995.

Sanborn “has helped lead the company’s operating performance and Service Excellence initiatives in the role she took on earlier this year as Executive Vice President-Operations and in leadership positions of increasing responsibility in Operations, including as vice president and chief transportation officer and vice president-northern region,” CSX said. She joined CSX in 1987.

Lonegro “has helped shape and lead efficiency and capital strategies in positions of increasing responsibility, most recently as vice president-service design and before that president of CSX Technology, vice president-mechanical, vice president-internal audit and associate general counsel,” CSX said. He joined the company in 1999.

“I look forward to leading this dynamic team, and have every confidence in our ability to deliver a compelling future for CSX,” said Ward. “I plan to leverage this team’s leadership and tremendous skills in safety, customer service and efficiency as CSX executes its strategies to achieve ever-better levels of financial performance. We sincerely congratulate Oscar on his appointment to United and the opportunity to lead another outstanding transportation company. We all thank him for 12 years of dedicated and successful service to CSX.”

Munoz, 56, told United employees in a Sept. 8 letter, “I recognize that this news is unexpected, and I want you to hear it directly from me, as United’s new CEO.”

Munoz, who graduated from the University of Southern California and earned an MBA from Pepperdine University, was named President of CSX in February 2015. He served as CSX’s CFO for almost nine years before becoming COO in 2012. Prior to CSX, Munoz was CFO at AT&T Inc.’s consumer services unit and held executive jobs at Coca-Cola Co. and PepsiCo Inc.

Smisek and two of his lieutenants were ousted from United while federal investigators probe the airline’s ties to David Samson, former chairman of the Port Authority of New York & New Jersey, which owns and operates Newark Liberty International Airport, United’s principal U.S. hub.

“Smisek’s abrupt exit added a dramatic new element to the inquiry by U.S. prosecutors into whether Samson got the carrier to restart a money-losing route to his weekend home in South Carolina in exchange for political favors,” Bloomberg News reported. “United dropped that service, once known as ‘the chairman’s flight,’ days after Samson left the agency in 2014. United agreed to add the flight to Columbia, S.C., from the airline’s Newark hub after Samson twice threatened to block Port Authority consideration of one or more of the airline’s favored projects, according to details gleaned from Port Authority records, people involved in talks between United and the authority, and others close to the investigation.”

Samson’s apparent request for the New Jersey-to-South Carolina flight, at a dinner with Smisek at a Manhattan Italian restaurant, was the subject of an April story by Bloomberg News. Also attending that dinner, Bloomberg reported at the time, were the two other United officials who resigned: Nene Foxhall, executive vice president of communications and government affairs, and Mark R. Anderson, senior vice president of communications and government affairs. The Port Authority has been under scrutiny since the so-called “Bridgegate” scandal in 2013, when former staff members of New Jersey Republican Governor Chris Christie closed traffic lanes at the George Washington Bridge (which is one of several bridges, tunnels and airports the Port Authority owns and operates) as political retaliation against the Democratic mayor of Fort Lee, N.J., Mark Sokolich, for not endorsing Christie in the 2013 gubernatorial election.

Smisek floats away from United on a platinum parachute. He is eligible for separation payments worth at least $28.6 million, according to United regulatory filings. That includes a $4.88 million cash severance and restricted shares worth $3.5 million that will vest early, plus performance-based awards worth $19.5 million at the company’s Dec. 31 fiscal year-end. He’s eligible to receive a pro-rated portion of his annual incentive award, which paid out $2.34 million to him last year. Smisek also receives flight benefits, tax reimbursements on those benefits, and parking privileges for the remainder of his life, in addition to the title to his company vehicle, according to United.