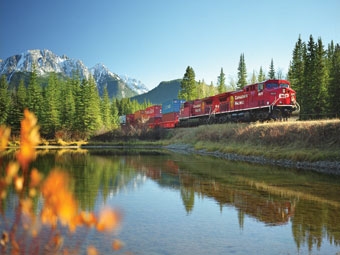 Canadian Pacific Railway (CP) on Oct. 20, 2015 posted its highest-ever revenue for the third quarter, with a 16% growth in adjusted earnings per share to $2.69 and the lowest operating ratio for the period in the company’s history.

“I am proud of the CP team’s execution this quarter amid stubborn economic softness and the lowest commodity prices in more than a decade,” said E. Hunter Harrison, CP’s CEO. “It’s clear that despite the ongoing tough economic environment, our continued focus on service, cost control and incremental investment in the franchise will serve customers and shareholders well in the long run.”

Separately, CP today announced that it has ratified a transformational multi-year collective agreement with its 450 U.S. engineers represented by the Brotherhood of Locomotive Engineers and Trainmen (BLET).

The new hourly-rate agreement brings an end to a mileage-based wage system from the steam engine era and provides CP with increased flexibility and transparency, the employee with a cycle with two consecutive days off and the best wages in the industry, the railroad said.

“This negotiated agreement is a major step forward for both parties and represents the biggest win-win that a railway, its employees and operating unions could have,” said Keith Creel, CP’s President and COO. “The benefits it will provide to all parties, including—at the center of it all —our customers, are immediate and will build month by month and year by year.”

The agreement—which also gives BLET members the ability to participate in the employee share purchase plan—spans three years with an option for either side to revert to the former agreement if written notice is given prior to the beginning of the third year. If neither party reverts, the agreement is extended for two more years.

“Our people are the key to CP’s success and they deserve to share in the success of the company,” Creel said.