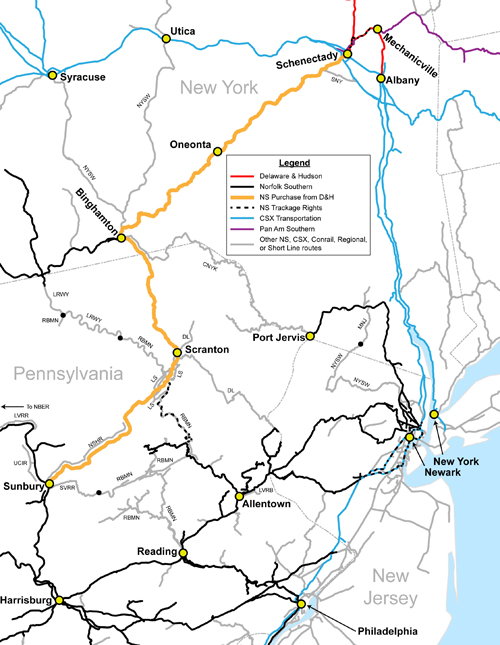 The $214.5 million sale (subject to adjustments) of the D&H South line was first announced Nov. 14, 2014 and approved by the U.S. Surface Transportation Board on May 15, 2015. The D&H South sale includes all branch lines and industrial spurs that connect to the Sunbury-Schenectady main line, plus some equipment, vehicles and parts. NS formally began rail operations on the corridor on Saturday, Sept. 19. Approximately 45,000 CP carloads and shipping containers moved across the line annually, including consumer goods, salt, grain and forest products.

The acquired lines connect with the NS network at Sunbury, Pa., and Binghamton, N.Y., providing NS single-line routes from Chicago and the southeastern U.S. to Albany, N.Y., and NS intermodal terminals at Scranton, Pa., and Mechanicville, N.Y. NS also gained an enhanced connection to its joint-venture subsidiary Pan Am Southern, which serves New England markets. Additionally, NS has acquired the D&H car shop in Binghamton, along with other facilities. NS has hired about 150 former D&H employees who have experience working this corridor. NS m/w crews are scheduled to perform routine maintenance, and NS plans in 2016 to add new ties, resurface 40 miles of track and install 14 miles of new curved rail.

As part of the transaction, NS will retain and modify its overhead trackage rights on the line between Schenectady, Crescent and Mechanicville, N.Y., as well as Saratoga Springs, N.Y.

“We are pleased to have completed this transaction in partnership with Norfolk Southern,” said CP President and Chief Operating Officer Keith Creel. “The sale allows CP to create value for our shareholders while better aligning the route with the railroad that already moves the majority of traffic over it.”

“The D&H South Line integrates perfectly into our 22-state rail system, and it allows NS to connect businesses along this important economic corridor with a rail transportation system that’s a top performer in safety and efficiency,” said NS President and CEO James A. Squires. “Our acquisition will make NS a more competitive transportation option between Pennsylvania, New York, and New England.”

“This acquisition is a sign of our confidence in the economic potential of northeastern Pennsylvania, New York’s Southern Tier and New England,” said NS Vice President Strategic Planning John Friedmann. “Our commitment to enhancing the D&H South Line will preserve good-paying railroad jobs and generates excitement at NS about future economic growth in the region.”

In the past, CP has run its Holiday Train over the D&H South but due to the completion of this transaction, will no longer visit communities in this corridor. “However, this year CP will make one final donation to the food shelves it has previously supported in the area,” CP said.