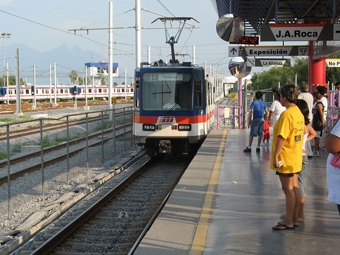 Siemens has been awarded a contract worth approximately €25 million (US$32 million) by the state government of Nuevo León (Secretaría de Obras Públicas del Estado de Nuevo León) to equip Metro Line 3 in Monterrey, Mexico with telecommunications, signaling, and operations control systems. This roughly four-mile-long new line will connect residential areas and the metropolitan hospital in the northeast of the city with the city center. Metrorrey Line 3 is scheduled to be commissioned in autumn 2015.

To meet the rising demand for public transportation in Mexico, the current federal government announced that it would set up mass transit systems in at least 40 of the country’s 52 major cities by the end of its administration period in 2018. As part of this program, Siemens is to equip the eight stations on Metrorrey Line 3 with the CTS/M (Magnetic Train Stop) ATP (automatic train protection) system. ATS (automatic train supervision) will be realized using the Siemens Vicos operations control system, while the Siemens RailCom Manager system will be installed for telecommunications. Two Sicas type electronic interlockings are being installed for train control purposes. The signaling equipment will be controlled and monitored via the operations control center in Cuauhtemoc. The new metro link is designed to handle an expected ridership of some 280,000 passengers daily, thereby significantly easing the traffic situation in the city.

Monterrey is the capital of the Mexican state of Nuevo León and is located around 550 miles north of Mexico City. The Metrorrey Lines 1 and 2 carry approximately 170 million passengers annually. Siemens participated in the construction of both lines with the supply of various systems. Commissioned in the 1990s, Metrorrey Line 1 is about 12 miles long and links the eastern and western parts of the city . With around four miles of track, Metrorrey Line 2 originally opened for revenue service in 1994. A five-mile extension to the north was added in 2005 under the terms of a turnkey project handled by a Siemens-led consortium.