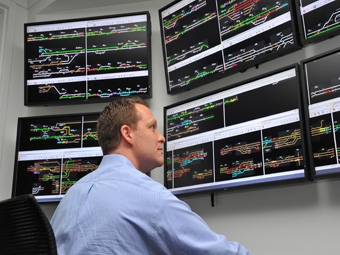 For NS, the 24-hour chess game of operating a railroad as efficiently and safely as possible has been notably improved. What was once a collection of outdated dispatch systems inherited from the railroad’s numerous predecessors (Norfolk & Western, Southern, Virginian, Wabash, Nickel Plate Road, etc., and Conrail and its many predecessors) are now tied into a single, integrated system: the Unified Train Control System (UTCS), jointly developed by NS and GE Transportation Systems.

NS describes UTCS, a $70 million investment, as “next generation” dispatching. The base system, called Precision Dispatch, was completed in October 2013.

UTCS automates many tasks that dispatchers once did manually. For example, it automatically helps them manage slow orders and provides them with prompts while they remain in effect. To improve safety, UTCS generates on-screen pop-up windows to alert dispatchers to issues that need attention, such as information on track authorities, clearing train movements, and turnout alignments. Weather reports are continuously updated, and advisories of high winds, flooding, and other potentially disruptive conditions appear automatically on dispatcher screens. Track maintenance crews can use UTCS’s Track View function to identify windows of work time where train traffic will be light. As a result, m/w crews can be more efficient and productive, and dispatchers can spend less time trying to coordinate track work windows with train traffic.

One of the keys to UTCS is total redundancy—redundant data on redundant servers. “Any division can be dispatched from any location—even outside a dispatch center from a laptop or tablet computer, provided there is Internet connectivity,” notes Turnipseed.

Managers can call up a train remotely and find its location. For disaster recovery (a natural disaster or other emergency situation), NS has a command center, a backup facility north of Atlanta that can handle the entire network. “We have the capability to relocate everything there, if needed, within 24 hours,” he says. “And each of our divisional dispatch centers has a disaster recovery desk.” Recovery time from a system failure, be it hardware or software, is incredibly fast. Turnipseed recalls an incident in which the Piedmont Division dispatch system, which handles VRE passenger trains serving Washington D.C., experienced a LAN failure. “Within two minutes, we had control transferred to the Atlanta Division. The trains kept moving; the passengers never knew there was a problem,” he says.

This past February, Movement Planner, which Turnipseed calls “the brains behind the system,” was rolled out on the Pittsburgh Division, the final one to receive it.

Movement Planner, currently used only in CTC territory, is tied in to UTCS’s Auto Router function, an execution tool that transmits train movement plans to the field, setting routes by lining turnouts and displaying the corresponding wayside signals. It looks at the railroad from the 50,000-foot level, crunching massive amounts of data on train count, freight volume, m/w hours, horsepower per tonnage ratios, topology constraints, and many other factors when generating train movement plans. Those plans are in lock-step with NS’s business rules involving such factors as priority trains and on-time performance.

For example, intermodal trains, which must be precisely timed to the work windows of a rail-to-truck transfer terminal, have priority over general merchandise trains. There are financial penalties to pay if intermodal performance targets are not met. Movement Planner “knows” what needs to happen, and it can plan up to 12 hours out, “something humans really can’t do,” says Turnipseed.

Movement Planner has proved especially useful in helping NS keep track of three key performance indicators: schedule adherence, crew expirations (“going dead on the law,” where a train must be re-crewed on line-of-road, at substantial cost and time), and network velocity. While dispatchers have the option of overriding what Movement Planner is telling them to do, it’s generally to their benefit to comply. “We’ve found that, as Movement Planner compliance increases, so do schedule adherence and velocity,” notes Turnipseed. “Crew expirations decrease.”

Movement Planner measures and keeps track of dispatcher overrides. For some of the more-experienced dispatchers, the moves it generates may seem counter-intuitive. Though for the most part it has been widely embraced, “our younger generation of dispatchers is more in tune with it,” says Turnipseed. “That’s because they have grown up having to rely on computers and software-driven technology.”

Once Positive Train Control is fully deployed, Movement Planner will be able to provide full operational integration, “origin to line-of-road to destination.” Future plans call for it to be deployed in non-CTC territory, where trains are operated under TWC (Track Warrant Control). Tied in with PTC and GPS, for precise train location, it will generate what Turnipseed calls “track authority suggestions” for dispatchers. As well, it will be integrated with LEADER (New York Air Brake’s Locomotive Engineer Assist Display and Event Recorder), with which every NS road locomotive will eventually be equipped.

“Before UTCS, each division really was its own little railroad,” says Somerset, Ky.-based Manager Dispatch Training and Data Chad Hill. “Once they operated the trains across their division, they were basically done with them. Now we’re one big network.”