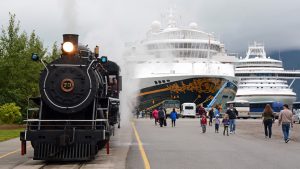 Ever since the first rail was laid in 1898 to lift Gold Rush Stampeders over the jagged mountains of the Alaska Panhandle to Canada’s Klondike, the tenuous but irrepressible White Pass & Yukon Route has been rescued from peril by a succession of improbable saviors, one of them the United States Army.