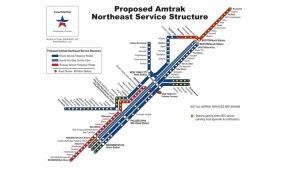 For almost half a century, passenger rail service in the United States has resided in the public sector. Despite its unusual statutory charter, Amtrak’s voting shares belong to the U.S. Department of Transportation. Every transit agency that runs trains in its metropolitan area is owned by some sort of public entity, whether based in state or local government, or a separate public-sector authority. Times are changing, though, and certain private-sector entities have expressed interest in running passenger railroads.