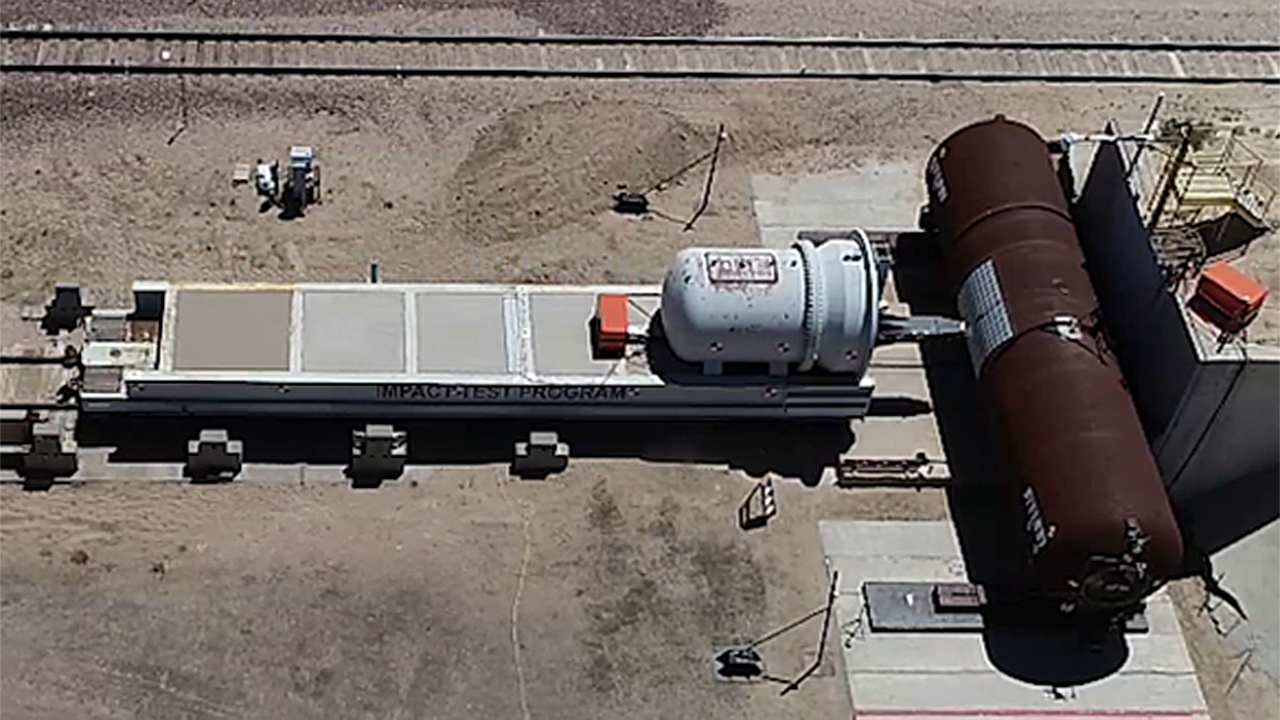 Approximately one out of every four railroad freight cars in North America is a tank car, according to the Association of American Railroads, Railroad Facts, 2019 Edition (p. 38). Each year, such cars transport roughly 2 million shipments of hazardous materials (hazmat), carrying goods that are essential to North America’s economy, public health and quality of life.

Railroad safety is the key to making it all work. Rail is recognized as the safest mode of transportation for moving bulk shipments of hazardous materials. Nevertheless, a train accident involving a hazmat release from a tank car can result in significant property and environmental damage, possible evacuation of nearby residents, and injuries or fatalities due to chemical exposure.

The severity of some recent train accidents involving hazmat releases has raised concerns about the crashworthiness of railroad tank cars under accident loading conditions. To meet this ongoing challenge, the Federal Railroad Administration (FRA) Office of Research, Development & Technology (RD&T) has established a hazmat and tank car research program designed to understand, evaluate, and make recommendations to reduce the risk of an unintended hazmat release.

Railroad tank car safety has improved substantially since the 1980s through cooperative testing, research, and standards development by industry and government. RD&T’s tank car research program goal is to improve the safety and integrity of tank cars and other packages carrying hazardous materials. One objective for this research is to develop more effective strategies for maintaining tank structural integrity under accident loading conditions. FRA-sponsored research includes studies on:

High-profile train accidents involving hazmat have prompted valid questions about the safe transportation of such materials by rail. However, rail accident data reveal that accidents and incidents involving railroad tank cars releasing hazmat fell dramatically in the 1980s and ’90s.

These reductions—and the associated safety improvement—can be attributed to regulations requiring tank car owners to install double-shelf couplers on all tank cars and to install head protection and thermal (fire) protection on certain tank cars based on the commodity transported.

A table summarizing tank car shell impact tests is shown in Table 1. Some of these tests were performed as a part of collaboration with industry through FRA’s Next-Generation Rail Tank Car Project (NGRTCP, denoted with a † in the table).

Three catastrophic failures of tank cars carrying TIH—in accidents near Minot, North Dakota, in January 2002; in Macdona, Tex., in June 2004; and in Graniteville, S.C., in January 2005—triggered further research on their structural integrity. Subsequent FRA work on the crashworthiness and puncture resistance of railroads tank cars, the mechanical behavior of tank car steels, and the dynamics of freight cars involved in derailments, directly addressed recommendations made by NTSB after the Board’s investigations of these accidents.

In the early 2010s, demand for general-purpose tank cars carrying ethanol, crude oil, and gasoline mixtures (i.e., flammable liquid hazmat) increased exponentially. And more flammable liquid shipments resulted in more accidents involving these commodities: in Lac-Mégantic, Québec, in July 2013; in Casselton, North Dakota, in December 2013; and in Plaster Rock, New Brunswick, in January 2014. The accident in Lac-Mégantic was particularly devastating because a number of the derailed tank cars carrying crude oil were punctured and failed, causing a catastrophic conflagration that led to 47 fatalities and three others missing and presumed dead.

FRA RD&T acted quickly by adapting its programs to meet this emerging challenge. Research, which began prior to the Lac-Mégantic disaster, was accelerated to estimate the crashworthiness and puncture resistance of general purpose tank cars. Beginning in late 2013 at TTC, FRA conducted a series of full-scale shell impact tests of tank cars used to transport flammable liquid hazmat. This testing would eventually include specification DOT-111, DOT-117, and AAR CPC-1232 tank cars.

FRA and its research partners conducted FEA to plan for the impact conditions and determine an appropriate test speed. The various specification tank cars were subjected to approximately the same test conditions and impact speeds. The DOT-111 and AAR CPC-1232 tank cars punctured, while the DOT-117 did not. This impact testing program ultimately contributed to the development of a new tank car specification, DOT-117, specifically for the transportation of flammable liquids such as crude oil and ethanol.

A spike in U.S. natural gas production in the late 2010s generated interest in using DOT-113 tank cars to transport liquefied natural gas (LNG), a cryogenic liquid. Due to the unique properties of cryogenic liquids and the need to keep them at an extremely low temperature, a DOT-113 tank car is a “tank-within-a-tank” design that differs substantially from previously tested specification tank cars. FRA RD&T has embarked on a new series of shell impact tests of DOT-113s to examine their puncture resistance in cryogenic service. A DOT-113 filled with water was first tested in November 2019. The second test, using a surrogate outer tank made of a thicker steel alloy and water as lading, was performed in June 2020.

With the successful completion of the June 2020 tank car impact test, PHMSA, in collaboration with FRA, published a Final Rule in July which permits the transportation of LNG via a newly specified tank car; it features several required upgrades over the existing specification, including an outer tank made of TC128 steel that is 1/8-inch thicker than the current specification tank car.

Two additional tests are planned in the cryogenic tank car test series. The third test of the series will be a tank car filled with a cryogenic liquid (nitrogen) instead of water. This test studies the effects of cryogenic temperatures on the overall response and puncture behavior of the steel in the inner tank. The fourth test in this series will be on a newly constructed tank car meeting the new specification, but with liquid nitrogen as lading. These last two tests are planned for 2021 and 2022, respectively.

Francisco González, III is the project manager for the Hazardous Materials Research Program at the FRA RD&T. He has 30 years of experience with FRA as a Safety Inspector (1995-1998), Supervisory Railroad Safety Specialist (1998-2005), and in his current role as Program Manager for RD&T (2005-present). He has a wealth of knowledge on domestic and international hazardous material transportation regulations and serves as a liaison with the Mexican Regulatory Agency of Rail Transport. Given his bilingual expertise, González has played a key role in assisting USDOT with issues involving Latin American shippers and railroads. He is a member of several professional associations and actively participates on TRB committees for hazardous materials transportation.