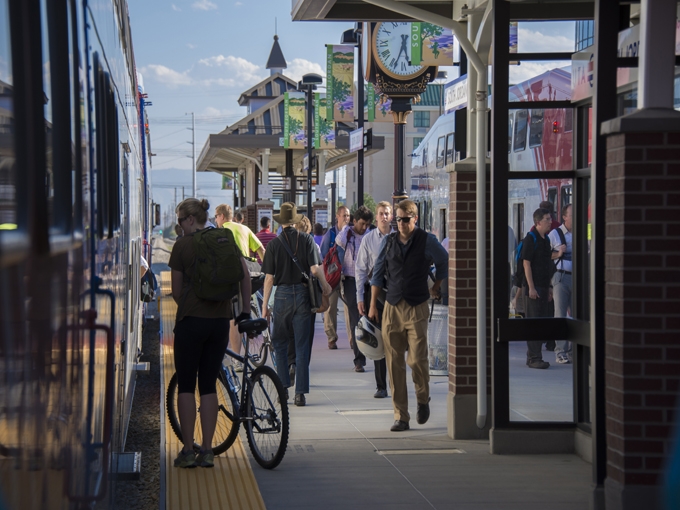 Efficiency and effectiveness are the hallmark of award-winning Utah Transit Authority.

Now that its FrontLines 2015 program, a group of five Utah Transit Authority rail projects that added 70 miles to the existing 64-mile rail network, has been completed $300 million under budget and two years ahead of schedule, UTA’s main focus is on increasing frequency of service and better connections. And it’s well on its way.

UTA says its ridership growth more than doubled compared to the national average in 2014—2.17% vs. 0.95% the previous year. Ridership on its FrontRunner regional rail service increased by 15%. Overall, UTA saw a record ridership with more than 45 million boardings in 2014. UTA attributes this success, in part, to last year being the first full year of operation for new rail lines opened under FrontLines 2015, as well as its S-Line streetcar in the Sugarhouse neighborhood, which opened in December 2013.

UTA’s record year of ridership led to the agency receiving one of the biggest awards in the public transportation industry in 2014 for its service and effectiveness. The American Public Transportation Association (APTA) named UTA the Outstanding Transportation System of 2014.

“This is a great honor that would not have been possible without the dedication of UTA employees and the continued support of our riders,” said UTA General Manager Michael Allegra. “We’re pleased to be recognized for our accomplishments and confident that we’ll continue to grow, improve and provide efficient, innovative public transit for residents of the Watsatch Front.”

The Outstanding Transportation System award is given to organizations in the United States and Canada that have demonstrated efficiency and effectiveness and have made exceptional contributions to the public transportation industry. Three awards are given each year based on transit system size. UTA won the award in the largest category, for systems providing 20 million or more annual passenger trips.

In addition to increased ridership, UTA set a record in 2014 for on-time performance in both of its rail-oriented modes of transportation—94.57% in TRAX light rail and 92% in FrontRunner commuter rail. UTA is moving ahead on three transit-oriented developments (TOD). In 2014, the agency broke ground on the first two phases of the Sandy TOD; Jordan Valley TOD received approval from the board and West Jordan City for the site and development plan, as well as developer financing; and the Clearfield TOD received approval from the board and the city of site master plan. Design is under way.

“The building of transit oriented development is just one way the Wasatch Front can prepare for future growth,” said Allegra. “The combination of residential, retail and commercial properties with transit helps air quality, population growth and generally makes life better for those that live here. This is a new trend for our community and a catalyst for change.”

Last year, UTA says, it restructured its public safety department for increased outreach and better efficiency, leading to the agency’s best safety record to date, with zero fatalities on the system in 2014.

All modes were below their accident goals, including major accidents on TRAX, which were down 30%. UTA will introduce a number of service improvements that will take effect August 16, 2015. These changes include extended hours on TRAX and the S-Line and increased service on select bus routes.

“UTA has a long tradition of coming in under budget due to our capable staff operating in a lean and efficient manner,” Allegra said. “This year, we achieved enough savings that we are able to invest in service beyond what we had already planned for our upcoming change day.”

In addition to service enhancements, UTA will once again offer FAREPAY discounts of up to 20% on TRAX and FrontRunner, and will add a new 40% FAREPAY discount for bus riders. UTA will also offer its popular $10 Group Pass, which allows up to four people to make a round trip on buses, TRAX and FrontRunner between 8:30 a.m. and midnight on the day of purchase. Both the FAREPAY promotion and the Group Pass special pricing will begin July 1 and run through Dec. 31. These fare promotions, UTA said, are designed to thank riders for 45 years of support and encourage them to take advantage of UTA’s new summer holiday schedule, as the agency now offers service on many holidays including Independence Day, Pioneer Day and Labor Day.

“This year, as we celebrate more than four decades of service, we wanted a way to say thank you to our riders,” Allegra said. “We hope FAREPAY promotion and our new Group Pass pricing make it more convenient for families and groups to ride UTA to events and celebrations taking place this summer.”

“As with its service changes, UTA staff continues to look for opportunities to introduce strategic fare products and promotions in response to emerging market opportunities and to introduce our services to new riders,” the agency said.

UTA has been chosen to host several major transportation conferences this year, including the APTA Rail Conference and International Rail Rodeo. The APTA event is expected to bring nearly 2,000 global transit representatives to Salt Lake City, showcasing the recently completed FrontLines 2015 rail expansion program and generating millions of dollars for the local economy, the agency said.

In addition to the APTA Rail Conference, UTA also hosted the Smart Card Alliance Payments Summit in February and the National Transit Institute Transit Academy in April, and will also be hosting the APTA Risk Management Seminar in June.

Allegra credits UTA’s outreach efforts for helping draw these visitors to the state. Over the past two years, UTA has invested $800,000 in travel to pursue numerous competitive funding opportunities, to learn best industry practices used by other transit agencies, and to take part in groundbreaking transit think tanks and seminars. Utah residents “see a return on that investment many times over,” Allegra said, in the form of money generated by conferences, federal transportation grants and cost-saving improvements to the UTA system.