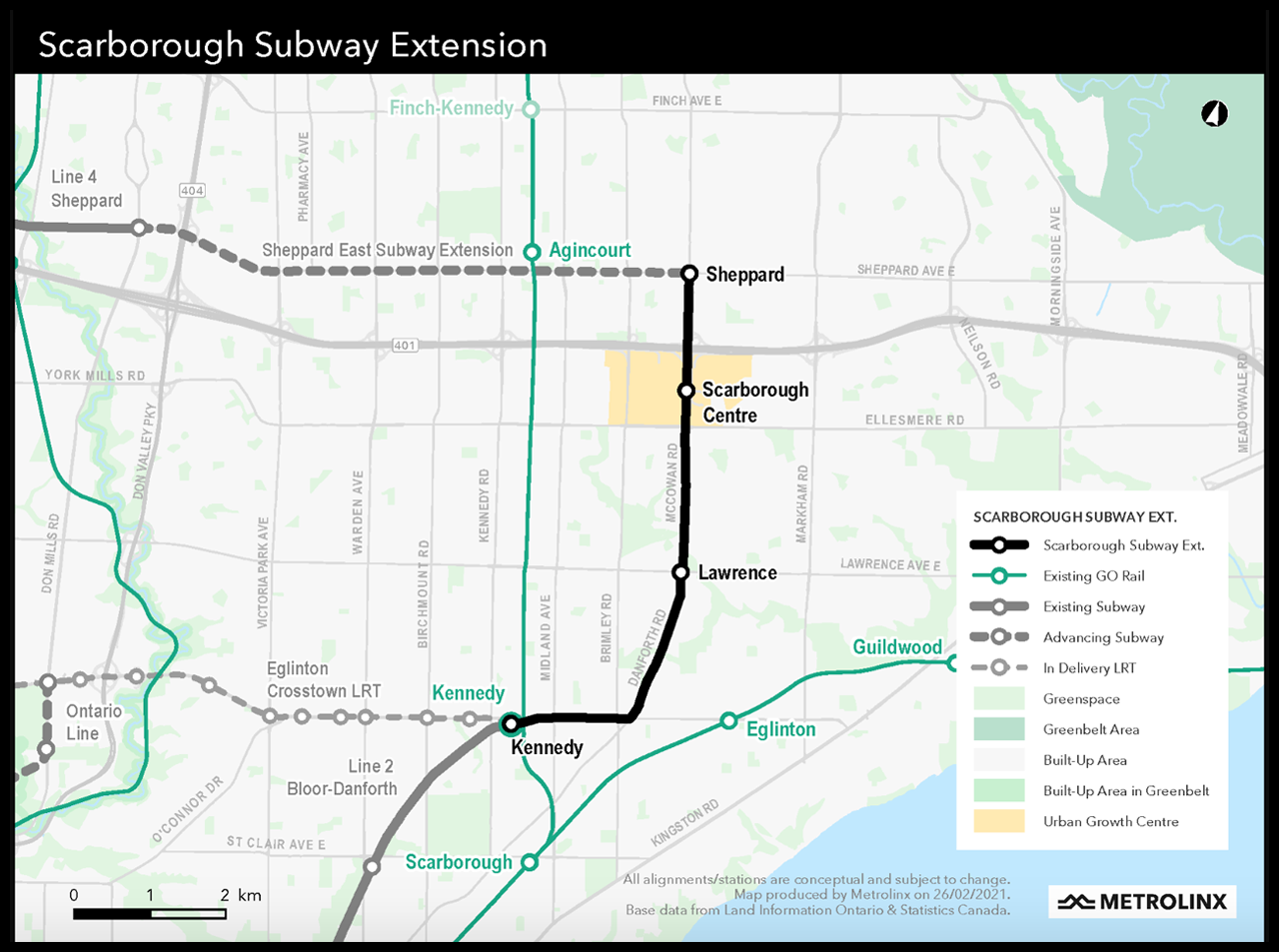 The C$5.5 billion Scarborough project will extend Toronto Transit Commission’s (TTC) Bloor-Danforth Line 2 subway 4.8 miles (7.8 kilometers) from Kennedy Station to a new terminus at Sheppard Avenue and McCowan Road (see map above). It will include three stations, and provide up to six connections with other transit options, including one GO Train line (Stouffville); up to two local rapid transit lines (Line 5/Eglinton Crosstown and the future Sheppard Subway Extension); and three bus services (GO Transit, Durham Region Transit and TTC buses). Completion is expected by 2029-30, with 105,000 daily boardings by 2041.

The scope of SRS work includes:

The SRS package is being delivered using a Progressive Design-Build (PDB) model, which “incorporates a multi-stage design process called a development phase,” Infrastructure Ontario and Metrolinx reported. “This phase allows for a collaborative approach between the project owner, the contracting partner and other stakeholders who work closely together to finalize the scope, risk allocation and pricing of various elements of the project.”

The SRS development phase is expected to be completed in approximately 18 to 24 months. Then, Metrolinx and Scarborough Transit Connect “will have the option to sign a final agreement to proceed to the construction phase, which would include agreements on detailed designs and a negotiated price,” according to Infrastructure Ontario and Metrolinx.

Metrolinx is delivering the extension project in two contracts: the SRS contract and the Advance Tunnel contract. Metrolinx and Infrastructure Ontario in May 2021 awarded the C$757.1 million tunneling contract to Strabag; a groundbreaking was held June 23, 2021.

The subway will remain publicly owned by the Province of Ontario and will be operated by TTC as part of Line 2.

The Scarborough Subway Extension is part of a C$28.5 billion subway expansion program for the Greater Toronto and Hamilton Area, which the government of Ontario announced in April 2019. The program also includes these three projects: a new Ontario Line (a nearly 16-kilometer or 9.94-mile free-standing line); the Eglinton Crosstown West Extension (extending the Eglinton Crosstown LRT 9.2 kilometers or 5.72 miles); and the Yonge North Subway Extension (a 8-kilometer or 4.97-mile extension, bringing TTC’s existing Line 1 subway to the cities of Vaughan, Markham and Richmond Hill). The projects are being procured and delivered by Infrastructure Ontario and Metrolinx.