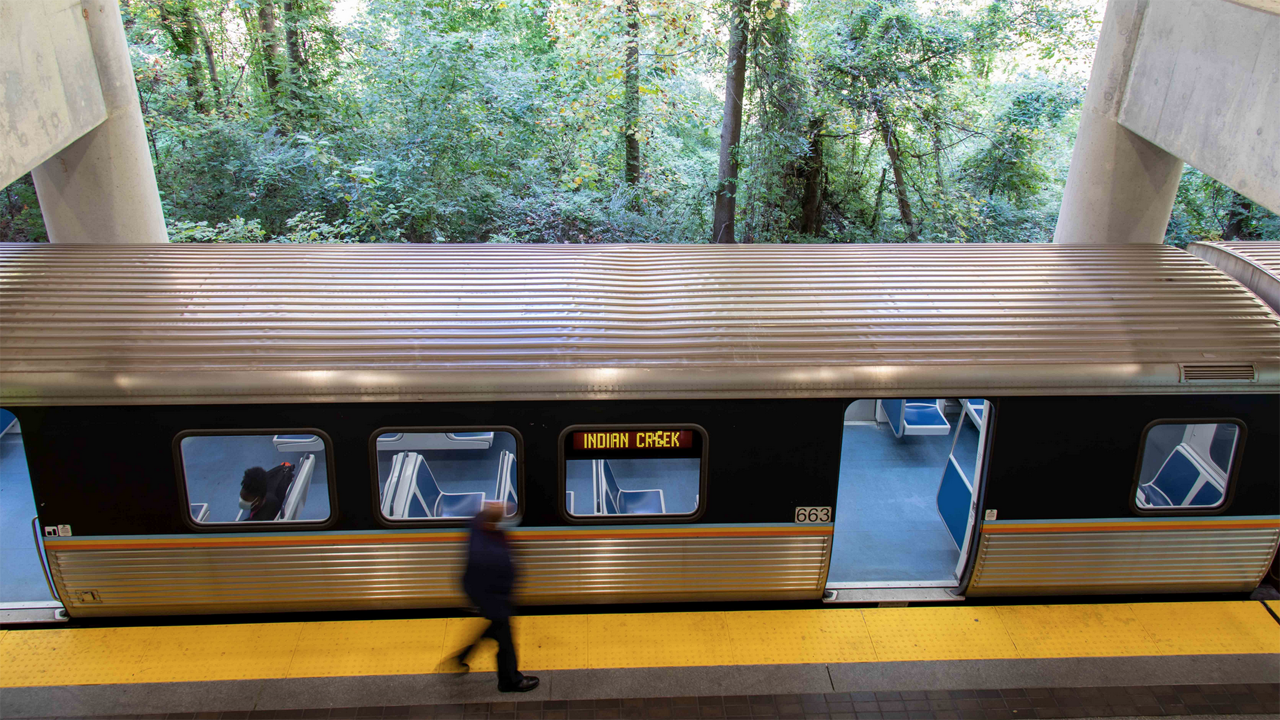 The MARTA Board of Directors on July 14 advanced pre-development work on two transit-oriented development (TOD) projects on the East/West Line, with the award of master planning contracts for Indian Creek and H.E. Holmes Stations and surrounding areas, and approval to issue a TOD request for proposals (RFP) for Indian Creek.

The Indian Creek TOD RFP approval, MARTA says, positions the property equally with TODs at H.E. Holmes and Kensington Stations, which received previous board support. Next, MARTA and its consultants will complete the master planning and rezoning of these significant land areas, then issue TOD RFPs to the development community.

The Board also awarded master planning contracts to WSP for Indian Creek and HKS for H.E. Holmes. Both firms, MARTA says, “bring teams with a depth of experience in both planning and community engagement.” Indian Creek and H.E. Holmes are end-of-line stations, residing at the westernmost and easternmost points of the Blue Line and together have significant land area for development, with 52 and 22 acres respectively.

“Development at and around these rail stations presents a significant opportunity to benefit the surrounding communities while allowing for an increase in ridership and a better overall experience for our customers,” said MARTA Interim General Manager and CEO Collie Greenwood.

MARTA, which has been a member of these communities in unincorporated DeKalb County and the City of Atlanta for decades, says the master planning efforts will “provide stakeholders the opportunity to help shape an equitable, mixed use development plan.”

According to MARTA, the Blue/Green Line is experiencing significant TOD activity, including the grand opening of a mixed-income multifamily community; Marchon, at King Memorial Station, the near complete mixed-income multifamily community; Quill, at Edgewood/Candler Park Station, a senior affordable housing project that will break ground at Avondale Station this fall; a partnership with the Housing Authority of DeKalb County for a 250-unit affordable community at Kensington Station; and the recent issuance of a TOD RFP for Bankhead Station.

VRE passengers will ride free during September and between certain stations in Northern Virginia and the District of Columbia during October, following a vote of the VRE Operations Board on July 15. VRE says the decision to suspend fares will make VRE a “more attractive and viable option” for Metrorail riders during the closure of Blue and Yellow Line stations south of Reagan National Airport, slated to begin September 10, and those returning to work post-Labor Day.

“VRE will be a major contributor to mitigation efforts in the region during the first part of the Metrorail shutdown, which is expected to last six weeks,” said VRE CEO Rich Dalton. “The temporary elimination of fares will maximize VRE’s usage.”

Fare-free rides in September will be systemwide. In October they will be limited to travel between the six VRE stations most impacted by the Blue Line station closures–Backlick Road on the Manassas Line; Franconia-Springfield on the Fredericksburg Line; and Alexandria, Crystal City, L’Enfant and Union Station on both lines.

“A fare-free September is also VRE’s way of saying thanks to those passengers who have stuck with us through the pandemic,” said VRE Operations Board Chair Margaret Franklin, “and it’s a wonderful way to celebrate VRE’s 30th anniversary.”

Parking is free at most VRE stations, and VRE is considering free parking at the Franconia-Springfield parking garage for the duration of that station’s closure.

VRE adds that it welcomes full-size bicycles on all trains, eliminating the “first-mile last-mile conundrum” for many commuters.

WMATA announced on July 15 travel alternatives to help customers prepare for major Blue and Yellow Line construction this fall. Beginning Saturday, Sept. 10, WMATA will begin work to connect the future Potomac Yard Station with the mainline rail system and to rehabilitate the Yellow Line tunnel and bridge between Pentagon and L’Enfant Plaza Stations. The projects, WMATA says, will impact Blue and Yellow Line service in two phases over eight months, and free shuttle bus service will be available for customers throughout the duration.

“This fall, Metro will advance several major construction projects funded in our 10-year, $15 billion capital program,” said WMATA Interim General Manager and CEO Andrew Off. “The project teams understand that station closures and service changes can be very disruptive to our customers, and we are working hard to use the closure time efficiently. These projects are carefully coordinated with the local jurisdictions to ensure convenient, reliable service is available across the region while we complete this critical work to maintain and improve our system.”

WMATA will connect new tracks to “tie in” the new Potomac Yard Station to the Metrorail system and ensure proper signal integration. This six-week project will require the closure of six Blue and Yellow Line stations south of Reagan National Airport through Oct. 22. Once additional testing and training are completed, WMATA says the Potomac Yard Station is expected to open later this fall.

A major rehabilitation of the Yellow Line tunnel near L’Enfant Plaza Station and the bridge across the Potomac River will begin at the same time as the Potomac Yard Station tie in and continue for eight months. WMATA’s chief engineer has identified the steel-lined tunnel near L’Enfant Plaza as the agency’s top structural priority, with repairs needed to stop water intrusion and strengthen the tunnel lining. WMATA will also remove and replace miles of critical communications cables used by multiple jurisdictions and repair the Yellow Line bridge during the closure.

“Our investments in capital improvements are a critical part of our commitment to safety,” said WMATA Board Chairman Paul Smedberg. “Year-over-year the Board has made capital funding a priority and continues to support projects like these that strengthen our overall infrastructure throughout the region.”