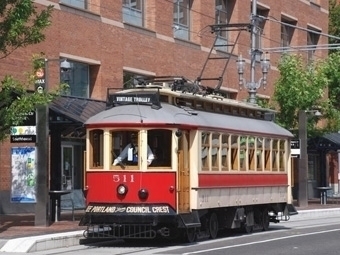 Officials from both municipalities marked the event launching the two-mile, $43 million project, which still hopes for an official opening in late 2016, though the target date is greeted with skepticism in some quarters.

“Today we go back to the future,” said St. Louis Mayor Francis Slay. “The Loop, of course, actually got its name from the streetcar system that serviced this area, connecting people to restaurants, shopping, entertainment and jobs.”

Added University City Mayor Shelley Welsch, “This day has been a long time in coming . . . The idea for the Loop Trolley was born in the last century.”

The planned 2.2-mile project has struggled. The Federal Transit Administration in 2013 threatened to withdraw more than $22 million in federal funding after the project was plagued by delays. But last year, FTA notified project planners that they had met all of the conditions to keep the funding.