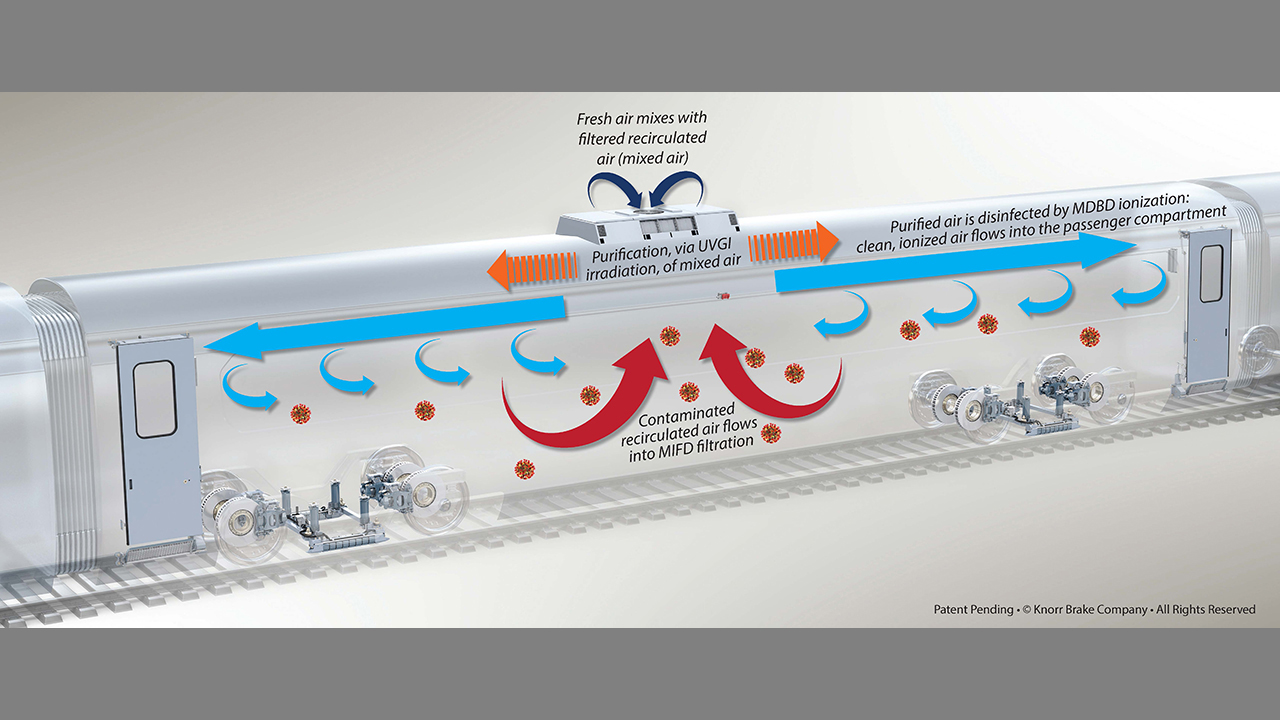 KBC, a subsidiary of Munich, Germany-based Knorr-Bremse, launched the 3-Stage Air Filtration and Purification System in North America in June 2020. It is used with railcar HVAC systems and is said to work “continuously during vehicle operation to filter and purify the recirculated air.”

Knorr Brake Company (KBC) has completed the second round of testing of its 3-Stage Air Filtration and Purification System for passenger railcars.

The company reported that the antimicrobial system is “99.9% effective in removing even the most difficult-to-eradicate contagions after just one minute. The testing demonstrated even higher efficacy rates against more easily inactivated viruses and bacteria and against all categories of aerosolized viruses after three and five minutes of contact time.”

KBC, a subsidiary of Munich, Germany-based Knorr-Bremse, launched the 3-Stage Air Filtration and Purification System in North America in June 2020. Configured by Merak North America, a division of KBC, it is used with railcar HVAC systems and is said to work “continuously during vehicle operation to filter and purify the recirculated air.”

How Does the 3-Stage System Work?

• Step one, the filtration process, “incorporates electrostatic discharge to actively target viruses, and then uses physical filtration to remove the charged particles and reduce and halt transmission.”

• Step three, the disinfection process, “works through bipolar ionization. The ions travel through the air and attack pollutants, chemically decomposing them into harmless water and carbon dioxide. In addition, the ions can travel deeply through the air distribution ducts of the car and into the vehicle interior to provide purification on surfaces in the passenger area.”

The latest round of testing, conducted after one-, three- and five-minute contact times, was performed with MS2 Bacteriophage (MS2). MS2 is “a small virus that is recognized by the EPA as one of the most difficult types to inactivate and, therefore, is considered a representative virus screening tool,” KBC said. “The MS2 virus particulate is smaller than others, such as the COVID-19 virus. Because of its size, MS2 is harder to capture, more difficult to irradiate in terms of surface area, and requires significantly more radiation to inactivate.”

Additional testing was performed with another live microorganism, E. coli, using the same shortened contact times to demonstrate the system’s efficacy against bacterium.

At one minute, testing showed that the 3-Stage Air Filtration and Purification System achieved 99.896% efficacy against MS2, according to KBC. After five minutes, the system reached 99.98%, “which is just under sanitation level, or 99.99%—the equivalent to using standard hand sanitizer,” the company reported. Additionally, as soon as one minute, the 3-Stage System achieved up to 99.998% efficacy against E. coli, KBC said.

The company noted that “in comparing the different reductions of virus particles for different time periods, it may be more meaningful to consider actual viral load concentrations per meter as an indication of the system’s efficacy, rather than percentage reduction differences. Even though percentage values may appear high, they may not be as indicative of the actual number of virus that remain, since an aerosolized virus experiences natural die-off and gravitational settling. In terms of order of magnitude, when compared to a result of 99.9%, there are roughly 5,000 times fewer virus per cubic meter with a result of 99.99998%.”

“The results definitively demonstrate that the 3-Stage Air Filtration and Purification System is effective not only on the continuing threat of the COVID-19 virus and its variants, but that it will provide the same level of protection against natural bacteria, H1N1 influenza, E. coli, staph, H3N2 influenza, plus the fungus that causes black mold—elements critical to contain for ongoing safe operation throughout the year,” KBC President and CEO Jason Connell said. “By deploying this system, rail operators will be able to optimize their existing cleaning regimens and further streamline ongoing maintenance. It will also enable operators to promote the use of a proven, independently validated filtration and purification system, encouraging people to come back to public transport, and contributing to restored ridership levels and increased revenue.”

KBC said it is continuing to work with the EPA “to conduct a battery of additional independent tests in the EPA-operated aerosol testing facility to gain still further insights into the operation and efficacy of the 3-Stage engineered solution.”