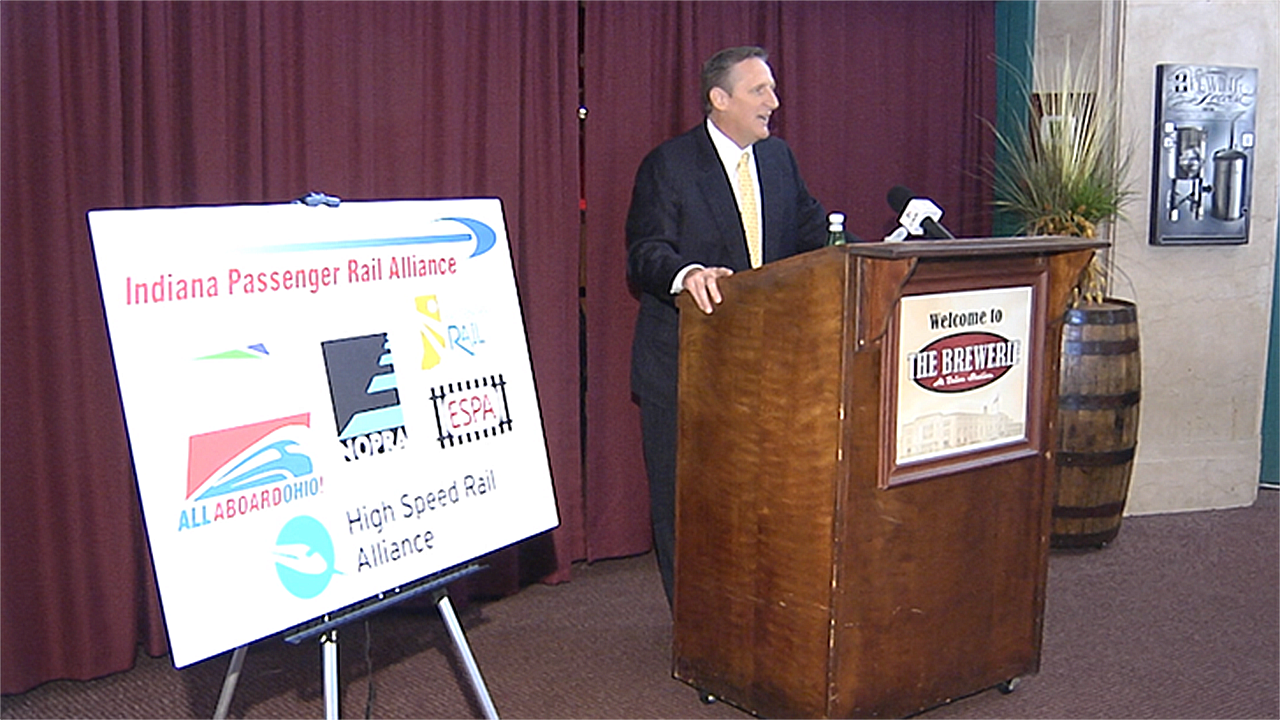 This report comes to you from Amtrak Train 49, the Lake Shore Limited, en route from New York to Chicago. While this is an unusual location from which to file a story, it is appropriate in this case, as we report that a new alliance has been formed to advocate for more trains on the Lake Shore Limited’s route.

AAE was chosen as the lead organization because of the city’s central location on the route. “Erie’s going to be the heart of this alliance” board member and former head Brian Pitzer told the Erie Times-News. “That’s big for Erie, because for so long, Erie has been the missing link between the East Coast and the Midwest.”

AAE was founded in 2009 and has remained small until now, with a local orientation. Pitzer sees that as an asset and told Railway Age: “Being a small organization meant we didn’t have a lot of inertia to overcome. We hope to grasp the enormity of what we’re trying to undertake” with a coalition spanning 1,000 miles.

LRA’s new Executive Director, Michael Fuhrman, does not have a background as a rail advocate, although he lived in Germany for three years and experienced that country’s robust network of passenger trains and rail transit. He comes to AAE and the LRA from experience managing civic organizations in Erie, which he sees as an asset when it comes to promoting rail to business leaders and elected officials.

Fuhrman told the Times-News that the Lakeshore Corridor is the second-most-important transportation corridor east of the Mississippi and added: “It connects the Great Lakes megaregion of 55 million people with the Northeast Megaregion of 52 million people—the two largest of the 11 megaregions of the U.S. No other corridor between those two areas is better suited for development of passenger rail.”

Other advocates, both from the Lakeshore service area and elsewhere, were instrumental in getting the new organization going. One is Ed D’Amato, based in the Cleveland area. He credits George Chilson, former President of the Rail Passengers Association (RPA), who now lives in San Diego, and Rick Harnish, head of the High-Speed Rail Association. “Local governments are on board, but we need an organizing force,” D’Amato told Railway Age. “We need to bring in new voices—we’re trying to build a choir here.” Bill Hutchinson, another advocate who previously lived in Ohio and participated in the discussions about forming the new alliance, told Railway Age: “Zoom calls gave us the capability we never had before.”

LRA is pushing a plan that Harnish first proposed in 2011. It calls for four daily trains between New York and Chicago, spaced through the day. There would still be otherAmtrak Empire Service trains between New York and Buffalo, and the Capitol Limited would still run to Washington, DC. Harnish’s proposed schedules are several hours faster than today’s. Given current economic and political circumstances, the four-train schedule that Harnish proposed and the work required to reduce scheduled travel time appear to be a hard sell. Despite that, Hutchinson said that pushing for four trains might improve the likelihood of getting a second train on the route someday, or even a third.

Richard Rudolph, Chair of the Rail Users’ Network (RUN), expressed his concerns about the proposed four-train schedule. “Four trains would be great, but is it realistic?” he asked. He agreed that there should be at least two trains on the route, and suggested that one of them should run through between Boston and Chicago, without having to take the time required for switching and connections at Albany. Indiana advocate and Amtrak retiree Phil Streby, who also serves on the Boards of RUN and the RPA, told Railway Age that there used to be a third track on much of the western portion of the route, and a fourth track in places. He said that restoring that trackage would shorten the schedule, although he did not mention that it would be expensive.

Rudolph also speculated that Amtrak could add service to existing National Network routes without running afoul of the provision of the Passenger Rail Investment and Improvement Act of 2008 (PRIIA), which limits that network to routes operating when it was enacted. Time will tell if his conjecture is correct.

The Lakeshore Rail Alliance represents a new concept in advocacy: an alliance of organizations working together to promote an Amtrak route. Advocacy organizations have joined together in the past, but not in the same manner or for the same purpose.

From 2006 to 2010, advocates in New Jersey (including this writer) formed an alliance with RUN, RPA and a number of local organizations elsewhere to fight against a proposed deep-cavern terminal and other features of the former Access to the Region’s Core (ARC) Project, predecessor to today’s Gateway Program.

The Texas Eagle Marketing and Performance Organization (TEMPO) was a consortium of advocates and business leaders along that train’s route who participated in promoting the train and other activities designed to enhance its revenue. The group operated under Amtrak auspices and with Amtrak participation from 1999 until 2017, when Amtrak disbanded it.

The LRA is different. Its members plan to keep it going permanently, and it is independent of Amtrak. There is currently no organization representing Massachusetts riders who take the train, although Fuhrman says that a group from Michigan wants to get involved. For now, though, Fuhrman told Railway Age that he plans to start by creating “a structure where Lakeshore constituencies can speak with one voice to elected officials and business leaders.”

Will the newly formed alliance succeed in getting the four-train schedule between New York and Chicago that Harnish first proposed for the route a decade ago, or even getting one more train added to the current schedule? Perhaps more important, will this model of local and regional rider advocacy organizations coming together to work for improvements along a long-distance route catch on elsewhere in the Amtrak system?

In the meantime, a number of advocates along a lengthy Amtrak route have done something innovative by agreeing to work together toward improving service on it, and perhaps also by centering their organization in a city in the middle of the line—a place that does not bear much resemblance to the big cities at both ends.