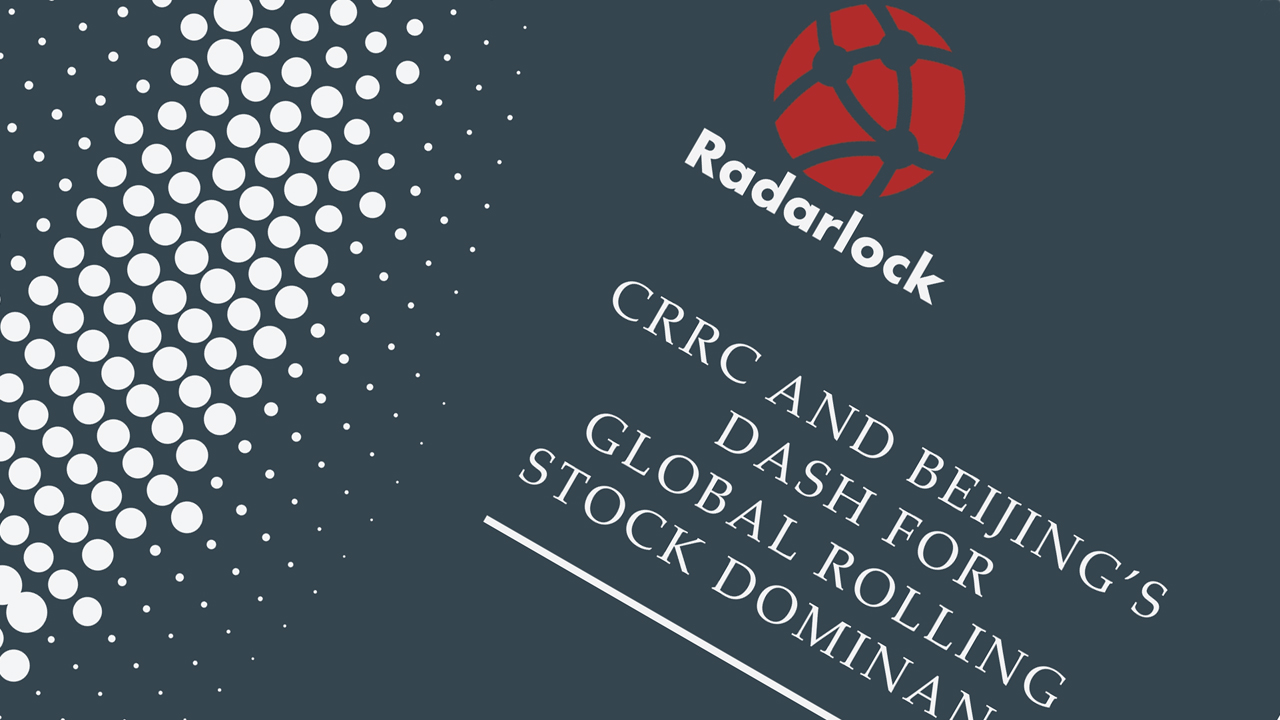 “CRRC AND BEIJING’S DASH FOR GLOBAL ROLLING STOCK DOMINANCE,” a report prepared by Radarlock, which describes itself as “a research organization that uses data-driven analysis to understand techno-economic dynamics in world affairs,” says that China Railway Rolling Stock Corp. (CRRC) is an arm of the Chinese government with “indelible ties to the Chinese Communist Party,” and whose executives “wear dual hats as corporate and as Party leaders.”

“This report underscores the fact that CRRC is controlled by the Chinese government and has made crystal clear its desire to decimate the railcar manufacturing industry in the United States and the thousands of Americans it employs,” Railway Supply Institute (RSI) President Mike O’Malley told Railway Age.

Following is an excerpt of the report, prepared by Radarlock’s Emily de La Bruyère and Nathan Picarsic:

“In terms of direct financial support, CRRC is one of the most heavily subsidized companies in China. Since 2015, CRRC has reported a total of 5.4 billion RMB (almost $800 million USD) in direct subsidies, with 1.37 billion RMB (approximately $191 million USD) in 2018. CRRC is expanding its global presence—internationalizing, acquiring foreign technologies and collecting global data—in concert with not just the CCP (Chinese Communist Party), but also military actors. CRRC’s annual report explicitly declares its dedication to Beijing’s military-civil fusion (MCF) strategy: ‘We will implement the military-civil fusion development strategy and expand the application of technology and products,’ writes the company, alongside commitments to One Belt One Road (OBOR); Made in China 2025, Beijing’s ambitions to become a ‘Manufacturing Great Power’; the Internet Plus program that underlies the social credit system; and the ‘Go Out’ policy. CRRC also works with other, less explicitly military players that the United States has already labeled as predatory actors or national security threats. For example, CRRC actively cooperates with Huawei, connecting the physical infrastructure of rail to Huawei’s information technology networks in pursuit of a government-linked ‘Internet of Things with Chinese characteristics.’ These connections are not accidental. CRRC is clear in its mandate that its chief obligation is to the Chinese State. The nature and status of company personnel reveal indelible ties to the CCP. Most of the managers are directly appointed for political purposes. Executives at CRRC wear dual hats as corporate and as Party leaders.”

RSI has circulated the Radarlock report to its member companies as well as on Capitol Hill. In Should [Washington] Metro Worry About Chinese Railcars? Just Buy American, an opinion piece published by The Hill, O’Malley refers to theproposed federal funding ban on new procurements of mass transit railcars or buses from companies owned or subsidized by the government of the People’s Republic of China, if the procurement uses any Federal Transit Administration formula or bus funding. The ban is included in the National Defense Authorization Act (NDAA):

“Opponents of the measure have stepped up their defense with a consistent retort—that there is no American manufacturing of passenger railcars, suggesting that Chinese state-owned enterprises such as CRRC are somehow indistinguishable from the other private companies with which it competes in the United States. American jobs and businesses are not at stake, they argue, because the companies CRRC competes with are similarly “foreign-owned” companies.

“That could not be further from the truth.

“Indeed, the companies CRRC competes with can all trace their roots back to countries outside the United States, companies that include well known multinational corporations such as Siemens, Alstom, Kawasaki, Hyundai Rotem, Stadler and Bombardier.

“But there are two key distinctions that make all of these companies entirely different from CRRC. Not only are they not state-owned enterprises (SOEs) that answer only to a sovereign government, but they also are very much American manufacturers. Much like their relatives in the automotive sector, companies such as Siemens, Alstom, Bombardier and Kawasaki have rich histories in the United States that stretch back decades or longer.”

Similarly, the Alliance for American Manufacturing, commenting on the Radarlock report, said, “China’s SOEs like CRRC and [automobile manufacturer] BYD are part of China’s plan to dominate entire industries, and pose major economic and national security threats. U.S. taxpayer money shouldn’t be used to subsidize the ambitions of the Chinese State. Whether Congress passes a full NDAA or the slimmed-down version, it’s time for lawmakers to ban Chinese SOEs from building railcars and buses.”

CRRC has been aggressively pushing back against growing evidence that it is a Chinese SOE, releasing an infographic and establishing a website.