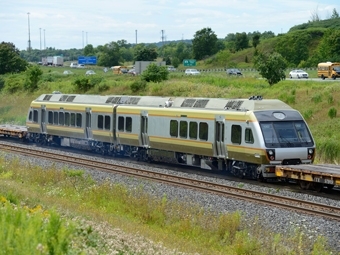 The decision, apparently reached earlier this month, has cheered Ontario passenger rail advocates who have argued the route should have been planned for electrified service from the outset. Union Pearson Express is scheduled to open for service this summer, in time for the Pan Am Games. Sumitomo diesel multiple-unit (DMU) trains will operate on the line.

Still unresolved, however, is funding for electrifying the line. But the electrification of the Kitchener GO Transit route toward the airport that will be used by UPX is widely expected to be the first phase of the overall electrification of the GO Transit network managed by Metrolinx, the public transportation agency overseeing the Greater Toronto and Hamilton Area.

Last August the first of 18 DMUs was delivered to GO Transit in preparation for the opening of the UPX line this year.