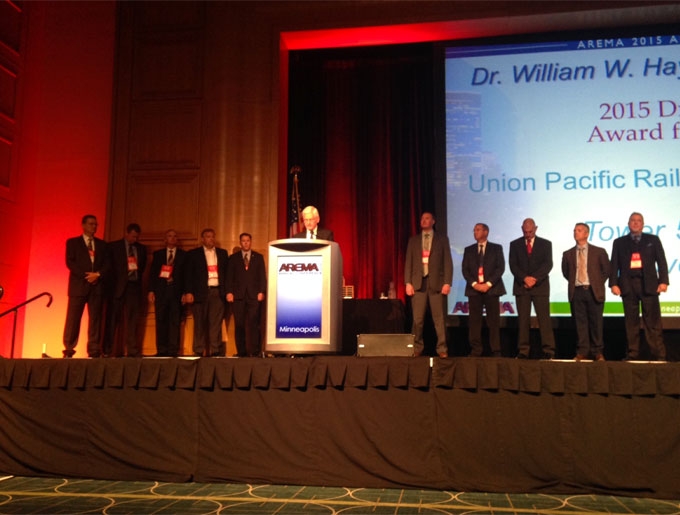 The American Railway Engineering and Maintenance-of-Way Association (AREMA) presented the 2015 Dr. William W. Hay Award for Excellence to Union Pacific and BNSF for the Tower 55 Multimodal Improvement Project in downtown Fort Worth, Texas.

Tower 55, first constructed in 1873, is a vital intersection for the national rail network, and it provides connectivity for freight and passenger travel between the West Coast, Midwest, Gulf Coast, Southeast, Canada and Mexico. Tower 55 is one of the busiest and most congested rail intersections in the United States. Nearly 100 trains move through the intersection daily carrying high priority intermodal goods moving across the nation, agricultural products destined for Gulf Coast ports, industrial and manufactured goods reaching throughout North America, low-sulfur coal bound for power plants in Texas and passengers aboard Amtrak’s Heartland Flyer and Texas Eagle service. An additional 43 commuter trains pass by on the adjacent Trinity Railway Express each week day.

This project eliminated three grade crossings and a critical chokepoint in the nation’s rail network. The improved traffic flow through this interlocking enhances the flow of commerce, minimize wait times for trains and reduces the number of blocked crossings.

This is the 17th year for the Hay award, which recognizes an outstanding achievement in railroad engineering and honors the memory of Dr. William Hay. The 20145 contest had three entries that were judged on three requirements: innovation, safety and project reliability.