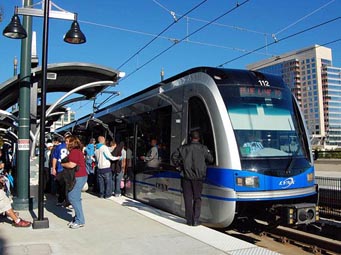 An array of new light rail transit (LRT) projects came out ahead of new Bus Rapid Transit (BRT) projects in a research study I presented earlier this month to the 12th National Light Rail Transit Conference in Salt Lake City, sponsored by the Transportation Research Board (TRB) and American Public Transportation Association (APTA). Co-authoring the study with me was my colleague Dave Dobbs.

Trying to convince the public and decision makers that public transit is a waste of money, critics of rail transit maintain a constant barrage of attacks on rail — but rarely in independent professional forums such as those sponsored by the TRB (an affiliate of the National Academy of Sciences).
In case you’re not aware, all papers accepted by the TRB for publication/presentation—including our own paper, titled “Comparative examination of New Start light rail transit, light railway, and bus rapid transit services opened from 2000″—must survive a rigorous (whew) peer-review process that scrutinizes their methodology and conclusions. (I’ll post a link to the paper if it becomes available online.)

Our study reviewed 20 LRT projects, five BRT projects, and one diesel multiple-unit (DMU) light railway, all opened since 2000. Major challenges we encountered, highlighted in the report, were that not only is there no standard, consistent process for evaluating how well these projects meet their goals, but in fact crucial data elements are either obscured or unavailable for convenient public access.

The availability of any BRT data was by far the worst problem. In contrast with the relatively meticulous projections required for new LRT starts, BRT projects seem to be waved through for approval with the barest minimum of an available data trail.

Data for DMU light railway projects were also a problem. In the end, we had consistent, reliable data for only one such project—North County Transportation District’s Sprinter line linking Oceanside and Escondido, California.

Eventually, our study had to be limited to comparing just three measures:

Incidentally, our study strictly defined BRT to refer to “bus services operating on exclusive or reserved alignments with in-line stations” — thus excluding so-called “BRT Lite” and similar operations in mixed traffic (that’s “rapid transit?). For each BRT project accepted for this study, only route segments in exclusive or reserved alignment (i.e., in “guideway”) were considered.

Because of the wide disparities between projects with little to no major civil works (bridges, tunnels, etc.) and those with them, capital cost was divided into two categories:

So, once the numbers were crunched, what were the results?

In average cost per mile for the Minimal installation projects studied, BRT did appear to have some advantage:

However, planners should keep in mind that (as we emphasized in our conclusions) total annualized cost is a far better gauge of cost-effectiveness than merely raw capital cost.

However, in terms of Substantial installation projects, BRT was pricier per mile than LRT by more than 5 times:

As we concluded, “These results suggest that BRT projects do not have any particular advantage when very heavy installation (tunnels, elevated structure, etc.) is involved.”

How well did LRT and BRT final costs compare with budget estimates? LRT again did better, exceeding budget by only 2% on average, while BRT averaged 35% above budget. The Sprinter DMU project, in comparison, exceeded budget by 38%.

In terms of ridership, we measured the rate at which each project was gaining ridership and compared this with the rate needed to achieve the planning forecast. Here again, while BRT averaged quite well (60% over target), LRT was the big over-achiever, exceeding the target ridership rate of increase by 230%. The Sprinter DMU line, unfortunately, was the big loser — coming short of the target by 20%.

So, what’s the bottom line? Our results tended to rebuff the common myth and misconception that BRT is “just like light rail, but cheaper.” While the Minimal BRT installations studied seemed to have modestly lower capital costs, BRT didn’t seem to have any particular advantage when very heavy installation (tunnels, elevated structure, etc.) was involved. Furthermore, LRT projects on average actually performed much better in terms of staying close to budget.

In terms of ridership, our results suggested that BRT is nowhere even close to LRT, which on average met ridership targets twice as well as the BRT projects.

However, perhaps our biggest finding was the astonishing lack of any consistent, standardized evaluatory procedure for these major public works projects, most of which involve hundreds of millions of dollars in investment. The need for such a standardized evaluation seemed to strike a responsive chord among many participants at the conference.

In my next article, I’ll focus on more details from our study — including more insight into the disparity between the relatively rigorous federal scrutiny of LRT projects vs. the comparatively facile approval of new BRT starts.