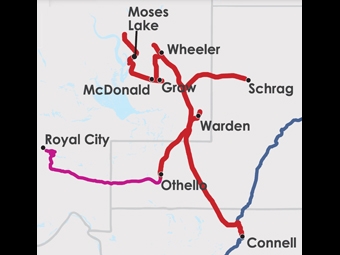 According to a recent Washington State Freight and Goods Transportation System report published by the Washington State Department of Transportation (WSDOT), the Columbia Basin Railroad (CBRR) line from Connell to Moses Lake/Wheeler is an “R2” Freight Rail Corridor, which handles one million to five million tons per year. In particular, the report from WSDOT shows the Columbia Basin Railroad as the busiest short line in eastern Washington.

With all of the economic development that has been occurring in Grant County (Moses Lake, Wheeler, and Warden) and Adams County (Schrag, Bruce, and Othello) over the past few years, the CBRR has become one of the busiest short lines in Washington State, hauling over 10,000 carloads annually of various agricultural and industrial commodities and other cargo for 60 active rail shippers in the Columbia Basin. More important, the various shippers or companies that haul cargo on the CBRR employ nearly 7,000 people in Grant and Adams Counties.

By comparison, most other short lines in Washington State handle much less tonnage and are classified R3 and R4 lines.

Last year, CBRR began bringing 110-car unit trains of canola seed to Pacific Coast Canola’s crushing and oil refining facility at the Port of Warden in Washington State, which is the first commercial-scale canola seed crushing operation west of the Rocky Mountains. “Having the ability to bring in unit trains into Warden on the Columbia Basin Railroad line to service companies such as Pacific Coast Canola is helping to establish the Port of Warden as a key location in Eastern Washington to handle freight,” said Port of Warden Commissioner Dale Pomeroy. “It is pivotal for our economic development and will provide low cost options that are critical for companies to competitively ship their goods to and from Warden.”

The CBRR also supports the Port of Moses Lake’s Northern Columbia Basin Railroad Project, a critical economic development, job creation, and freight mobility project in Washington State that will enhance and improve rail access to vital industries in the northern Columbia Basin area near Moses Lake. In particular, the Northern Columbia Basin Railroad Project will provide expanded freight rail service to the Moses Lake area, from the Wheeler Road Corridor across town to the Port of Moses Lake’s Grant County International Airport Industrial Area. In addition, the project is integral to preserving existing manufacturing jobs and related investment in central Washington, while helping to bring new business opportunities, job creation, and economic development to the region.

Furthermore, locations such as Bruce and Schrag in Adams County are becoming key agribusiness shipping hubs in eastern Washington, in which products such as grain and fertilizer are being shipped by rail. The CBRR believes that these locations have tremendous potential for increased economic growth, and is working with Adams County and the Port of Othello on improving rail infrastructure at Schrag and Bruce, respectively.

While the increasing business and economic development on the CBRR line is positive, because of the growth in rail traffic of all types of freight and commodities on the line, there are some infrastructure issues that will need be addressed at the Connell rail interchange, where the CBRR line intersects with the BNSF Railway main line. As a result, there have been discussions among various organizations such as the Great Northern Corridor Coalition, the WSDOT, the Washington State Department of Commerce, the Grant County Economic Development Council, and the Adams County Development Council about how to address the additional infrastructure needs at the Connell Rail Interchange.

CBRR is a locally owned and operated short line railroad headquartered in Yakima, Wash. Founded in 1986 by the Temple Family, CBRR has a long and successful history of operating rail lines in Washington State. In addition to the CBRR, the company also operates the Central Washington Railroad (Yakima-Moxee-Toppenish-Granger-Sunnyside Grandview-Prosser). In 2008, CBRR was recognized as the Short Line Railroad of the Year by BNSF.