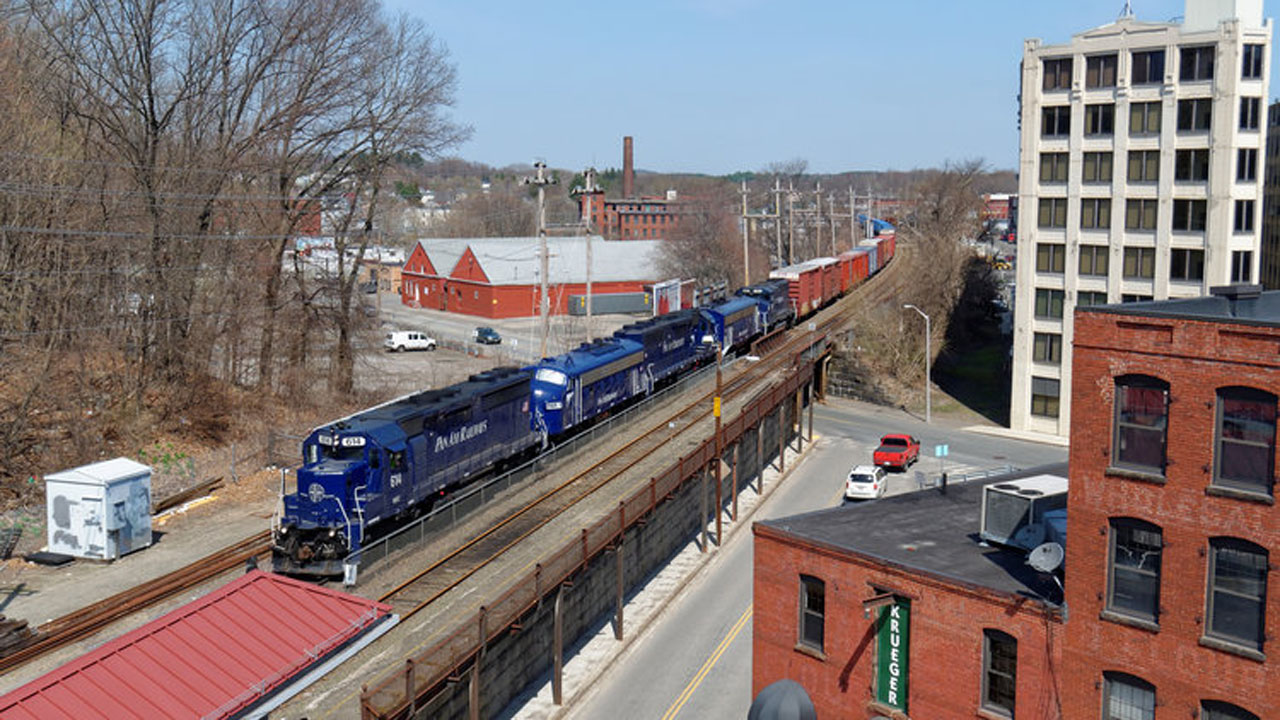 All photos via: panamrailways.com

An industry observer who spoke with Railway Age on the condition of anonymity said that Pan Am Railways is indeed for sale, with BMO Financial Group handling a transaction for principal owner Tim Mellon, 78, and other investors. Our source, an independent observer, outlined possible courses of action for the New England regional railroad, within the context of what’s going on in the marketplace.

“Here’s what I think is going on,” our source said. “Let’s suppose that Pan Am Railways owner Tim Mellon wants to hang it up, so Pan Am is on the block. You may want to take a look at the map and see how different pieces of Pan Am Railways fit with other things in the neighborhood, for example, the east-west main line across Massachusetts, in which it has a 50-50 ownership with Norfolk Southern (NS), the Pan Am Southern. Let’s suppose NS doesn’t want to play anymore, and it doesn’t want to buy the whole thing. NS has problems of its own: the highest operating ratio among the North American Class I’s … its marketing managers say ‘We want only quality revenue.’ This shows that NS is dismissing some of the lower-rated commodities. And of course, paper is one of the lower-rated commodities. So how much interest is there in NS taking over the whole thing? I’m not sure. NS made a big deal out of opening and then doubling the size of Bellevue Yard in Ohio some years ago, and now is closing it. So the shoes that fit yesterday may not fit today.

“Next, CN is expanding its footprint into the U.S. CN’s acquisition of the Messina Line in New York State from CSX has hit a snag at the STB, but it’s still under discussion. In Bill Vantuono’s podcast with CN President JJ Ruest, Ruest said, ‘We wish we had a roadmap that we could tell customers exactly how cars are going to move from here to there.’ Well, if CN owned the Pan Am it could put that on its roadmap.

“CN is also looking to create transloads with short lines in the U.S. So if CN took ownership of the Pan Am at Auburn, Me., it could start building transloads that would feed its own network.

“Then there’s Canadian Pacific, which is just finishing up its acquisition of the Central Maine & Quebec, so maybe its hands are full. On the other hand, CP does have a direct current connection with Pan Am in Mechanicsville, N.Y. Maybe it would step into NS’s shoes and pick up the Pan Am Southern.”

Add It All Up

“The other thing is that if you look at the Pan Am map, you could sell the Connecticut River line and some other select pieces to Vermont Rail. You could sell another piece to CP or Genesee & Wyoming or whomever; you sell the other piece to CSX and so on down the line. That’s another possibility. Also, it’s a 428-mile railroad from Mattawamkeag, Me., all the way to Mechanicville, N.Y.. Does anybody want that whole piece of railroad?”

“Let’s look at the debt in terms of money borrowed to do something with,” our source said. “What’s going on here, as you read about it, is the federal government bailing out companies to try to keep this country alive, going through the COVID-19 pandemic.

“What happens is that the government is looking to create liquidity in these companies and maybe falling short of cash. Well, if you lend somebody money to create liquidity you also create a debt obligation. The question is, do you want somebody with debt, and all of a sudden the cash flow isn’t enough to support the debt, and you run into a solvency problem?

“Let’s suppose that 25 people get in line for Pan-Am. And let’s suppose that Pan Am—and this is a guess—goes for $1 billion. And these potential buyers have 60%, 70%, 80% debt. What happens if, over time, Pan Am doesn’t turn out to be what they thought it was and they run into a cash flow crunch and they can’t get liquid—they become insolvent. What happens after that?

“That is a function of the current financial environment. But you have to make sure you can cover your company, and you line up somebody with debt and all of a sudden cash flow goes south, it becomes what the financial press is calling a potential zombie company. And it’s happening in the railroad industry right now.

“There’s a way of calculating a company’s solvency ratio—basically cash flow as a percentage of debt. A general rule of thumb is if you have cash flow equal to 20% or more of debt, you’re going to be OK. If cash flow falls below that, you could be in trouble.

“So, in addition to trying to connect the dots and play with the math, you want to start asking who’s out there that could buy Pan Am without a lot of debt.”