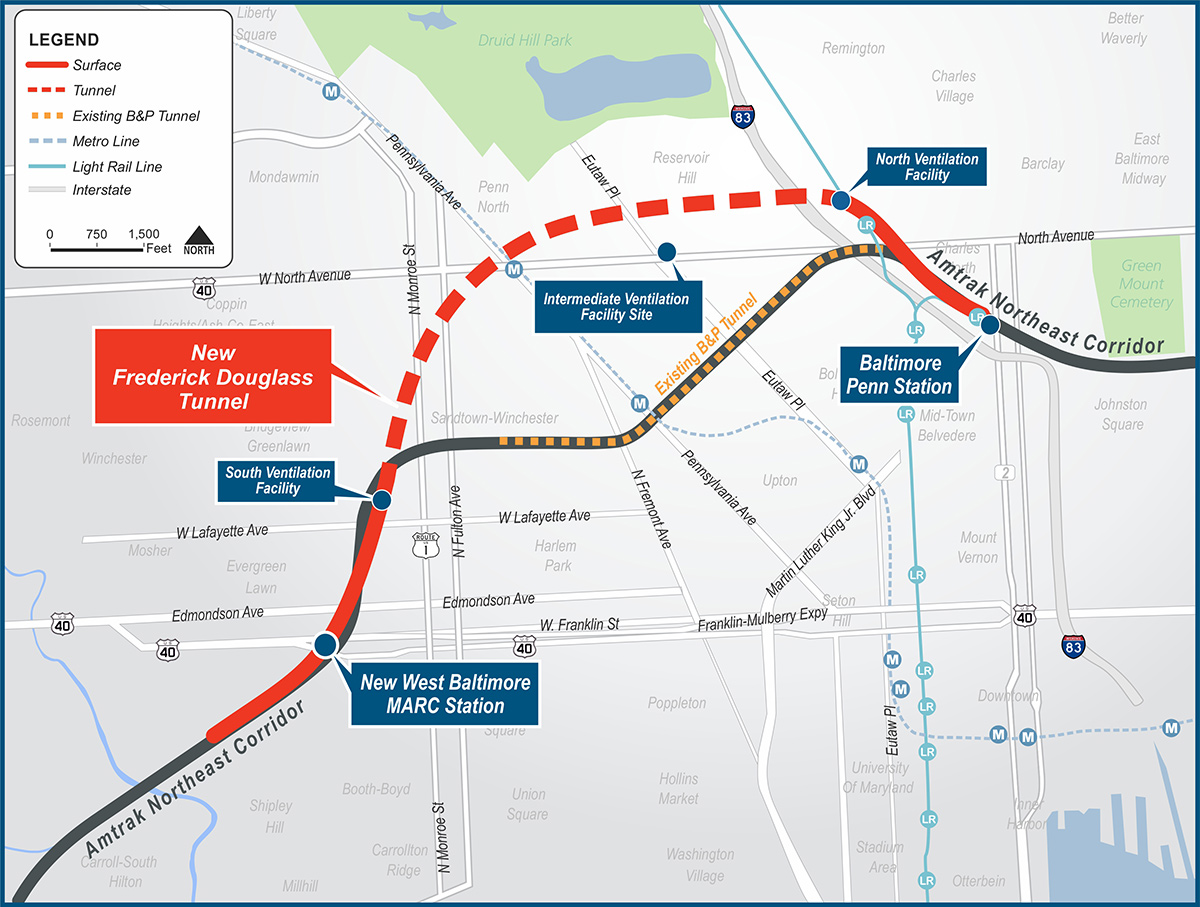 Amtrak and the Maryland DOT will work together to replace a critical rail tunnel in West Baltimore.

One of the nation’s worst passenger rail bottlenecks will be uncorked in the coming years.

On June 18, Amtrak and the Maryland Department of Transportation released new plans to replace the 148-year-old Baltimore & Potomac (B&P) Tunnel on the Northeast Corridor in the next 10 years at a cost of $4 billion.

MDOT and Amtrak have agreed on a phased implementation approach for the new Frederick Douglass Tunnel. Two high-capacity tubes will be constructed for electrified passenger rail service. They will accommodate Amtrak trains as well as all MARC Penn Line commuter trains, which Maryland Secretary of Transportation Gregory Slater said will be electrified. The move will eliminate diesel train emissions at a ventilation facility on North Avenue in West Baltimore. Construction of two additional tubes for freight trains will be deferred.

The Frederick Douglass Tunnel is the centerpiece of the B&P Tunnel Replacement Program, which is slated to modernize a four-mile section of the Northeast Corridor; the program also includes the replacement of bridges, track and rail systems, and a new ADA-accessible West Baltimore MARC station.

Amtrak and Maryland DOT will work together to execute the new tunnel project, which currently has no funding source. Amtrak is in the process of finishing the design and purchasing sections of right-of-way.

The existing tunnel is a safety concern and does not meet the demand for freight and passenger rail. The Federal Railroad Administration (FRA) has marked the tunnel structurally deficient. Poor soil has floor slabs sinking, requiring ongoing maintenance. Amtrak spent $71 million in 2020 to build new track in the tunnel. The section is a major bottleneck for Amtrak and MARC commuter trains moving through the Northeast Corridor.

Currently, trains travel at around 30 mph through the two-track, 1.4-mile tunnel; two separate single-track tubes will enable speeds up to 100 mph.

A plan to replace the 148-year-old tunnel was actually approved by the FRA four years ago, but that design called for four single-track tunnels. Revising designs with just two tubes could save up to $1 billion and will take two fewer years to construct.

Amtrak has marked $65 million for the design and pre-construction phase that will be carried out in 2022. Amtrak also is banking on $257 million in federal funding for the work. The project could be in full swing in 2023.

Freight trains will continue to use the old tunnel.

“This is a generational project for passenger rail in the State of Maryland and the entire Northeast Corridor,” MDOT’s Slater said. “MDOT is proud to partner with Amtrak on the new approach, and we are ready to work with Amtrak and the federal government to move a new B&P Tunnel forward.”

Amtrak President Stephen Gardner noted: “In naming this vital piece of new infrastructure on the Northeast Corridor, we want to highlight Frederick Douglass as a critically important figure in American and Maryland history, whose principles and work inspire Amtrak and align with our own values and mission. As Frederick Douglass escaped to freedom by way of a train in Baltimore and traveled extensively by rail, naming this state-of-the-art new passenger rail tunnel after him is a fitting way for us to honor his legacy.”