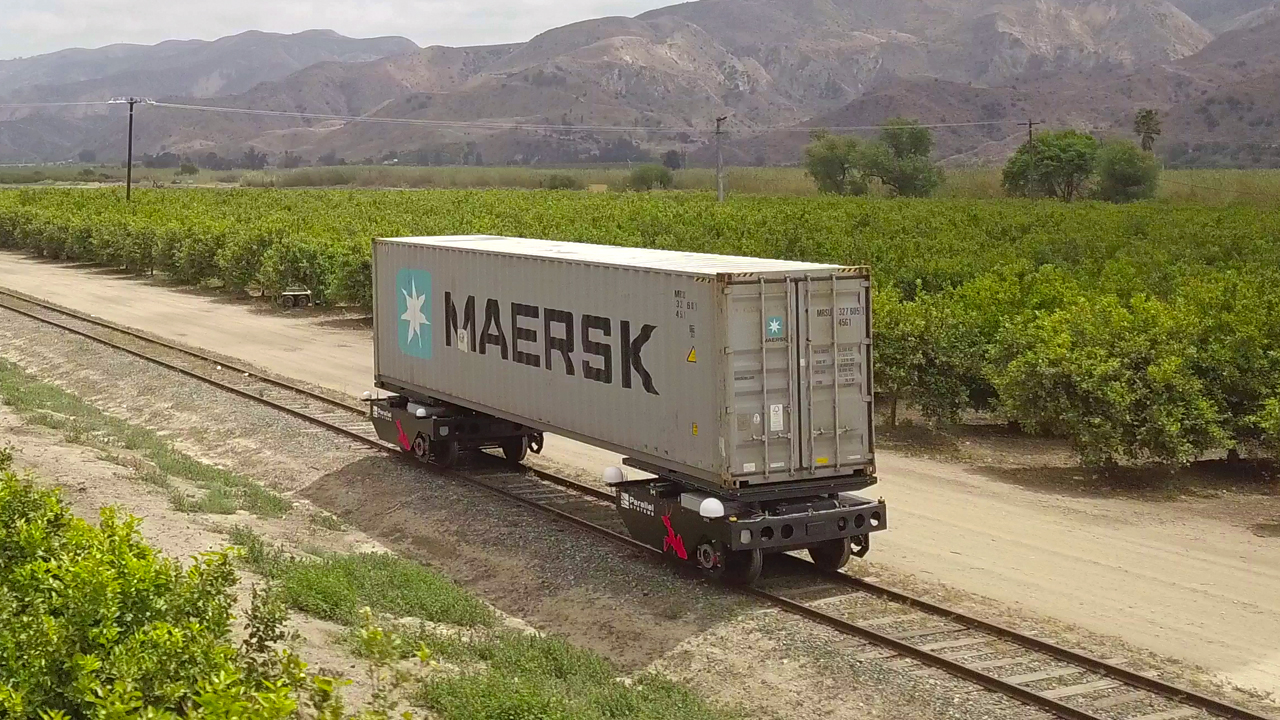 Culver City, Calif.-based Parallel Systems has been awarded a $4.4 million U.S. Department of Energy (DOE) grant to test its autonomous, battery-electric-powered railcar technology. DOE is distributing a total of $175 million to 68 projects through the Advanced Research Projects Agency-Energy (ARPA-E).

The award follows Parallel Systems’s Jan. 19 report that it raised $49.55 million in Series A funds to help build a fleet of new railcars for short-haul freight operations (see specs below), continue testing and grow the company.

Parallel’s patent-pending vehicle is slated to “transport standard shipping containers as a single or double-stacked load,” according to the company. Joined together, the individually powered railcars could form “platoons” (see rendering below) or split off to multiple destinations while en route.

Parallel will use the $4.4 million DOE grant to fund a 29-month advanced testing program, which is slated to begin in second-quarter 2022. The aim of the program: to demonstrate overall vehicle stability, contact-based platooning and energy efficiency, the company said.

DOE’s National Renewable Energy Laboratory (NREL) and the Rail Transportation and Engineering Center (RailTEC) at the University of Illinois will assess the potential energy efficiency and environmental benefits of Parallel’s vehicles. They will be among the first to be evaluated using NREL’s Advanced Locomotive Technology and Rail Infrastructure Optimization System (ALTRIOS) software, according to Parallel, which described ALTRIOS as “an ARPA-E funded tool designed to simulate and optimize energy conversion and storage dynamics, train dynamics, meet-pass planning (detailed train timetabling), and freight-demand-driven train scheduling.”

The vehicles will also be evaluated at the Transportation Technology Center, Inc. (TTCI). TTCI is slated to “collect data around how Parallel vehicles perform on the tracks in various conditions, including dynamic stability in twist and roll, pitch and bounce, and yaw and sway,” Parallel reported. “The tests will benchmark the new vehicle dynamic performance against the requirements of traditional freight rail vehicles. NREL and RailTEC will collaborate to model the vehicles and system performance.”

The other ARPA-E-funded projects—coordinated at universities, national laboratories and private companies—focus on technologies such as fuel cells for light- and heavy-duty vehicles, and technologies “to generate less nuclear waste and reduce the cost of fuel,” according to DOE. Download the complete list below:

“Our mission is to decarbonize freight by building a cleaner, automated rail future,” Parallel Systems Co-Founder and CEO Matt Soule said. “The funds awarded from the Department of Energy will help us achieve our mission by supporting Parallel through our advanced testing phase.”