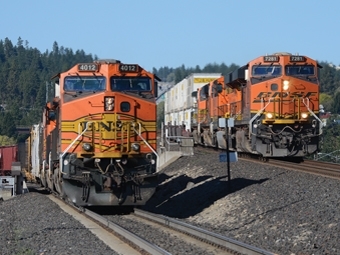 U.S. freight carload traffic remained mired in its own slide for a third week, down 2.1% measured against the comparable week in 2014. But U.S. intermodal volume rose 4%, boosting overall U.S. freight traffic to a 0.8% gain.

Both Canada and Mexico sported robust gains for the week ending March 7, 2015, measured against the comparable week in 2014. Canadian freight carload traffic for the week ending March 7 rose solidly, up 9.2%, while Canadian intermodal volume did even better on a percentage basis, up 14.1%. Mexican freight carload traffic also did well, up 10.8% compared with the same week a year ago, while Mexican intermodal rose 19.6%.