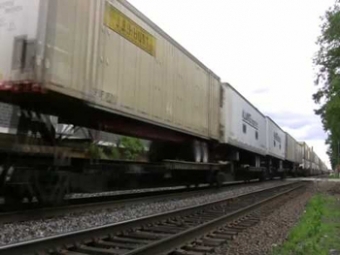 U.S. levels scored a percentage trifecta, with freight carload traffic rising 6.2% for the week measured against the comparable week in 2013, while U.S. intermodal volume also rose 6.2% during the week, resulting in total U.S. rail traffic for the week ending Nov. 29 gaining 6.2%.

Eight of the 10 carload commodity groups AAR tracks on a weekly basis posted increases compared with the same week in 2013, including nonmetallic minerals, up 23.1%, metallic ores and metals, up 16.3%, and forest products, up 8%. Grain was the leading decliner, down 5.7% for the week.

Those figures were reinforced by strong overall U.S. rail freight gains during the month of November. AAR reported U.S. freight carload traffic during November rose 1.4%, “the ninth straight month of year-over-year increases in carloads.” U.S. intermodal traffic for the month gained 2.7% over November 2013 levels, AAR said, adding that the weekly average intermodal volume for the month was 258,764 units, “the highest for any November in history.”

Eleven of the 20 carload commodity categories tracked by the AAR on a monthly basis logged year-over-year increases during November 2014, AAR said.

“It’s not always easy to tell from available indicators how the economy is performing and that is true for rail traffic in November when some traffic categories showed solid growth, others not so much,” said AAR Senior Vice President John T. Gray. “A healthy and efficient freight rail network is vital to delivering America’s changing economy. Today, railroads are moving more traffic than at any time since 2007.”