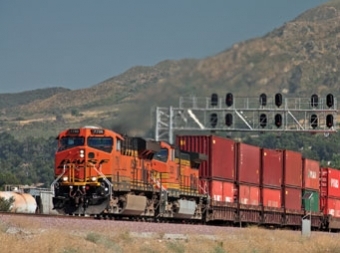 AAR, reporting on activity for the week ending Dec. 6, 2014, said U.S. freight carload traffic was up a hefty 11.7% measured against the comparable week in 2013. U.S. intermodal volume for the week gained 2.1%. Total combined U.S. weekly rail traffic was up 7% compared with the same week last year.

Eight of the 10 carload commodity groups AAR tracks on a weekly basis posted increases compared with the same week in 2013, including grain, up 25.5%, nonmetallic minerals, up 17%, and metallic ores and metals, up 14.8%. Commodity groups posting decreases compared with the same week in 2013 included farm products, excluding grain and food, down a modest 0.2%.

Combined North American freight carload traffic for the first 49 weeks of 2014 on 13 reporting U.S., Canadian, and Mexican railroads was up 3.2% measured against the comparable period in 2013. Combine North American intermodal volume was up 5.3%.