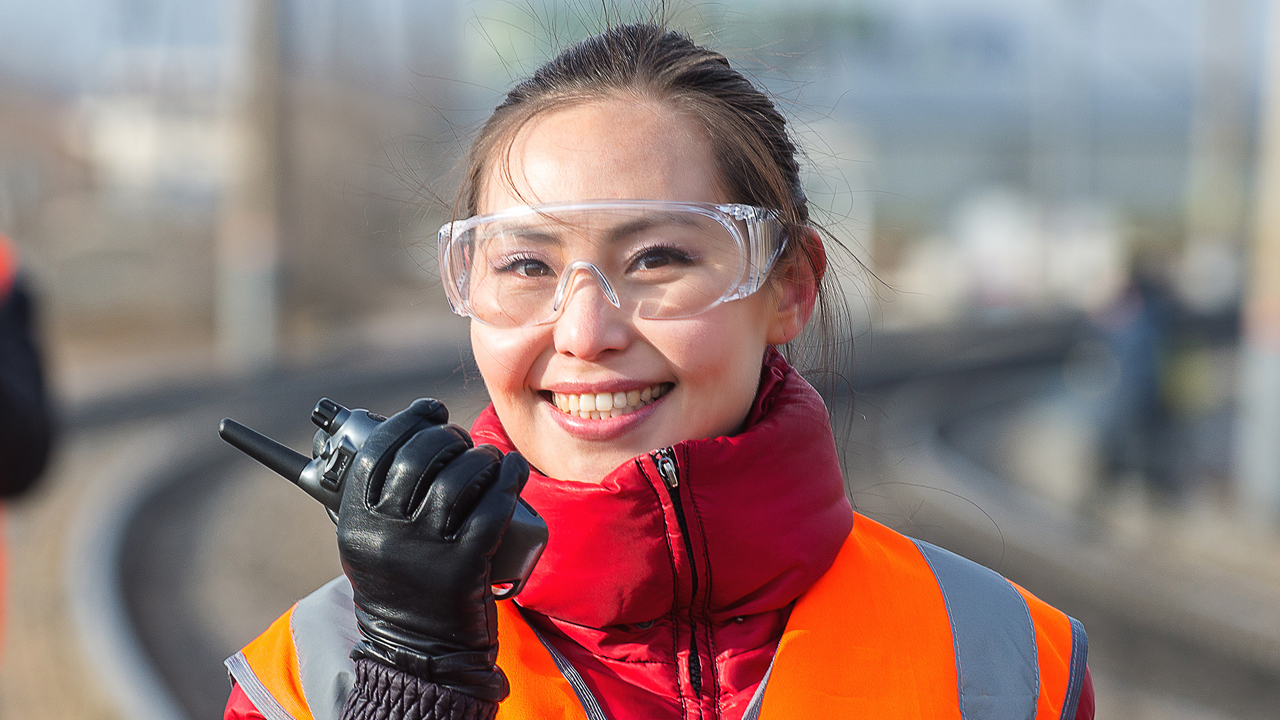 RAILWAY AGE, NOVEMBER 2019 ISSUE: Good things come in threes—and Railway Age’s Women in Rail awards are no exception. In its third year of existence, the 2019 Women in Rail awards are poised to be the most exciting yet. Recognizing vision, ability and leadership, our 12 honorees from freight, transit and supplier companies as well as trade organizations were selected by a panel of judges. They received the nod because they have been—and still are—moving their companies forward while making contributions to the community. In an industry typically dominated by men, these women are getting things done—and their hard work is an example for all.

Wilson, President and CFO of RailUSA, LLC, which acquires and operates North American freight railroads, provides strategic leadership for the business and is responsible for implementing long-range goals, strategies, plans and policies. Prior to joining RailUSA in 2019, Wilson was President of Wells Fargo Rail, the rail equipment operating leasing subsidiary of Wells Fargo Bank, which owns and leases more than 175,000 railcars and 1,400 locomotives. At Wells Fargo Rail, Wilson led growth of that business three times, to the largest lessor in North America, through the acquisition of three industry competitors. She earned a Bachelor of Science in Business Administration from Boston College and an MBA from Babson College.

Gallagher is the founding executive director of the Commuter Rail Coalition, an association that launched earlier this year to bring focus on the legislative and policy needs of the nation’s commuter railroads. A public transportation policy professional and strategic advisor, she most recently served as a member of the NY Metropolitan Transportation Authority’s leadership team. She joined the MTA after 16 years at the American Public Transportation Association. She has represented the U.S. on industry panels throughout Europe and Asia, led study missions to six countries and hosted industry delegations from around the world.

Adamiak’s contributions started early on in her career at KCS. In her role in Investor Relations, Adamiak remained in constant contact with KCS executives and the shareholder community to ensure investors were well-versed in KCS. In her 13 years and six positions at KCS, she’s left her mark not only inside KCS, but also with customers, partners and the industry as a whole. In her current role, she’s leading a development project designed to help customers capitalize on the benefits of locating in the Dallas area. Adamiak has a long-standing commitment to serving community youth organizations as a leader, mentor and active participant in advancing opportunities for young people, among them the Kansas City Urban Youth Academy (KCUYA).

A 20-year industry vet, Caruso is key to the inter-association relationships with REMSA, RSSI and RSI that have resulted in successful Railway Interchange trade shows in conjunction with the AREMA and Mechanical Associations annual conferences. Under her direction, AREMA has expanded threefold the number of student chapters at colleges and universities, introducing hundreds of young professionals to the rail transportation industry.

Since joining Virgin Trains USA Florida LLC, Gatchell has been instrumental in providing organization structure in the Risk Management arena as well as legal assistance in a company that is, quite literally, a “startup.” In so doing, she has helped to create the structure of a brand new railroad, something which North America has not seen in many decades. Gatchell has spent 14 years in the railway industry.

Grasso commenced her railroad career in 2016 as a manager in the real estate department. In her current role of Strategic Operations Principle, she has developed a comprehensive five-year Strategic Operating Plan for all business lines; built robust KPI metrics into C-Team and board-level reporting; and developed targeted action plans to increase operational effectiveness against KPIs, including efforts to reduce employee turnover and safety incidents.

Green is responsible for all rail vehicle and systems engineering projects and staff in the region. She’s also responsible for oversight of LTK’s national provision of expert consulting support on procurement of rail vehicles and systems, engineering cost estimates in support of procurements or change orders, and the performance of FTA Buy America Audits on-site at all major railcar manufacturers. Her experience combines both engineering and business.

Impastato, who holds a B.S. and M.Sc. from the University of Oxford and a B.S. from UPenn, has served in many capacities to improve the safety of railroading. She was the lead for the team at Amtrak which developed and submitted the first SSPP to the FRA, in advance of regulatory requirements. She has served as an industry leader in the RSAC, APTA and TRB. Impastato has 20 years in the industry.

Kreger has been a key part of the BNSF Economic Development Strategic Program, including launching BNSF’s Certified Sites program, and a leader with BNSF Logistics Centers. She leads by example and has been promoted from working on rail projects with JLL for BNSF, to working directly with BNSF as a Manager and now Manager of Business Units Planning and Analysis. Her followup and ability to get things done is known throughout the organization.

Remillard’s knowledge and passion for her work in the rail industry is evident by her swift promotion through roles at Canadian Pacific. Each time she accepts a new challenge, she is quick to execute strategies and produce results, which is acknowledged by her being presented with more opportunities to help grow the business. Team building and management is an expertise of Remillard’s and something she has been championing for more than 25 years.

Scagnelli has been through the early years of Conrail’s creation in the ’70s and navigated through the acquisition of Conrail. She was one of the first full-time environmental lawyers in the industry as regulatory and other legal authorities began clamping down on the industry in the late ’80s and early ’90s. Scagnelli was a key member of the AAR’s Environmental Lawyers Working Group for many years. She personally handles numerous legal matters without outsourcing.

Smith led the planning and environmental work for two major BART extensions that have been built and are operating, and for one major maintenance facility. She’s very involved in the Women’s Transportation Seminar (WTS) and mentors younger women entering the rail transit field. In a complex political environment, Smith—who has 35 years in the industry—is successful at moving her projects forward.

At both NS and G&W, Thompson, with 17 years in the industry, has continuously ensured that customers recognize value in rail transportation. In addition to overseeing all sales and marketing activities for G&W’s 29 Southern Region railroads, she and her team have added 24 new accounts in 2019 alone and have progressed $60 million worth of new projects in G&W’s three-year industrial development pipeline.

Ouellet’s 24-year rail career has been diversified both in terms of the positions she has held as well as the knowledge she has gained through international assignments on several continents. She’s played key roles in the functions of Quality Assurance, Continuous Improvement, Project Management, Procurement & Supply Chain as well as Bids. She has lived in Asia, Europe, North America and most recently in Australia for three years during which she led complex rail-related Public-Private Partnership bids for Bombardier dealing with international partners.

Bolton has enjoyed a 29-year career working primarily as a Labor Relations professional. She began her career at “Big Conrail” in Philadelphia, but soon found herself practicing her profession in several of Conrail’s field offices. Her guidance in collective bargaining agreement matters assisted supervision in seamlessly accomplishing various safety and operational goals. In 1998, as part of the Conrail acquisition, she accepted a position with Norfolk Southern’s Labor Relations Department where she was a key team member in the Conrail employee integration process. During her time at NS she worked with members of the Yardmasters and various Shop Craft representatives to achieve single agreements for those crafts. Bolton returned to Conrail, now Conrail Shared Assets, in 2013.

Albiston is the primary point of contact between CP and the financial community. She is responsible for the strategic management of CP’s investor relations program, in addition to overseeing its $13 billion pension portfolio. Having joined the company in 2005 as a Capital Markets Analyst in the Treasury Department, Albiston has held successively more responsible roles within the organization. She joined the investor relations department in 2011 and has communicated corporate strategy through significant management change and implementation of CP’s growth strategy.

Most of Moghaddam’s contribution to the industry has come in the form of mentorship, career guidance and recruitment of young engineers—especially women—to join the industry as professionals, entry level or otherwise. As an employee of RailWorks, she attended several career fairs at her alma mater, University of Illinois (Urbana-Champaign), and recruited young engineers. She has also successfully recruited professionals for offices outside of the U.S. who were not previously in the rail industry. Moghaddam’s career both in Iran and here in the U.S. has provided her with a unique understanding about the challenges of the rail industry.