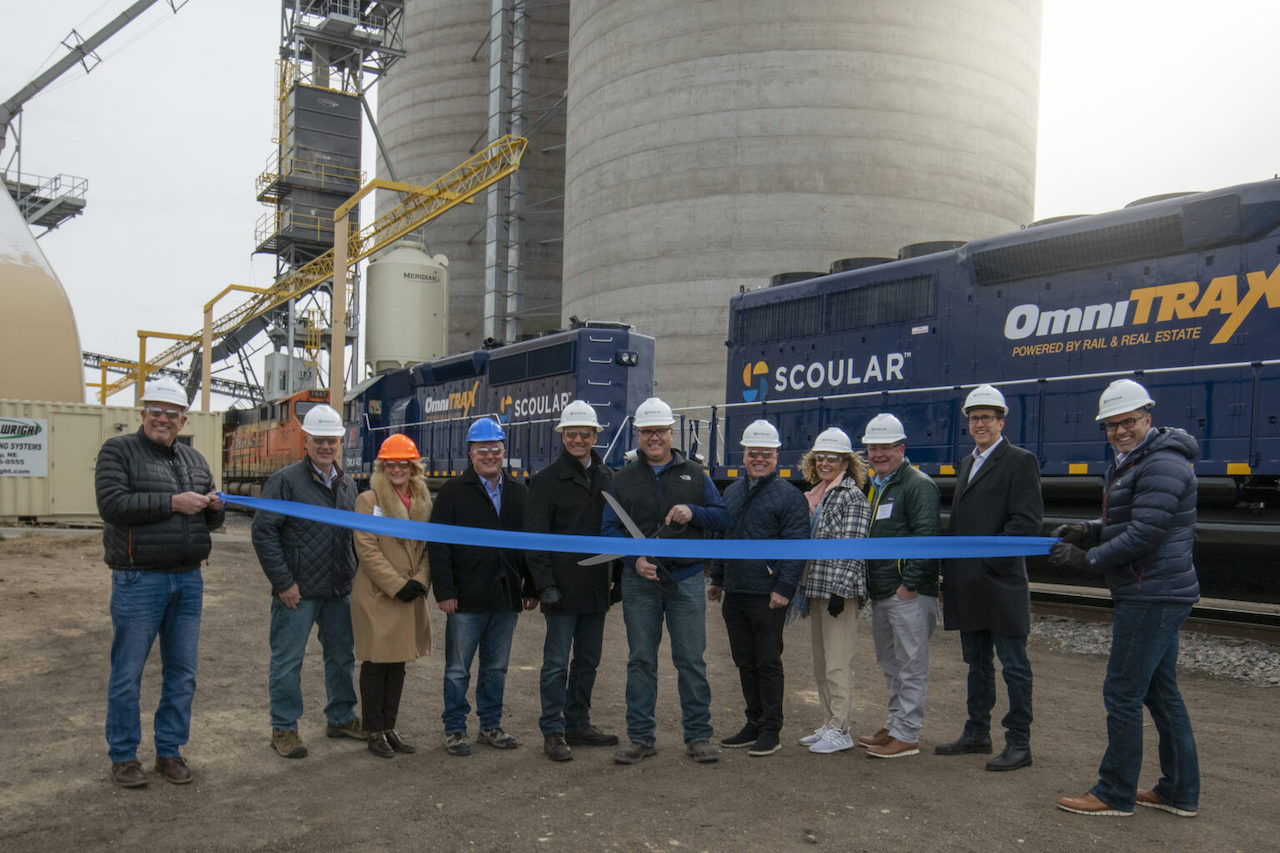 Scoular leaders, along with officials from BNSF and OmniTRAX, celebrated the completion of the new Grainton facility on Nov. 17.

Scoular, an employee-owned agribusiness, on Nov. 17 celebrated the completion of its new Grainton, Neb.-based high-speed shuttle loading facility, which will allow producers in southwest Nebraska to “have new markets for their grain, plus significantly faster unloading speeds and increased storage.”

The facility, which was celebrated by a ribbon-cutting event attended by Scoular CEO Paul Maas, plus other Scoular leaders and railroad representatives, is only the fourth of its kind in southwest Nebraska, including Scoular’s facility in nearby Venango. According to Scoular, the new Grainton shuttle loader provides high-speed loading and unloading capabilities and has track capacity for 110 cars. Additionally, the facility has the capability to receive farmer grain at a rate of 45,000 bushels per hour, even while loading out railcars at 60,000 bushels per hour—five times the loadout volume than before the upgrade, the company said in a release.

Previously, Scoular’s Grainton facility consisted of a standard elevator with track space for 25 cars that, along with truck transportation, provided farmers access to markets primarily in southwest Nebraska and Colorado.

According to Scoular, the vision for the new Grainton facility began with Regional Manager Ty Knispel and his “desire to put the Perkins County, Nebraska, farmer production onto the 110-car BNSF network and supply the world with high-quality produced grains.”

At the new facility, the Nebraska, Kansas, & Colorado Railway (NKCR), an affiliate of the OmniTRAX rail network, provides access to the BNSF mainline, opening farmers to markets in such places as Mexico and Texas. Officials with BNSF and OmniTRAX, the Colorado-based parent company of the NKCR, joined Scoular leaders at the ribbon-cutting ceremony.

According to Scoular, upgrades to the facility included:

“Our company thrives on helping farmers and customers succeed, and this facility is a great example of our service to them,” said Scoular Senior Vice President and Grain Division Manager Ron Bingham. “With these upgrades, farmers will get in and out quickly, and we know how important that is for them.”

The upgrades, Scoular says, follow major improvements completed this summer at Scoular facilities in Pratt and Coolidge in Kansas, and in Adrian, Miss. Those facilities and Grainton are part of Scoular’s Midwestern grain handling network that includes more than 50 facilities in Missouri, Iowa, Illinois, Kansas, Colorado and Nebraska.