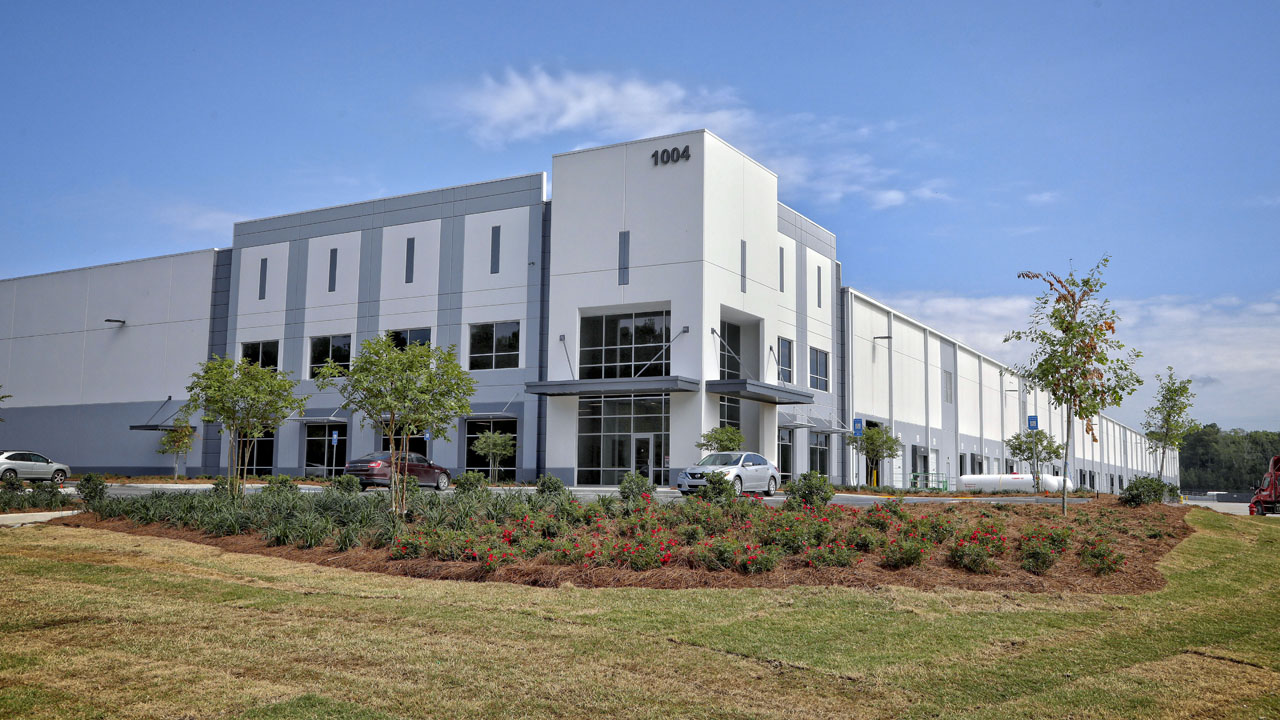 All photos via The Wilbert Group.

Stonemont Financial Group announced that construction has officially finished on phase one of the Georgia International Trade Center (GITC) in Effingham County, Ga., near Savannah.

The milestone caps a 12-month period that saw nearly 2.5 million square feet of new warehouse development, fueled by a large build-to-suit for Shaw Flooring and several third-party logistics (3PL) providers that moved to the park, helping to accelerate plans for the next round of construction on the project’s second phase.

Stonemont also announced that it has finalized the sale of a 154,650-square-foot spec warehouse to De Well Group, a global freight-forwarding company based out of Los Angeles. The transaction marks De Well’s entrance to the Savannah market, which will serve as the firm’s Eastern U.S. headquarters. Other tenants who have recently signed leases at GITC include Sunland Logistics Solutions (150,000 square feet), a 3PL provider headquartered in Greenville, S.C., and Dukal Corporation (operated by Geodis) (270,000 square feet), a global supplier of medical disposable products and patient care items for the healthcare market.

GITC is Savannah’s newest rail-served industrial park, located less than 10 miles from Georgia Port Authority’s (GPA) Garden City Terminal. The site can accommodate up to 7.2 million square feet of industrial development buildings ranging in size from 155,000 to 1,265,000 square feet, and includes CSX rail service with direct access to the port. According to the GPA, Savannah has a 21% market share on the East Coast and is now the nation’s third largest port behind only New York and Los Angeles-Long Beach.

Also, earlier this month, GPA announced that it had achieved a significant milestone in the ongoing Mason Mega Rail project, which aims to double GPA’s existing rail capacity and increase the port’s reach to major markets in the Midwest and Southeast. Nine of 18 working tracks have now started operations, with two rail-mounted gantry cranes to be commissioned later in June. Once complete, the Mason Mega Rail Terminal will be able to handle approximately 2 million 20-foot equivalent units (TEUs), creating new opportunities for industrial developers and investors.

Shaw Industries Group, Inc. was the first tenant to lease space at the GITC, moving into a 778,050-square-foot warehouse on the property in November 2019 and another 291,000 square feet at an adjacent building last month. According to CoStar, the 1.06-million-square-foot deal was the second largest industrial lease signed in Georgia in 2019.

Stonemont and its development partner, Chesterfield LLC, took a risk in pursuing the Shaw transaction, as they knew it could be a catalyst for GITC. Before securing the contract with Shaw, the firms chose to start over $3 million of site preparation work that was needed to meet the November delivery date mandated in Shaw’s RFP. General contractor Omega Construction worked on a handshake deal with Stonemont and Chesterfield, making a gamble that the project team would ultimately win the bid with Shaw.

The next phase of construction calls for three buildings of 1.15 million square feet, 416,000 square feet, and 250,000 square feet, respectively. Stonemont has invested more than $150 million to date and is developing the project in conjunction with Chesterfield and The Davis Companies.

“The phenomenal pace of absorption we’ve seen in the first phase alone demonstrates a clear and healthy level of demand from 3PL providers and other logistics firms that will continue to accelerate moving forward,” said Zack Markwell, Managing Principal and CEO, Stonemont Financial Group. “The market intelligence and data we were able to glean from our initial build-to-suit engagement with Shaw Flooring played an integral role in the successful development of the speculative buildings that immediately followed and were quickly leased up or sold.”

“GITC offers the opportunity for Sunland to grow and create a multi-location effect in the same business park. This position is helpful to our long-term growth strategy as a company,” said Elijah Ray, Chief Customer Officer at Sunland Logistics Solutions. “Stonemont seemed to sense Sunland’s growth potential and demonstrated a strong desire to work with us. They were detailed in their approach to sharing the property specifications while also giving us a glimpse into the future of the park and how we might fit given our strategy.”

“This is one of those war stories we’ll talk about forever,” said David Burch, Principal with Stonemont. “Obviously it was a big risk, but we knew how much that first build-to-suit could mean for the future of the park, so we took it.”