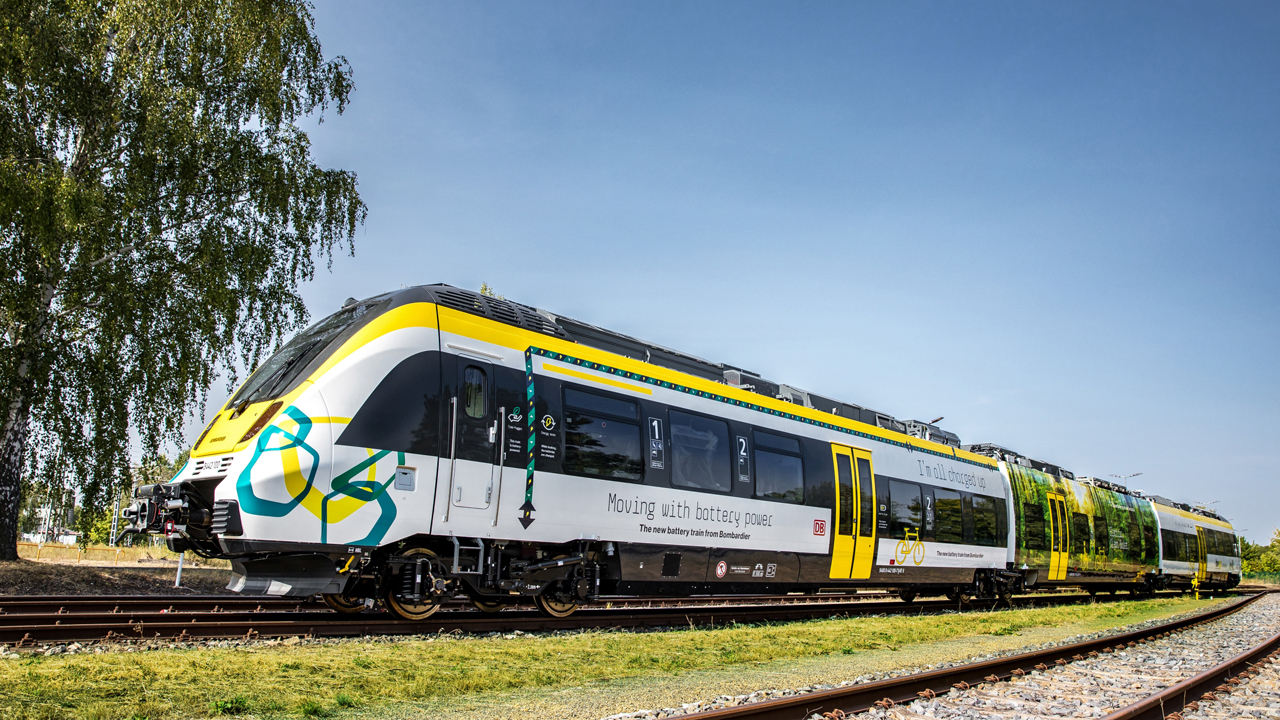 Bombardier’s Talent 3 electric-hybrid train in Berlin is the first of its kind in Europe in more than 60 years.

Even dedicated environmentalists have trouble “doing the right thing” when it comes to traveling by today’s railways. In December 2019, activist Greta Thunberg was headed from Lisbon to Madrid to speak at a United Nations conference dealing with climate change, when she ruled out a flight due to its impact and instead opted to journey by rail. But the lack of fully electrified rails between Vilar Formoso, Portugal and Salamanca, Spain still required a heavily polluting diesel locomotive for more than an hour of her journey.

Electric has long been hailed as the future of rail transportation. Now, with lithium-ion (Li-ion) battery solutions available to replace diesel engines or co-exist in hybrid diesel or electrified locomotives, that future is a bit closer. Working together with diesel engines, batteries provide a pathway toward less-polluting trains and operation in areas where diesels are prohibited. For electric locomotives, add-on battery packs can help them to traverse non-electric portions of the right-of-way and to operate seamlessly during power failures.

Electrification: A Tale of Two Continents

Rail electrification in the U.S. began at the turn of the 20th century and reached its peak in the 1930s at 3,100 miles, much of it by the Pennsylvania Railroad (PRR). By 1973, the effects of de-electrification settled in with the number of electrified route-miles dropping to 1,778 to today’s estimate of about 1.0%. The picture is quite the opposite in the European Union, where more than 53% of the continent’s railways are electrified, amounting to more than 71,450 route-miles.

This disparity is largely because European governments own and operate the railways and can prioritize the costs of transmission infrastructure. In the U.S., where private railway companies own and operate most systems, they would have to finance electrification themselves. That, together with the lower initial cost of purchasing diesel locomotives, stands as a major deterrent to electrification.

One exception is the Washington D.C.-Philadelphia-New York-Boston Northeast Corridor (NEC), much of which is the successor to the PRR’s massive Washington D.C.-New York electrification project of the 1930s and that of the New York, New Haven & Hartford between New York and New Haven, Conn. Electrification was extended to Boston about 20 years ago. The NEC combines Amtrak operations with those of several commuter railways. The U.S. Department of Transportation owns most of the right-of-way; Amtrak manages, dispatches and maintains it, and also invests expansion capital—all of it with a combination of state and federal subsidies.

Enter the Li-ion battery. This technology, whose creators—John B. Goodenough, M. Stanley Whittingham and Akira Yoshino—won the 2019 Nobel Prize in Chemistry, is ubiquitous in our smart phones and laptops, and presents a solution for cleaner rail transport. Aside from emitting zero NOx, battery-powered locomotives are 50% quieter than diesel. They can run reliably on non-electrified parts of a network, or portions that are prone to power outages. In fact, using today’s technology, a battery-operated locomotive can travel 87 miles in catenary-free mode. Battery-powered trains also offer more flexibility as diesel hybrids.

A locomotive equipped with state-of-the-art battery packs eliminates the need to build and maintain new electrification infrastructure. Batteries can be recharged at dedicated charging stations, when the train is braking or operating on sections of electrified rail. The battery packs are long-lasting and versatile. Even with daily operation, they have a lifespan of five to eight years, can charge in seven to ten minutes and can power any type of commuter or regional train.

What about the comparative costs of using batteries vs. various other energy alternatives? That’s what The Norwegian Railway Directorate set out to learn in 2019 prior to selecting an approach for converting the country’s five remaining non-electrified railways from diesel power to zero-emission technology. The government agency commissioned a study to review the use of hydrogen, biogas, biodiesel and battery-powered locomotives to learn which alternative energy solution would represent the most efficient use of public funds and achieve its environmental objectives.

The study found that partial electrification combined with traction batteries would be the preferred solution for non-electrified rights-of-way. From an operating expense standpoint for railcars on its Nordland line, after taking into account cost per passenger and per mile, the partial electrification/battery solution would cost half that of diesel and less than 60% compared to hydrogen. The solution would help Norway accelerate reduction of the 30% of greenhouse gas emissions produced by transport sector while helping the country reach its overall national target of cutting emissions 45% by 2030.

Locomotive batteries can recharge at stations, on sections of electrified track and through regenerative braking. The batteries power a convertor that provides energy to the traction motors. Leclanché is actively developing a proprietary battery management system that communicates with the locomotive and provides real-time updates on charging status, temperature, battery health and other parameters. The system will also allow thermal control of battery cell temperature with an integrated cooling system. Both Leclanché’s G-NMC and LTO batteries have a benchmark life-cycle that satisfies railways’ long-life-span requirements.

Europe appears to be taking the lead with respect to implementing battery-powered trains. Bombardier launched its Talent 3 electric-hybrid train in Berlin, the first of its kind in Europe in more than 60 years. Alstom will launch its first battery-electric Coradia Continental multiple-unit (MU) trainsets covering the Leipzig to Chemnitz line in Germany in 2023. Irish carrier Larnród Éireann put out an RFP in May 2019 to purchase 600 new trainsets by 2040, all electric and up to half battery-powered.

Perhaps in a few years’ time, or even as soon as Thunberg’s next sojourn to a future climate summit, there will be more battery-powered trains bridging the gaps in European infrastructure, and even some quietly crossing the U.S.

Gerardo Gimeno is Vice President Sales, Commercial Vehicles, for Switzerland-headquartered Leclanché. In 2019, the company announced its selection by Bombardier Transportation as its preferred global provider of battery systems to power rail transportation for about 10 different railway projects.