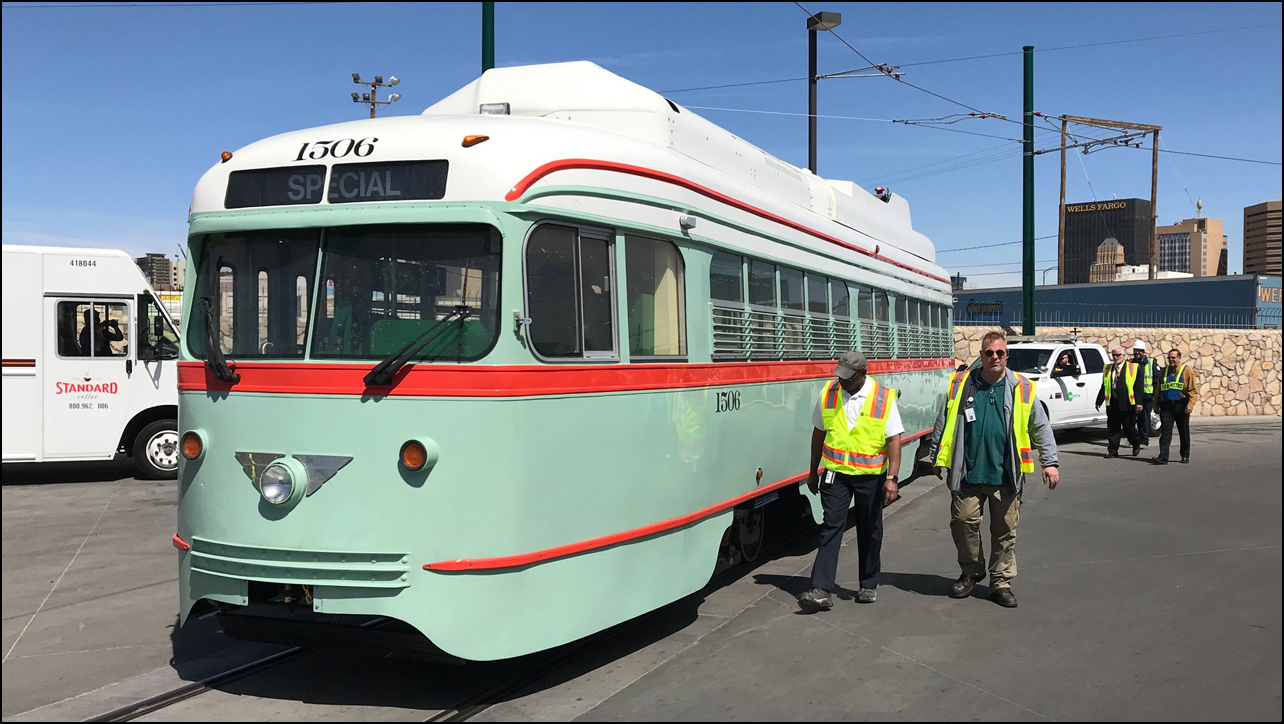 A recent delivery from Brookville Equipment Corp. made the transit experience in El Paso a little older – but a lot newer.

The first of six Presidents’ Conference Committee (PCC) streetcars dating to 1937 were returned to the west Texas city on March 19, following a detailed restoration and modernization program at Brookville Equipment Corporation’s manufacturing facility in Pennsylvania. They will be operated by the El Paso’s Mass Transit Department, known as Sun Metro.

The streetcars were removed from service in 1974 and kept in outdoor storage for decades before the Camino Real Regional Mobility Authority (CRRMA) and Brookville agreed in 2015 to restore the vehicles to new condition. The overhaul included repairing and replacing structural carbody components, new propulsion systems, complete rewiring, new interiors, and door system upgrades. The project also included the integration of key modern features and amenities, including HVAC systems, pantographs, and mobility device lifting system, among others.

The first vehicle is painted in a light blue, red, and white color scheme, identical to the one used for the El Paso fleet from the late Sixties through 1974. Other vehicles in the order will include finishes from El Paso’s fleet during the Fifties (green, orange and white) and Sixties (blue, green and white). Each of the three color schemes will be applied to two of the six vehicles.

The delivery marks the completion of Brookville’s 43rd PCC streetcar restoration, including 18 vehicles for the Southeastern Pennsylvania Transportation Authority (SEPTA) in Philadelphia and a 24 for San Francisco Municipal Transportation Agency (SFMTA). In addition to the five remaining vehicles for El Paso, Brookville is currently working through a progressive rebuild with SFMTA and has delivered eight of 16 total units to San Francisco. At the completion of the two orders, Brookville will have made contributions to a total of 56 PCC streetcars and a total of 88 heritage streetcars, inclusive of propulsion systems and trucks provided for 31 Perley A. Thomas red cars for New Orleans Regional Transit Authority and the restoration of SFTMA’s Streetcar No. 1.

Deliveries of the five additional El Paso streetcar vehicles will continue throughout 2018. The vehicles will undergo on-site testing prior to entering revenue service. The CRRMA is overseeing construction of the El Paso Streetcar Project, including system infrastructure and restoration of the six PCC vehicles.