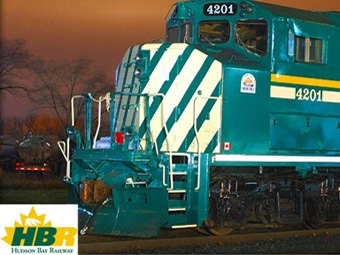 OmniTRAX Canada said Monday, Aug. 18, 2014 it would "suspend its plans to ship crude oil for the foreseeable future," even as it "anticipates a record shipping season in 2014."

Winnipeg, Manitoba-based OmniTRAX Canada said grain and other commodities would fill in any revenue gap caused by the suspension of CBR moves, “due to new customers and contracts to ship grain, commodities, building and construction materials to Nunavut, and with the strong support of the federal and provincial governments” within Canada.

Hudson Bay Railway (HBR) would be the railroad most affected by OmniTRAX Canada’s decsion. HBR links The Pas, Thompson and Churchill, Manitoba, as well as many remote communities, over right-of-way the Port of Churchill and OmniTRAX purchased from CN in 1997.

“OmniTRAX’s vision has always been to run a viable business that meets the needs of northern Manitoba and indeed northern Canada,” said OmniTRAX Canada President Merv Tweed. “Our decision to suspend crude by rail was based in part that grain shippers were willing to commit long-term orders in contracts of over 700,000 metric tonnes due to the market’s overall growth. Following last year’s record crop, we’re preparing for another strong shipping season.”

Tweed added that consultations with First Nations, Metis, and the provincial government were also important factors in the company’s decision to suspend CBR moves. Omnitrax said it will continue to diversify the commodities it currently handles through the Porf of Churchill, located on Hudson Bay, including potash, feed, and wood pellets, to ensure the port’s long-term sustainability.

“After reviewing our current business operations, we are also developing a long-term sustainability strategy that will make policy recommendations to the provincial and federal Governments, as well as identifying critical infrastructure investments required to continue the development of the Northern Gateway trade corridor,” said Tweed.