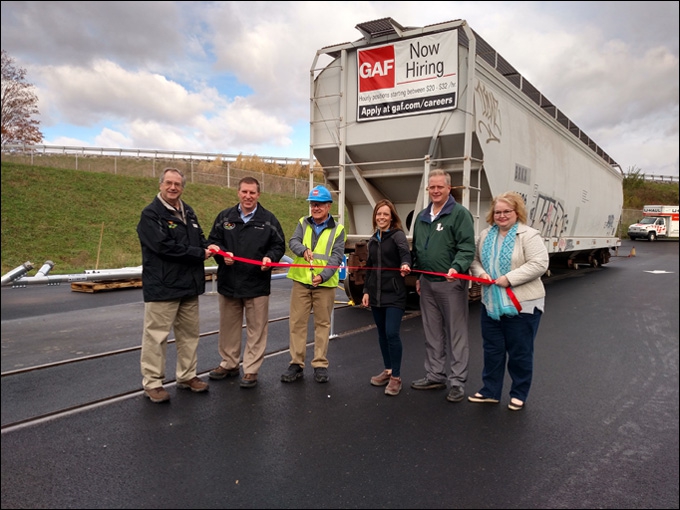 New Columbia, Penn., was the site of a celebration for the Union County Industrial Railroad and GAF Materials Corp., as the latter hosted an inaugural railcar ribbon cutting at its new roofing materials facility along the West Branch of the Susquehanna River.

Union County Industrial is an affiliate of the North Shore Railroad Co., Railway Age’s 2017 Short Line Railroad of the Year. Formed in 1995, the 18.2-mile short line interchanges with Norfolk Southern in Northumberland and Canadian Pacific Railway in Sunbury.

Kantz and UCIR Chief Marketing Officer Todd Hunter first met GAF’s North East Rail Manager at a rail conference in Rhode Island in October 2015. “We just happened to share a lunch and after that, many emails, phone calls, and site visits ensued,” Hunter said. “We are happy to have GAF here in our area and look forward to serving them as one of our many valued customers.”

Headquartered in Parsippany, N.J., GAF purchased the former New Columbia Joist plant in 2016 and began renovations. When completed, the facility will manufacture two different roofing products utilizing automation throughout its production facilities. Twenty-six employees have already been hired – 23 locally – and the company is looking to hire an additional 26 employees over the next couple months, with a starting rate of $21 per hour.

Gregory said the company had looked at five other sites before settling on New Columbia, and Bryson spoke of the importance of having that type of building in the for-sale inventory in the area, to attract new businesses. “With all of these critical location requirements, we are thrilled and appreciative that GAF has chosen our region for its investment and future,” said Bryson. “Most importantly we appreciate GAF bringing quality careers opportunities for families of Central Pennsylvania.”

Kantz added that GAF will bring in 30 to 40 contractors every month as they become certified installers of its TPO roofing system, meaning more money spent at area hotels, restaurants, and other businesses.

“My guess is that once they see the beauty of this area and the attractions, some of them will return with their families for vacation.”