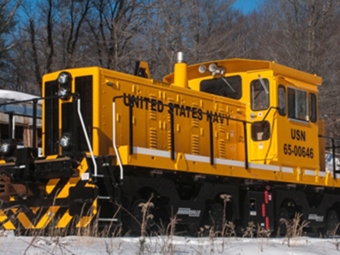 The BL05 locomotive, which began its journey to the facility on March 2, 2015, “will operate at speeds of up to 10 mph while performing heavy freight car haulage applications at the naval facility,” Brookville said. The locomotive was still en route to its final destination as of Monday, March 9, a Brookville spokesman told Railway Age.

“The switcher’s unique drive system is similar to diesel equipment that Brookville designs and produces for underground mining applications – but on a much larger scale,” said Brookville Director of Sales Chris Rhoades. “Diesel-hydraulic drive systems are well suited for low speed applications. Brookville’ss extensive familiarity with manufacturing diesel-hydraulic locomotives and knowledge base in engineering this type of power arrangement provides cost-effective and dependable transportation solutions for customers.”