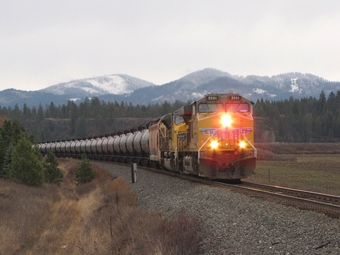 Unit crude-by-rail (CBR) service via the Can-Am represents a major increase in the level of crude traffic that UP and partner Canadian Pacific Railway already move over this route. Since mid-2013, sporadic blocks of crude, ranging from half a dozen cars to upwards of 50 cars per trip, have come south from Canada in UP manifests interchanged from CP. By November of last year, Canadian crude accounted for much of the CBR railed into California, but that business was soon challenged by North Dakota Bakken crude that is either shipped directly to California by rail or transferred through rail-to-barge terminals in the Pacific Northwest, which then forward that crude south along coastal waterways. In fact, during the first half of 2014, rail-to-barge service through the PNW reportedly brought more Bakken crude to California than direct rail service did.

How many California facilities will ultimately benefit from this new CP-UP unit crude corridor is not yet known. One source indicates there could be an average of one trainload of crude per day coming south out of Canada. UP spokesman Aaron Hunt declined to provide figures for expected train volumes, but he did confirm that UP unit trains carrying Canadian crude will now routinely travel through Idaho, Washington, and Oregon to reach California. He tells Railway Age, “We expect to run crude trains on this route moving forward.”