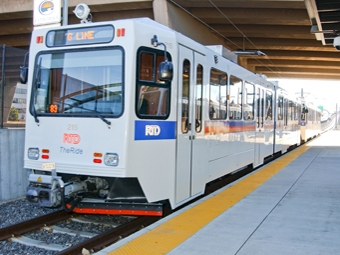 Want proof that American cities away from the coastlines can commit to passenger rail and an auto-alternatives future? Look to Denver. Denver's Regional Transportation District (RTD) may be guilty of modesty.

RTD may claim, justifiably, that its FasTracks program has moved with namesake alacrity to deliver rail—mostly light rail transit—to serve Colorado’s state capital in slightly more than a decade’s time.

Often unheralded is the scope of the program, offering ongoing construction and implementation over an entire metropolitan area since voters approved a $4.7 billion debt package in 2004 eyeing installation of 122 miles of passenger rail right-of-way.

But five FasTracks projects, including the high-profile rail route linking Denver Union Station with Denver International Airport, are scheduled to open this year, bringing massive expansion to RTD’s regional reach, which began modestly in 1972 by employing and organizing bus operations.

RTD began operating its first rail service in 1994 with the debut of its 5.3-mile Central Corridor light rail line, now the spine of a much-larger LRT system.

RTD’s six LRT lines, identified by letter, are credited by many with generating transit-oriented development (TOD) not only in Denver but in the city’s numerous suburban sisters. TOD has become a hot issue for many suburbs whose LRT station park-and-ride facilities have become saturated due to high demand.

Last November RTD welcomed its first Hyundai-Rotem electric multiple-unit (EMU) consist of four cars, the first of 66 cars to eventually be deployed on four lines, three of which are set to open in 2016.

Of the new lines, the 22.8-mile East Rail Line probably has the highest profile, linking Union Station to Denver International Airport with proposed 15-minute frequencies. Five additional midpoint stations will be included on the line. The first 13 miles of the North Metro Rail Line is scheduled to open in 2018.

RTD in late 2013 awarded a $343 million contract to Graham, Balfour Beatty, Hamon Constructors for construction of the electrified line. Dubbed the North Metro line, it will run from 124th Avenue south to Denver Union Station. The contract team is charged with completing work on the electrified line’s first phase by January 2018.

Two other regional rail lines are expected to begin service next year in addition to the East Rail Line serving Denver International Airport: the Northwest Rail to Westminster Station; and the Gold Line to Arvada and Wheat Ridge, Colo. All meet at Union Station.

Denver Transit Partners (DTP) is the private-sector concessionaire that will operate the regional service under a 34-year contract with RTD.

Hopes for extending the Northwest Rail Line as far as Boulder, Colo., for now have been tabled, leading rail critics to question the entire FasTracks program.

RTD’s commitment to public-private partnerships is extensive, and while such an option has been employed by other U.S. transit properties since at least the 1990s, RTD’s big buy-in may prove to be the model for other similar-sized agencies. RTD has suggested, in fact, that such partnerships may be the only feasible way to advance big-budget items, particularly as federal funding support becomes more problematic in the future.

Notwithstanding such ambiguity, two of RTD’s FasTracks projects, totaling $257 million, are included in President Obama’s proposed fiscal year 2016 budget, with some industry observers suggesting prospects for surviving congressional scrutiny remain fairly positive, control of both houses by the Republican Party notwithstanding. The proposed federal funds include $92 million to aid extending the Southeast Rail Extension LRT some 2.3 miles along Interstate 25. Four private consortia are competing to complete this $207 million extension, expected to be open in 2019.

Another payment of $165 million would assist funding the East Rail Line to Denver International, and the Gold Line between Arvada and Wheat Ridge, Colo., as well as a third rail route between Denver Union Station and Westminster, part of the Northwest Rail Line.

Meanwhile, Denver Transit Partners has earned considerable trust, and not just from RTD. On Feb. 6, 2015, the Occupational Safety and Health Administration (OSHA) recognized Denver Transit Partners’ work for Eagle P3, qualifying it for the Star Voluntary Protection Program (SVPP). Less than 1% of all workplaces governed by OSHA are accepted into SVPP.

Put all together, RTD hopes that by 2020 it can adequately service a metropolitan area of 2.8 million people, comprised of 40 municipalities in six counties along with two city/county jurisdictions, with 122 miles of rail right-of-way supplemented by bus services.

RTD claims FasTracks has generated more than $5 billion into the Denver-area economy and has created 13,000 full-time jobs. But perhaps more important in the longer term, the agency has offered a template for other U.S. cities to ponder if they hope to implement a 21st century transportation approach deviating from “more of the same.”