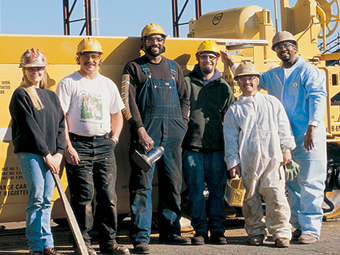 Railcar demand appears to be holding up at the modest levels seen in second-quarter 2019, “despite continued rail traffic declines and ongoing PSR implementation,” according to a Cowen and Company’s third-quarter shipper survey. “Barring a recession, orders are unlikely to fall below replacement demand of about 10,000-12,000 units/quarter for the balance of the year.”

“Roughly 53% of all shippers surveyed said they will or may order railcars in the next 12 months. This compares to 49% in our 2Q19 survey. About 48% now say they do not plan to order railcars, compared to 50% in our prior quarter survey. Within the 53% of total shippers who are contemplating orders in the next 12 months, 61% said ‘yes,’ they plan to place orders (67% in 2Q19), while 39% said ‘maybe’ (33% in 2Q19). This points to a decreased level of certainty about ordering within the same shipper group relative to last quarter.

“Industry wide PSR implementation has not been tested in a volume growth environment. The manufacturers’ answer to PSR may lie in new equipment designs. Locomotive new build outlook continues to be weak, but modernization should remain solid, driven by PSR and increased technological complexity. Railcar orders and Inquiries are soft but do not appear to have weakened significantly from 2Q levels.

“A key question we posed to the panelists—one that we have contemplated quite a bit lately—is whether industry wide PSR implementation can yield similar results to what we are currently seeing once rail volume resumes growth. We raised this question because of having observed that UNP, NSC, and KSU jumped on the PSR bandwagon around the same time that rail traffic happened to take a negative turn. As such, we believe the railroading technique has not been tested in an environment where it is being implemented by just about all railroads while at the same time rail volume is growing.

“Another PSR-related thought we have been mulling was whether boosting R&D spending on new equipment designs could be an important part of the manufacturers’ response to higher rolling stock utilization by the rails. New designs that could improve the efficiency, productivity and reliability of the rail operating network would be difficult to ignore by the carriers. And since they have been transferring the ownership burden more to lessors and shippers, an expedited replacement cycle driven by better designs would not require big increases in capital investment by the railroads, although they would likely provide rate incentives to equipment owners for upgrading their fleets.

“Railcar orders and inquiries may have softened a bit from already modest 2Q levels but have not fallen off a cliff. The panel noted stability/modest improvement in lease rates in some railcar types, such as coal and covered hoppers, but in others, such as DOT117 tank cars, which enjoyed a material surge over the last year, rates have dropped significantly to around $850/month, roughly half their most recent peak. Secondary market valuations for railcars remain solid overall but have shown some softening in some car types. Prices of newly built cars, however, do not appear to have dropped despite demand softness, as prices of materials have risen, and as some investors are prioritizing new cars over existing ones.

“The locomotive new-build market in North America, according to our panel, is likely to be weak for the foreseeable future as rail traffic is down and PSR implementation remains underway. Locomotive modernizations, however, should remain fairly robust, with most railroads having plans to perform them on some units. When it comes to modernizations, Wabtec generates roughly half the revenue of a new build but at much higher margins. Wabtec’s service revenue on existing locomotives should have upside beyond modernizations as the railroads increase utilization and as locomotives get more technologically complex.”

Review of GATX and GBX Presentations

“GATX noted its $4.85-$5.15 EPS guide for this year (unchanged, which is a slight positive given market weakness). The company earned $5.22/share in 2018. Spot railcar lease rates have likely softened somewhat over the last two months, even though management did not explicitly say that. We asked them about spot lease rates, which were still holding up well as of GATX’s 2Q19 earnings call in mid-July. The company refrained from commenting on how rates have trended since the 2Q call but said that, when rail traffic is down and railcar utilization is down, generally spot lease rates are affected. So, we think the implication is that spot lease rates have softened since July. This is largely consistent with the takeaways from our panel discussion.

“GATX described its capital allocation as follows: Priority 1: Invest in core assets. Priority 2: Optimize balance sheet. Maintain BBB/Baa2. Maintain capacity for opportunistic investments. Priority 3: Return capital to shareholders. GATX discussed current market dynamics: stronger in tank, weaker in freight. Backlog in tank cars is a little longer, which allows the company to push the lease rate a little more. Still about 15% of the fleet (17.8K cars) comes up for renewal this year. GATX can be a relatively defensive play in case of a short recession, protected by average lease terms and very low turnover in its shareholder base. GATX was most successful buying cars in 2007, 2008, 2009, so they are not too worried about a potential recession.

“GBX noted that order and inquiry activity has not fallen off a cliff but has moderated somewhat from the company’s fiscal third quarter, which saw total orders of 6,500 units. GBX appears to have achieved some progress in overcoming the transitory challenges it faced in Europe and Brazil last quarter. In Europe, market dynamics continue to be favorable for railcar manufacturers, something that GATX even alluded to in its own presentation. In light of the sell-off in GBX shares this year, the company indicated that it would be open to boosting its share repurchases as one way of capital allocation. Longer term, GBX could also consider a accelerating its lease fleet growth and having a more conventional leasing operation.

“Shippers are anticipating an average price increase of 3.0% over the next 6-12 months for the second consecutive quarter, below the survey’s average, but a positive sign that the rails are maintaining price in an environment where economic confidence and business growth expectations slipped. Results are mixed for the rails, though we would continue to be buyers of NSC and KSU on any weakness.

“Railroad shippers anticipate an average base rate increase of 3.0% over the next 6-12 months, equal to our previous survey and above rail cost inflation but below our survey’s 10-year average of 3.7%. However, the fact that pricing expectations stayed flat amid continued macro uncertainty and price deflation in the trucking market is a positive sign for investors worried that the rails would drop price to gain near-term volume.

“Only 35% of shippers are more confident in the direction of the economy today than they were three months ago, down from 41% last survey and well below the survey’s 48% long-term average. Second, shippers expect their businesses to expand at an average rate of 2.1% over the next 12 months, down 30 bps sequentially and below the survey’s 4.3% long-term average and 2016-present average of 2.8%. Similarly, the percentage of shippers planning to increase their headcount decreased by 400 bps from 2Q. Lastly, 31% of our survey expects there to be a recession in the next 6 months.

“That being said, our survey had a number of more positive macro read-throughs. Business levels over the past few months were positive for 53% of respondents, up from only 50% in 2Q. In addition, nearly 2/3rds of participants believe that a trade deal with China would be a benefit to their business, with 5% of the survey believing that a deal would be a 15% or greater benefit to their business.

“The average ‘positive’ (excellent or good rating) rating of Class I rail service (ex. KSU) decreased sequentially to 56% from 62% in 2Q. All of the Class I’s received worse ratings relative to 2Q, with top pick NSC’s rating decreasing the least. BNSF received the highest ‘positive’ rating, with CNI and CSX following closely behind. CP received the lowest ‘positive’ rating. KCSM received a better rating than its Mexican peer, Ferromex.”