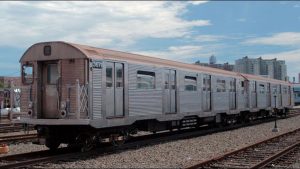 The year was 1964. Lyndon Johnson was campaigning for re-election as President, hoping his “Great Society” and “War on Poverty” programs would help the country, although the nation’s involvement in the Vietnam War was escalating and would later trigger his downfall. “Beatlemania” swept the country, as the “Fab Four” from Liverpool dominated the charts, with only the emerging Motown Sound from Detroit giving them any competition. The nation’s passenger train network was still gigantic compared to what we have on Amtrak today, but it was shrinking fast. Rail transit in the cities that still had it was shrinking, too. In New York, though, the second World’s Fair in 25 years was taking place in Flushing, Queens, and the “Brightliner” subway cars made their first appearance.