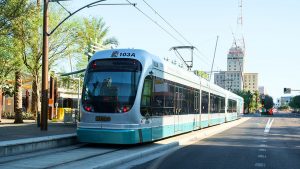 Phoenix: Thumbs Up for LRT, Thumbs Down for Koch