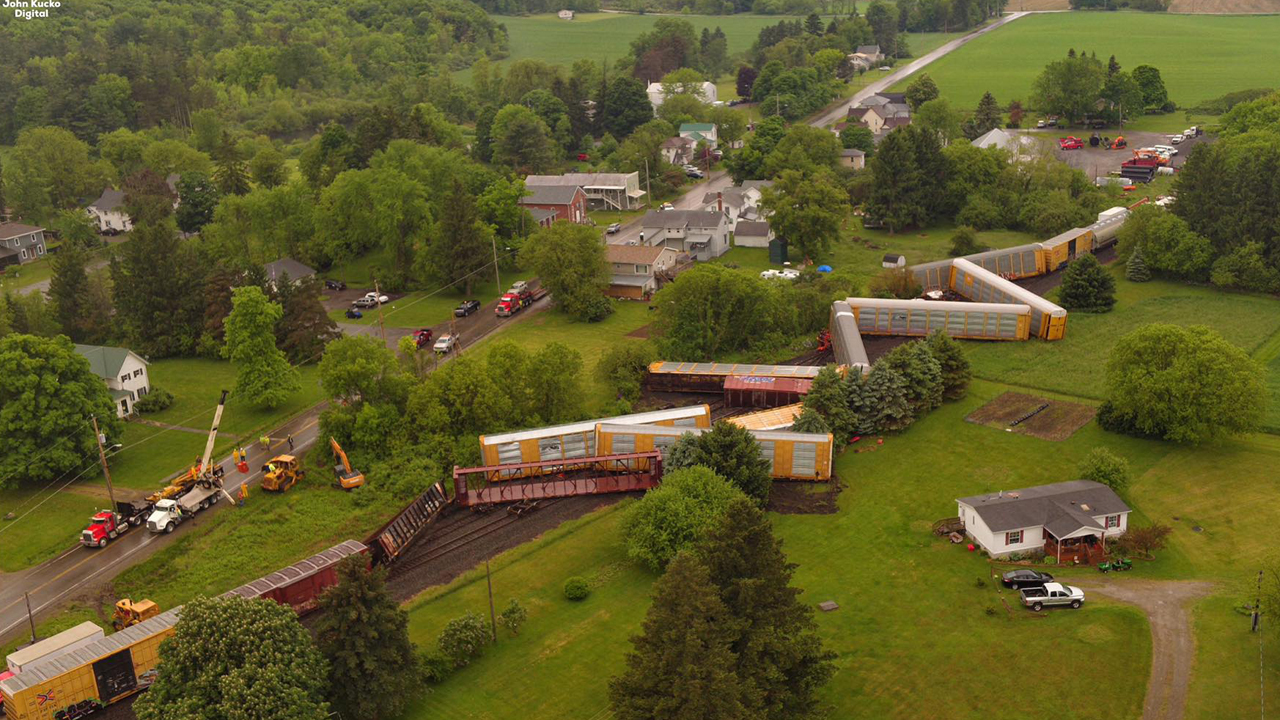 Railroad investigators on the scene in Hunt, N.Y. (Livingston County), site of an early morning derailment on the Southern Tier (Norfolk Southern). Ten to 15 railcars about one-fifth of the way into the train from the head end derailed. There were no crew injuries. This was eastbound NS 310, a mixed train that goes from Buffalo to Binghamton each day, originating in Elkhart, Ind. The derailed train was 22,850 trailing tons—212 cars, 13,500 feet (2.6 miles) long.

Having worked in the industry for 50 years, if you consider my postretirement involvement, I will be the first to admit that today’s railroads are, in many respects, much safer than they were when I was first employed as a locomotive fireman in 1970. Credit for that goes to railroad management, employees and the Federal Railroad Administration (FRA). However, in my opinion, greater progress has been impeded for economic reasons or organization priorities—more simply put, the pursuit of self interests. Having said that, it’s time to move to the point of this article.

Precision Schedule Railroading (PSR) has introduced a new dimension and meaning to the old adage, “Uphill Slow, Downhill Fast, Profits First, Safety Last ,” too wit. Gravity carries great sway over train speeds on river (level) grade, ascending and descending railroad trackage. Everyone who manages train operations or operates trains knows that, and the following: Short trains are easier to operate that long trains, no matter what the grade. If you are operating a train over long descending grades, or long ascending grades, followed by long level grades, there are relatively few in-train forces, slack action, run-in, run-out. But, if you are operating a train over undulating trackage, commonly referred to as hog-backs, where I come from, you have a whole new ballgame, one that increases the probability of an accordion-like derailment.

I know, I know, I can hear you now. How can he, the author, Bill Keppen, come to that conclusion? Well, allow me to explain. Let’s start with topography. There are hills on the NS Southern Tier. These are not mountains. They are hills, which would indicate undulating trackage. None of the locomotives on the 212-car-long, 13,500-foot (2.6-mile)-long, 22,850-trailing-ton consist derailed. Locomotives are, as we all know, much heavier that a railcar, particularly an empty railcar. The derailed cars appear to be empties, which don’t fair well when subject to run-in from heavy freight cars further back in a train. All of this can be deduced by looking at the top photo.

I can hear some of you now. There are many other factors that could or may have caused this derailment. That is true, but, if it was caused by a broken rail, unstable roadbed, a broken wheel or some other equipment failure, the derailment configuration would have looked much different. I know that, and I think most of you know that, as well.

So, now I hear you say, what’s your point? It’s these:

• Just because one basic PSR principle involves operating longer, heavier trains, you should not forget that one of the most basic principles of physics is gravity: Uphill slow, downhill fast. And, when your trains are operating over undulating trackage, gravity creates in-train forces, slack actions—buff and draft—simultaneously. It’s not really a very good idea to put empties on the head-end and loads on the rear end, particularly on undulating-grade railroad.

• Lower labor costs. Many of your locomotive engineers are very accustomed, and good at, operating normal-length trains over their assigned territories, regardless of grade or grade changes. You know what I mean. Normal is the type of trains they ran before PSR. If you expect them to get your monster trains over the road safely and efficiently, you might want to invest a little more time in education and training, even if that adds a smidgen to your operating costs.

When these kinds of things happen, everyone loses. Fortunately, in the derailment pictured here, no employees were injured and public safety, while at risk, was not compromised.

Next time? Let’s do what we can, and should, to prevent “next times.” The laws of physics cannot be changed—even by shareholders.