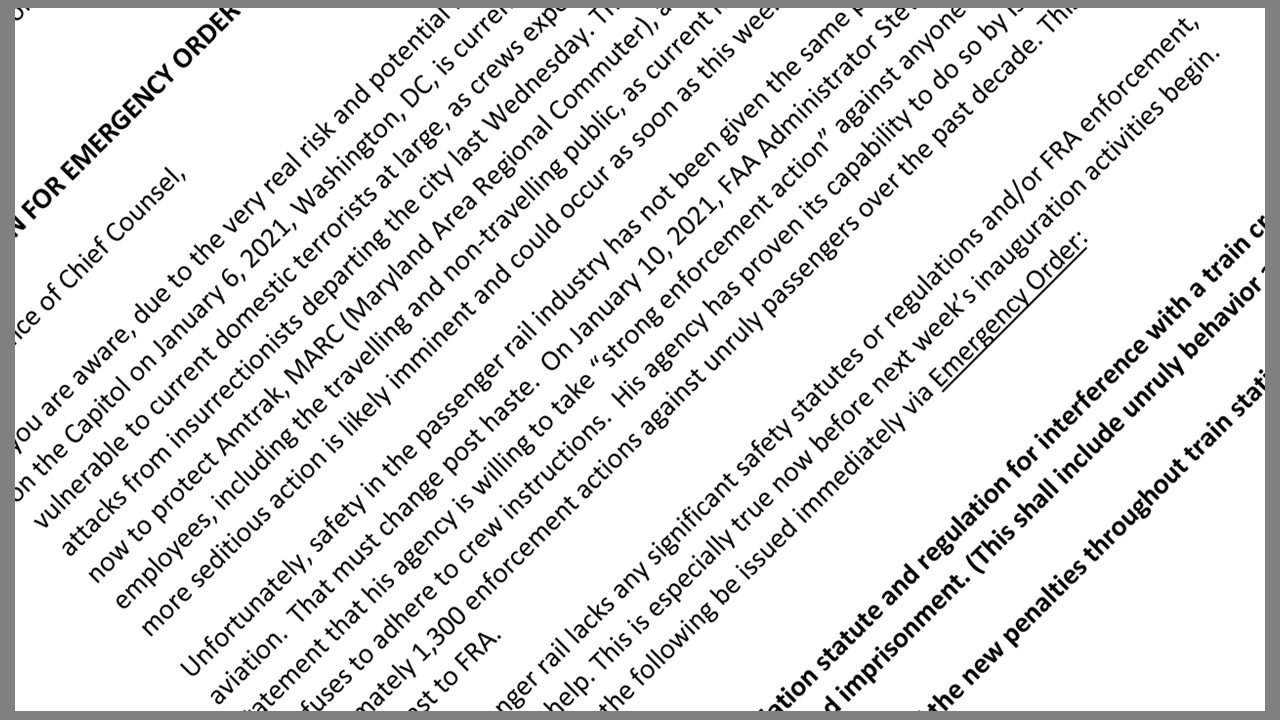 “[D]ue to the very real risk and potential for additional violence and riots after the attack on the Capitol on Jan. 6, 2021, Washington D.C. is currently on high alert,” SMART-TD President Jeremy R. Ferguson and BLET National President Dennis R. Pierce wrote to FRA’s Office of Chief Counsel. “Passenger rail has proven vulnerable to current domestic terrorists at large, as crews experienced escalated interactions and attacks from insurrectionists departing the city last Wednesday. Therefore, it is imperative that FRA act now to protect Amtrak, MARC (Maryland Area Regional Commuter), and Virginia Railway Express employees, including the traveling and non-traveling public, as current media reports suggest that more seditious action is likely imminent and could occur as soon as this week. Unfortunately, safety in the passenger rail industry has not been given the same priority as that in aviation. That must change post haste.”

In a Jan. 13 letter, SMART-TD and BLET urge DHS to implement a “No-Ride List” that mirrors FAA’s “No Fly List” by expanding 49 U.S.C. §114(h) to include FRA and passenger rail carriers.

Wrote Presidents Jeremy R. Ferguson of SMART-TD and Dennis R. Pierce of the BLET in their emergency order request: “Even as of this hour, the only real requirement for a person to board a train is simply to have a ticket; nothing more, nothing less. There is no screening process. There is no TSA. And there are no significant statutes or regulations to penalize those willing to interfere with a train’s crew or to do harm on a train, especially not when compared to the airline industry.”

“By granting an extension of the statute and giving access to the FRA and rail carriers, there will be, at minimum, a line of protection against those known to pose a threat from utilizing rail to manipulate the country’s transportation system, and it will mitigate against unwanted, aggressive interaction or attacks on train crews,” the presidents wrote.

“There is nothing more important than the safety of our employees. Since the start of the pandemic, our dedicated frontline employees have kept our trains running, providing a vital transportation service to essential workers. We join our labor partners in continuing to call upon Congress and the Administration to make assaults against rail workers a Federal crime, as it is for aviation workers, and to expand the TSA’s ‘No Fly List’ to rail passenger service.

“After last week’s violent attack on the U.S. Capitol, we are taking extra steps to continue ensuring the safety of our employees and customers in Washington DC and across our network as we prepare for the Inauguration. In addition to limiting ticket sales and requiring masks to be worn at all times, we are increasing our police enforcement to ensure strong compliance, remove noncomplying customers and ban those that don’t follow our policies. This includes deploying additional Amtrak Police officers onboard our trains and in our stations to support our frontline staff, and utilizing additional support from TSA and partner law enforcement agencies.

“The Amtrak Police Department is a member of the steering committee for the upcoming Inaugural Ceremonies and has prepared a robust strategy to secure our stations, trains and infrastructure. We also continue to work closely with and utilize the resources of our federal, state and local partners.”