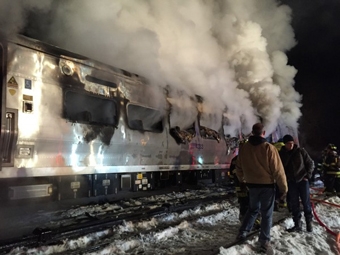 Six people are dead following a horrific grade crossing collision involving a packed Metro-North train and a Mercedes Benz SUV just north of the Valhalla, N.Y., train station on the Harlem Line, on the evening of Feb. 3, 2015. There were also numerous injuries, 10 of them serious.

Metropolitan Transportation Authority spokesman Aaron Donovan said the dead included the driver of the car—a woman (later identified as Ellen Brody of Elmhurst, N.Y.) who was outside the vehicle just prior to when collision occurred—and five people on board the train. The first car of the train (an M-7 electric multiple-unit consist) and the SUV caught fire. Witnesses reported seeing an explosion, followed by the fire.

The Harlem Line is 750 VDC third-rail-electrified. Preliminary reports say the force of the collision caused the third rail to dislodge and spear the SUV, entering the vehicle’s gas tank. Gasoline then ignited, causing the explosion and fire. The third rail lost power, as it is designed to do, but it broke off in several sections that penetrated the floor and interior of the M-7 and, like flaming arrows, piled up inside the railcar, stopping against the rear bulkhead, igniting an inferno. Extra-board engineer Steven Smalls, a three-year Metro-North employee and U.S. Air Force veteran, is credited with risking his own life to get passengers out of the railcar.

The collision occurred at the Commerce Street grade crossing in Valhalla. “The gates came down on top of the vehicle, which was stopped on the tracks,” Metro-North’s Donovan said in a statement, later confirmed by the National Transportation Safety Board. “The driver got out to look at the rear of the car, then she got back in and drove forward and was stuck.” He said the force from the impact pushed the SUV about 10 railcar lengths (about 850 feet) north of the crossing. The train involved was Metro-North 659, which departed Grand Central Terminal at 5:44 p.m. The collision occurred at approximately 6:30 p.m. Moto vehicle traffic at the crossing was heavier than usual at that time because traffic had been detoured off the nearby Taconic State Parkway because of an unrelated accident. NTSB also confirmed that the crossing warning system was in proper working order, and that the train was operating at 58 mph, below the posted track speed of 60 mph. Engineer Smalls sounded the horn and made an emergency brake application.

“The FRA and American Public Transportation Association (APTA) have worked hard to develop specifications to enhance the safety of rail passenger railcars, including collision posts,” rail safety specialist Paul Messina told Railway Age. “Strict flammability and toxicity standards are set by the National Fire Protection Agency (NFPA) for materials that are utilized for the seats, walls, floors, and other appurtenances within railcar interiors. Each car is also equipped with window exits that are clearly marked and enable passengers to quickly exit a train in the event of an accident. The side doors also have clearly marked emergency releases. The M-7 electric multiple-unit cars are relatively new, and have all of these safety features incorporated into their design. Unfortunately, it seems apparent that gasoline and vapors have caused this fire. Therefore, regardless of the safety standards that were incorporated into the design of these cars, a fire engulfed the lead car of the train.”

Messina has served as APTA’s Rolling Stock Equipment Technical Forum chairman and in that role participated in the development of the safety standards now employed on North American passenger railcars.

The accident was the second on Metro-North involving passenger fatalities in recent months. Four people were killed and 63 were injured, 11 critically, on Dec. 1, 2013, when a seven-car Hudson Line Metro-North train derailed on the curve at Spuyten Duyvil interlocking.