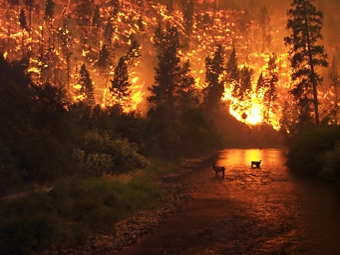 A series of wildfires in central and eastern Washington state, some blazing for nearly a week, have devastated entire communities and left several sections of railway damaged.

The largest fire, at more than 299,000 acres as of July 20, 2014, was ignited by lightning strikes six days earlier in the arid eastern foothills of the Cascade Range. An estimated 150 or more homes and other buildings have been lost, many of them in the town of Pateros, Wash.

That’s where Cascade & Columbia River Railroad (CSCD) took a direct hit. Larry Sorensen, general manager for CSCD, tells Railway Age, “At this time, damage has been sustained to a wooden bridge structure and a few hundred ties around Pateros. We are still evaluating the rail line, and will know more in regards to the customer impact as the week, and the wildfire, continues on.” A subsidiary of Genesee & Wyoming, CSCD operates a 134-mile line between Oroville, Wash., and a BNSF connection at Wenatchee. Its primary customers ship lumber, pulpwood, and limestone. On July 20, CSCD’s Sorensen said, “Our main concern at this time is the safety of our employees and their families, as well as the communities in which we operate. Also, our thoughts are with those of the firefighting teams that continue to fight this fire and those among our communities that have lost so much.”

Just days before the destruction at Pateros, BNSF had deployed a fire train consisting of tank cars and firefighting apparatus to Trinidad, Wash., to protect against a smaller fire that threatened its Spokane-Seattle main line. As of July 20, that fire train and another one like it were stationed closer toward the Cascades, where a 6,600-acre fire was burning near Leavenworth. BNSF spokesman Gus Melonas says, “We have two Fire Trains positioned, one at Leavenworth, one at Cashmere, both on standby. We haven’t had to use them other than to soak down ties on bridges. No train impacts at this point due to fires.”

Union Pacific was not so lucky. On the afternoon of July 19, a fire that broke out near Sprague, Wash., was driven northeastward by sustained 30-40 mph winds. Witnesses described persons firing weapons or setting off small explosives before fleeing the scene. BNSF’s nearby Spokane-Pasco route was spared, but the fast-moving fire, which charred nearly 6,000 acres by nightfall, swept directly across UP’s Spokane-Hinkle route just north of Croskey, Wash., and just minutes ahead of an approaching train. The crew of northbound manifest M-HKET-B (en route Hinkle, Oregon, to Eastport, Idaho) reported several instances of crossties burning along a roughly four-mile stretch of track. UP immediately closed the route to all other traffic. A total of five tanker planes were soon in the air tackling the wildfire with aerial drops of chemical retardant. By 6:00 p.m. on July 20, UP had traffic moving again south of Spokane, while track workers remained on site finishing repairs and assessing conditions after each passing train.

Neighboring Oregon has also been battling wildfires, but none have been as destructive to property as those in central Washington. At one point, BNSF had a fire train on standby near Madras, Ore., in case the 42,000-acre Shaniko Butte fire approached its track in the Deschutes River Canyon.