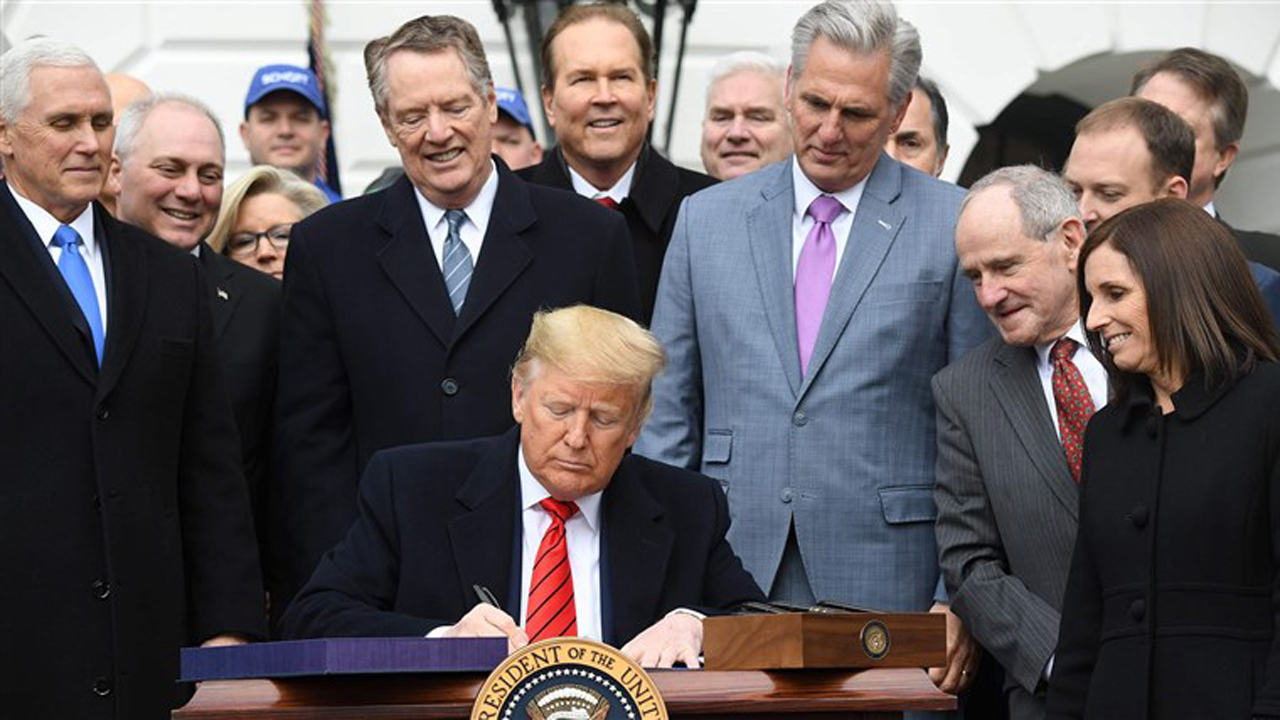 The U.S.-Mexico-Canada Agreement (USMCA), essentially a reboot of the North American Free Trade Agreement (NAFTA), which has governed trade among the United States and its North American neighbors since 1994, is now in place. President Donald Trump signed the agreement in a ceremony marked by “great fanfare,” as one news outlet described it, on the South Lawn of the White House on Jan. 29, with about 400 guests, including farmers, corporate executives and workers, members of the Republican party, but not surprisingly, no representatives from the Democratic congressional contingent that supported its ratification.

The President has promoted USMCA as a wholesale overhaul of the “NAFTA nightmare,” as he called it in his remarks at the signing ceremony (and “the worst free trade agreement ever,” during his 2016 Presidential campaign). Let’s be clear: NAFTA never was a nightmare; it definitely was the among the best of free trade agreements. The USMCA, not to take away from its vital importance to the North American economy and the railroad industry, isn’t all that different from what it replaced—thank goodness.

The USMCA is sort of like the “badge engineering” that General Motors practices: Taking a Chevrolet Equinox, making a few tweaks to the front clip and tail lamps, changing a few interior fittings, applying badges, dressing it up with different wheels, and calling it a GMC Terrain, Buick Envision or Cadillac XT4. It’s more luxurious, perhaps a bit more stylish (if you prefer a Cadillac or Buick or GMC to a Chevy) and has more bells and whistles. But underneath the skin, it’s still a GM Theta platform-based SUV, basically the same car, with similar powertrain options.

Trade experts and economists say the President’s characterization of the USMCA as totally new is inaccurate. “The USMCA is 95% of the existing NAFTA agreement,” said Peterson Institute for International Economics Senior Fellow Jacob Kirkegaard. “There are provisions that cover things like e-commerce and digital services, but with regard to the manufacturing sector, for instance, there’s very little change. [Trump] didn’t get much; he got to rename it.”

The President says the USMCA will boost U.S. economic growth by 1.2%. White House officials had previously estimated the economic boost at about 0.5%. Both numbers may be overstated. Moody’s Analytics Chief Economist Mark Zandi described the USMCA as a “tweak” to NAFTA. “It’s more marketing,” he said.

Trade economists say a few economic sectors will see an incremental boost. Higher automotive rules-of-origin requirements will increase the percentage of components and sub-assemblies that must be sourced in North America, and improved labor and environmental standards will decrease the financial incentives automakers have to manufacture cars and components in Mexico, where labor costs are lower and environmental regulations more lax.

The USMCA expanded intellectual property protections and provisions for digital trade, a sector that has burgeoned since NAFTA was originally instituted about 25 years ago. The USMCA also opens up the Canadian market to American dairy products, an element on which the President focused when touting how the deal will benefit farm states. Zandi said the agreement could provide a boost at the margins to the automotive and dairy industries, but would not generate the kinds of figures the White House has touted, like $68 billion in new economic activity and 176,000 jobs.

Economists say the White House-purported economic boost provided by the USMCA has more to do with keeping most of NAFTA in place, following the President’s initial threatening rhetoric about withdrawing from NAFTA entirely without a replacement in place. “I would think of this more in terms of what would have happened if this agreement didn’t go back into place,” noted Euler Hermes North America Chief Economist Dan North. “That would have been disastrous for the economy.”

“Thanks to the tireless efforts at both ends of Pennsylvania Avenue, renewed trade ties with our closest neighbors will benefit all three countries for years to come,” AAR President and CEO Ian Jefferies said. “As an industry built on connecting goods and businesses, railroads know that free and fair trade makes both our supply chains and individual economies stronger. Coupled with the Phase I trade deal with China, the USMCA will provide the certainty rail customers and American businesses need to grow and compete in world markets.”

No railroader knows this better than our 2020 Railroader of the Year, Kansas City Southern President and CEO Pat Ottensmeyer. He was an integral part of pushing for the USMCA, because as far as KCS and our industry are concerned, there was way too much to lose if things didn’t keep going South, across the border (or heading North as well). Ottensmeyer served as Chairman of the U.S.-Mexico Economic Council that strongly supported the USMCA.

“It really has been out of necessity,” he told me in a December 2019 interview for the January issue. “It’s so important to our company and to our customers and to the communities that we serve. We were one of a few U.S. publicly traded companies that didn’t participate in the celebration and the party that took place after the election in 2016. President Trump was elected, there was a Republican Congress, a Republican in the White House, stock markets were up, all the other railroads were up the day after the election. We lost literally 12% of our market capitalization in about the first hour of trading because we were so closely associated with Mexico and NAFTA. There was a lot of confusion. I came to work the next day, not intending to write a letter that started with ‘Dear Fellow Kansas City Southern Colleagues,’ but I did because I was told that there was a lot of concern about what this meant for our company. And in that letter, I said something like, ‘I’m going to try to get involved in the process and influence the outcome and protect our interests and those of our customers and employees.’ I’d been CEO for four months. I literally had no idea what that meant.

“We started calling people. And lo and behold, we were able to get meetings with the White House and members of the Cabinet as they came together, the leadership in the Congress, and the same thing in Mexico. We really were outspoken in Mexico as well, because we are really a Mexican company and a U.S. company that happened to be joined together at the top. We are not going to rip up our track and move it to Pennsylvania. We’re there for the long haul. We’re an important part of the economy. If you think about how important a critical infrastructure like railroads are to a nation’s economy, we play a different role than even a manufacturing company that is bigger than us in terms of the number of people they employ, because we’re not going anywhere. And all those other companies that are in Mexico—Mexican companies and foreign companies—rely on our network and our service to be efficient, get their products to market, get their raw materials, all of those things.”

Those of you acquainted with the 1970s and the disco music era probably recall The Village People and their hit YMCA. My warped sense of humor prompted me to write new lyrics to this tune, because “USMCA” is so close to “YMCA.” (Apologies to Weird Al Yankovic.) If you know the melody, try singing it:

It’s great to be in the USMCA!
USMCA!
It’s got everything, that you need to move freight
You can keep on, keep up, with raising your rates

It’s great to be in the USMCA!
USMCA!
You can lower OR, and just grow that top line
Those Wall Street folks, they’ll be feelin’ just fine

Railroads! You can’t do it yourself
I said, railroads! Put your pride on the shelf
I said, invest! Yes in your right-of-way
’Cause you’ll need all that good track

It’s great to be in the USMCA!
USMCA!
You can try PSR, and move those big trains
Those Wall Street folks, they’ll think you’ve got brains

It’s great to be in the USMCA!
USMCA!
It works in Canada, as well as Mexico
CN and CP, how they’ll love you so

That’s when Pat said, tariffs won’t work for us
He said relax! For in me you can trust
He said Congress! They won’t let us go bust
They don’t want to see us rust

It’s great to be in the USMCA!
USMCA!
We’ll move customer freight, with service that’s great
And no, they won’t mind, when we jack up their rates

It’s great to be in the USMCA!
USMCA!
At the end of the day, it’s the way to survive
And as Pat will tell you, that ain’t no jive