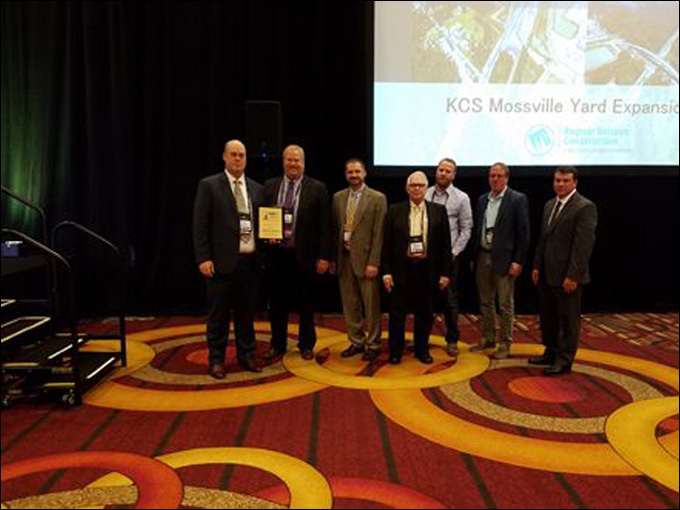 The National Railroad Construction & Maintenance Association (NRC) honored the recipients of its 2017 awards at the 2018 NRC Conference in Los Angeles.

Union Pacific’s (UP) Lakeside Sub Bridge Project in Box Elder County, Utah, by Ames Construction (Ames) was chosen as the NRC 2017 Small Project of the Year.

The KCS project had two major components. The first was a classification yard to expand the railroad’s operations. The second was a rehabilitated and expanded leased storage yard to enable the construction of the nearby Sasol Ethane Cracker Plant.

The existing KCS yard facilities were demolished and four new buildings were added, officials said. A wastewater treatment system, a fuel unloading track and a spill containment area were also implemented. Crews constructed a new 13-span bridge across the old yard to allow traffic to travel over the new yard without the need for multiple crossings.

The KCS project brought on many challenges, such as relocating a water canal, gas line, and a 115 KVA power line, and establishing drainage in swampy conditions. Ragnar Benson continually reworked the project schedule to maximize available work as unexpected challenges arose.

There were 405,000 man-hours worked put into the project, NRC said. The Ragnar Benson team had zero recordable injuries and no lost time accidents.

Named as the 2017 Small Project of the Year, the UP Lakeside Sub Bridge Project allowed for UP’s 24-mile causeway across the Great Salt Lake outside of Ogden, Utah.

NRC said it is a vital link in the transcontinental railroad, carrying dozens of trains daily.

Built in 1900, undergoing a partial reconstruction in the 1950s, the passage of time and its location in a harsh physical environment compromised the two concrete culverts that had allowed water to flow through the causeway.

By 2011, the causeway had sunk more than 15 feet, which NRC said rendered the culverts ineffective. Ames was the prime contractor for construction of a 180-foot six-span precast box girder bridge to reestablish the bi-directional water flow between the two arms of the lake.

An existing low-capacity bridge on the causeway complicated mobilization of heavy equipment to the bridge site. Equipment had to be delivered on highway-rated transport trucks and assembled at the construction site, which had extremely limited work areas alongside active tracks with high train traffic.

More than 40,000 man-hours were put into the project with one recordable injury. There was no lost time or restricted days.

“Ames managed through difficult obstacles throughout the project and managed to stay on schedule,” said Tim Smith, assistant manager of Bridge Construction for UP. “The Project Manager always had a solution to the obstacles. The quality of work was the best in the business.”

Hutton, named 2017 Field Employee of the Year, was previously employed by Canadian National Railway. He joined URS in 2012 as a Track Protection Rule 42 Foreman and was often responsible for protecting complex projects.

“Phil stood out from the beginning,” said D.G. Wilfong, director of Strategic Development in Eastern Canada for URS and Hutton’s director supervisor. “Phil demonstrates all aspects of [quality] through continuous improvement, acting with integrity, respecting relationships and ensuring accountability.”

“He treats his team with the highest regard,” said Priya Menezes, human resources manager for URS. “He is always looking out for his employees and is dedicated to taking the company’s success to a higher level.”

Hutton’s knowledge of the industry, commitment to customers, leadership abilities and his dedication to safety are among the many attributes that make for an outstanding Field Employee of the Year, NRC said.