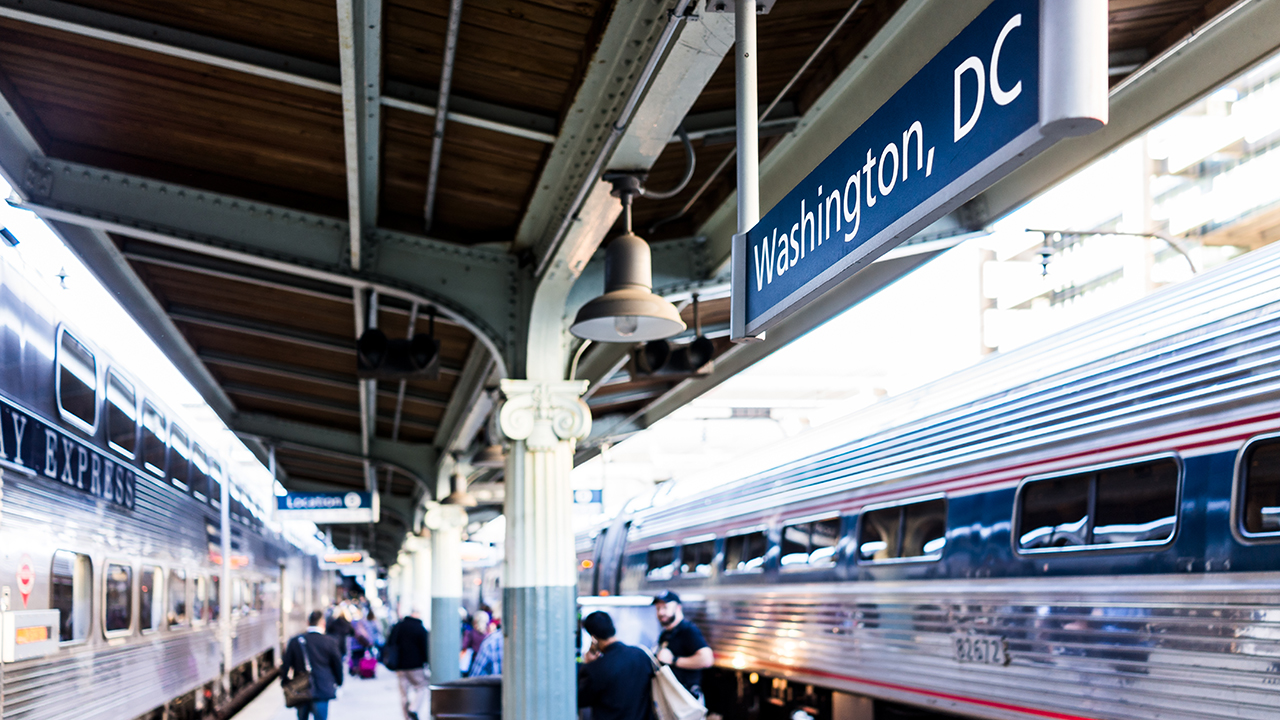 In 2021, the legislative battle over new infrastructure investment legislation occupied center stage. With this landmark measure enacted, implementation now falls largely to the U.S. Department of Transportation. Developments in other modes and other forces will unequivocally shape policies affecting the railroad industry. But the sharpest key light in 2022 will train on logistics oversight and rail economic regulation. How well railroads deliver for shippers—reflected graphically for the public in the speed of goods movement through ports across the country—will drive the pace of surface transportation and rail regulatory decisions in Washington.

UNPRECEDENTED FUNDING FOR RAIL WILL FLOW IN 2023

The $1.2 trillion Infrastructure Investment and Jobs Act (IIJA), signed into law Nov. 15, 2021, includes $550 billion in new “above the baseline” transportation spending. As widely reported, the measure allocates $66 billion primarily for Amtrak and passenger rail (though omitting dedicated new high-speed rail investments). The legislation boosts the CRISI/RAISE/INFRA constellation of competitive grant programs available for passenger and freight rail projects, along with port infrastructure grants for which freight rail can be eligible. CRISI—the Consolidated Rail Infrastructure and Safety Improvements program available for direct application by short lines—for example jumps from $362 million appropriated in FY 2021 to at least $1 billion annually for the next five years, and more if Congress chooses. The IIJA also establishes a new program to eliminate highway-rail grade crossings backed by guaranteed annual funding, creates a “Mega-projects” program including rail eligibility, and increases the federal commitment to a broad range of multimodal, climate change, safety, electrification, tech, and other initiatives benefitting rail.

Beyond the funding, the IIJA effectively bans operation in the U.S. of freight railcars manufactured by China. The final measure notably did not include the rail crew size provisions, prohibition on rail transport of liquified natural gas (LNG), or limits on blocked crossings sought by House Transportation and Infrastructure Committee Chairman Peter DeFazio (D-Ore.). The IIJA also omits substantive changes to current truck size and weight restrictions.

Following past enactment of surface transportation reauthorizations, policy momentum has typically shifted from Congress to Executive branch implementation. We should see the same pattern now, as Congress transitions to IIJA oversight both to take credit and criticize while the USDOT ramps up program rollout.

The big IIJA dollar increases will take time to spool up. Applications for competitive rail-eligible grant programs will likely open starting in Q1 or Q2 2022. That schedule pushes award decisions into late 2022 or beyond, with grant obligations thereafter. Therefore, 2022 will set the table for boosted transportation funding flows in 2023 and the out years.

With heightened scrutiny of supply chain performance across the economy, 2022 also will see a fully empowered Surface Transportation Board examining railroad service to shippers. On Dec. 16, 2021, Congress confirmed Karen Hedlund as the Board’s fifth member and cemented a Democratic 3-2 STB majority. Hedlund arrives at an agency agenda featuring review of the proposed CSX-Pan Am and CP-KCS mergers, and sharper assessment of freight railroad service nationally.

At 2021’s close, STB Chairman Martin J. Oberman sent letters to several Class I railroads regarding declining transportation service and increasing informal complaints from freight shippers. Those service levels will be influential in some of the highest profile regulatory proceedings that the STB is expected to consider in 2022.

For example, when a shipper alleged that its serving Class I railroad, which had previously provided service five days per week for a decade, unilaterally reduced service to three days per week, incorrectly placed cars on 30% of the scheduled service days, provided no service at all on 14% of scheduled service days, and that it incurred increased shipping costs and demurrage charges, the Board listened even though the subject commodity was exempt. In a decision in Sanimax vs. Union Pacific Railroad issued Nov. 2, 2021, the Board found that partial revocation of a commodity exemption was necessary in order to investigate whether alleged service reductions violated a railroad’s common carrier obligation to provide reasonable rates and services upon request.

John Scheib, formerly EVP and Chief Strategy Officer and earlier Chief Legal Officer at Norfolk Southern, now a partner with Kaleo Legal, notes how the Board carefully distinguished the procedural effect of the Nov. 2 Sanimax decision: “To be clear, the Board has not reached a decision on the merits of the issues raised in Sanimax’s complaint. However, partial revocation of the exemption allows this case to proceed to discovery and evidentiary development in 2022 so that the Board may evaluate the service issues raised by Sanimax in greater context.”

Scheib, whose prior public service includes his tenure as Chief of Staff to former STB Chairman Roger Nober and Counsel to the House T&I Subcommittee on Railroads, observes further that “the Board has rarely revoked a commodity exemption, and the case seems to signal an interest in what the rail common carrier obligation requires.”

The Board’s closely watched reopening of Reciprocal Switching Docket No. EP 711 (Sub-No. 1), marks how intense this scrutiny has become. In line with a July 2021 White House Executive Order aimed at promoting competition in the American economy, the Board has advanced EP 711 because, as Chairman Oberman told an industry conference this past November, “It has become clear to me that this issue is too important … to just have these seemingly endless back and forth discussions between the STB, railroads and their customers.”

Oberman continued: “Since joining the STB, I have focused much of my attention on fomenting as much competition into the delivery of rail services as possible. Because, in our American system, almost always, more competition in business means better products, better prices, and a more thriving economy. I believe that the potential is there for a more accessible reciprocal switching mechanism to provide that answer to competition. Any railroad that is really providing that kind of service at fair prices should welcome such an environment.”

In other areas, too, the Board has amplified its service and competition inquiries. At regular virtual meetings of the Railroad-Shipper Transportation Advisory Council (this author serves as a small-railroad representative on the RSTAC), the dialogue includes customer service performance. So the EP 711 docket may more fully be considered as one facet of an accelerating Board regulatory examination.

Yet railroads hold some reach over the pace of the Board’s review and further Congressional and Executive branch engagement. John Scheib explains: “As has historically been the case, service levels to rail customers will affect how actively regulators and other government actors are involved in the supply chain.”

Railroads do not operate in a vacuum, and inside and outside drivers can disrupt the industry quickly. Avery Grimes, Chair of the Transportation Research Board Technical Activities Council, which oversees the work of all TRB technical committees, stressed the renewed emphasis on logistics productivity solutions across all modes at TRB’s January 2022 annual meeting. Grimes (who also serves as a senior adviser to Patriot Rail CEO John E. Fenton) noted Transportation Secretary Pete Buttigieg’s attention to supply chain issues in his remarks to TRB attendees: “The Secretary highlighted both short- and long-term investments including research and technology, and specifically stressed the human element of supply chains.”

Grimes sees scrutiny of long-established paradigms in all modes escalating as the supply chain focus continues. New policy, workforce, technology and other policy decisions could alter the competitive balance. “Railroads have to follow these larger trends, and trends can pivot swiftly,” said Grimes. “Improving logistics performance means continually enhancing intermodal alignment, while recognizing distinct modal contributions.” As Secretary Buttigieg told TRB participants from every mode, “If you got a package today, thank a trucker.”

Looking ahead, a central policy segment, as always, is safety. Confirmed by the Senate on Jan. 12, 2022 as Federal Railroad Administrator, Amit Bose will chart FRA’s path across the agency’s jurisdiction, and especially on forward-facing regulatory issues including crew size oversight, and the scope of automation and technology deployment.

Workforce issues also deserve attention. This spring, the International Longshore and Warehouse Union, representing 22,000 dockworkers, and the Pacific Maritime Association, on behalf of shipping lines and terminal operators at West Coast ports, will begin negotiations on a new labor agreement. The prior round of bargaining in 2014-15 drove work slowdowns and employer retaliations slowing productivity and ultimately requiring federal mediation. Meanwhile the National Carriers’ Conference Committee, representing more than 30 railroads, continues the bargaining that began in 2020 with 12 rail unions through the Coordinated Bargaining Coalition for approximately 125,000 employees at a time when some rail CEOs have struggled to find workers in certain locations. Additionally, across the rail sector, the same COVID-19 workforce challenges facing the entire economy drive uncertainty and costs.

Because freight railroads operate as part of an integrated logistics system, workforce developments not only at railroads but in the trucking industry shape the competitive landscape. Severe driver shortages in trucking led Congress to mandate as part of the IIJA a pilot program enabling 18-year-olds to operate commercial motor vehicles. In a Federal Register announcement Jan. 14, the Biden Administration rolled out its version of the Safe Driver Apprenticeship Pilot Program, building on a 2020 Trump Administration test program.

In 2022, we’ll see the first IIJA funding flows cemented, and other transportation policy currents that may or may not affect the rail sector. Logistics and service will lead the agenda.

The day before speaking to TRB, Secretary Buttigieg inspected the Ports of Los Angeles and Long Beach. On Jan. 11 in Los Angeles with California Governor Gavin Newsom, other elected officials, and port leaders, Buttigieg commented, “When there is an issue affecting ports here, you will feel it as far away as my Indiana hometown.” That is because the LA ports together process more than 40% of the containers arriving to the U.S. Literally and figuratively, the velocity of that cargo movement will this year frame how policy decision-makers see and act on goods movement challenges.

While as of mid-January, 12 vessels waited in or near San Pedro Bay to unload with another 90 ships farther off the coast or approaching the ports, Port of Los Angeles Executive Director Gene Seroka spoke positively about recent progress in handling a record 2021 volume of 10.7 million container units, 13% higher than the previous Port of LA record set in 2018. Just in the first half of January, containers sitting on dock for nine days or more at both LA ports decreased by nearly a third, with other fluidity improvements under way through fuller logistics teaming and coordination. Seroka told Railway Age, “Moving forward, we need to do a better job utilizing our rail capacity. Our rail partners tell us that they can accommodate substantially more cargo on the rail side, so we’ll be working with them and others in the short and long term to make that happen.”

The success of this partnership, other initiatives to meet the nation’s supply chain concerns, and especially how customers perceive the rail service they receive, will guide many of the most sensitive Washington policy outcomes touching the railroad industry in 2022.