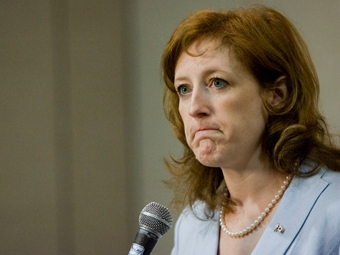 Trains carrying 20 cars or more of crude oil or ethanol must not exceed 50 mph under a new directive issued by Transport Canada on Wednesday, April 23, 2014, and that limit may be lowered for some locations after specific risk assessments for particular urban populations and sensitive assets such as water sources.

Unmodified older DOT-111 (pre-CPC-1232) tank cars will be banned from Canadian rails after May 1, 2017. The industry’s so-far voluntary CPC-1232 specification that has governed tank car fabrication since 2011 is being adopted as regulatory law, though that will be eventually superseded by whatever new standard emerges from an ongoing U.S. Pipeline and Hazardous Materials Safety Administration (PHMSA)/Federal Railroad Administration (FRA) rulemaking process.

Canadian Transport Minister Lisa Raitt also announced that the country’s established Emergency Response Assistance Plans (ERAP) will be extended to cover trains with just a single carload of crude oil, ethanol, gasoline, diesel, or aviation fuel. Such ERAPs imply the pre-positioning of emergency response assets and trained personnel along the entire route and require the level of cooperation with emergency responders that municipalities in both Canada and the U.S. are demanding.

The new regulations are a response to interim recommendations emerging from the investigation into the July 2013 calamity at Lac-Mégantic, Quebec. Forty-seven people died when a runaway train carrying crude oil exploded upon derailment in the town’s center. Canada’s Transportation Safety Board has yet to publish its final report on the event that disrupted the unfettered growth of crude-by-rail since 2011.

The new regulations were detailed in an Emergency Directive and a companion Ministerial Order. Raitt said Canada’s simpler regulatory process allows the country to act immediately with respect to tank car standards while waiting for the FRA and PHMSA to complete the consultations and deliberations required by U.S. regulatory practice.

Disparities between Canada’s regulatory system—essentially an extension of the government’s executive power—and the more consultative process required of the FRA and PHMSA, have disrupted the usual synchronicity of rail regulation across North America. Historical practice has been for Transport Canada to await FRA regulation and endorse it with matching rules. This time, Canada acted first, partly because Lac-Mégantic was a domestic disaster and because the country’s accident investigation legislation requires a government response within 90 days of any recommendation by the autonomous Transportation Safety Board.

Consequently, Canada chose as an interim measure to absorb into regulation the industry’s voluntary CPC-1232 specification for tank cars built since October 2011, and to impose by law the voluntary speed restrictions urged upon U.S. railroads by the FRA. Transport Canada said the route selection measures included in the U.S. voluntary action are impractical in Canada, where there are few alternatives to the linear main lines that almost invariably run through the centers of the country’s towns and cities.

Raitt said the tank car phase-out is faster than oil shippers wanted (though slower than Canada’s Class I railways would like). She said she was confident that railcar builders can achieve the objective of providing sufficient new and upgraded cars to meet demand. Regardless of the pace of fleet renewal in the U.S., Canada will bar any tank car not meeting the CPC-1232 standard from Canadian rails after the May 2017 deadline.

The most significant divergence from U.S. practice is the requirement for Emergency Response Assistance Plans covering trains carrying dangerous goods. ERAPs are a Canadian innovation implemented following the 1979 derailment and explosion of a train carrying chlorine and propane in a heavily populated corridor west of Toronto. The new regulations extend the requirement for ERAPs to crude oil and ethanol and to trains hauling just one car of such cargo instead of the multi-car consists previously targeted by ERAP regulations. Also, the vast majority of tank cars are owned by shippers or railcar leasing companies, and the new ERAP protective direction is primarily directed at shippers.

The government has delegated development of ERAPs to an industry task force that will have 150 days to produce plans for Canada’s crude oil and ethanol routes. The task force will include national firefighter organizations, municipalities, shippers, and industry associations, thus going some distance to appease the country’s anxious first responders and municipal councils.

The measures may inspire similarly concerned first responders and local governments in the U.S. who must often react to incidents without adequate information, equipment, or training. If Canada does set the model for emergency response planning, this particular disruption of the continent’s lockstep regulatory tradition may lead to a more socially sustainable regime for the transport of dangerous goods by rail.

“CN supports and will implement relevant railway measures called for by Transport Canada’s rail safety plan announced today. CN believes the plan will broadly help to advance rail and public safety with new requirements for all participants in the dangerous goods supply chain, including shippers, tank car owners, and railways. CN is studying the details of the government’s plan but sees that it is generally in line with CN’s views on improved tank car safety and the company’s new operating practices for dangerous goods trains.”

“We welcome Transport Canada’s announcement, but are disappointed with the [Canadian] federal government’s incomplete actions around addressing human behavior factors affecting rail safety in Canada. CP has been a vocal proponent of increased tank car safety standards and we applaud the Minister of Transport’s direction to eliminate the use of older DOT 111 tank cars. While we will comply with all the orders, and have started the process of implementing the various aspects within the timelines required, I must again reiterate that reducing train speeds does not address the causes of railway accidents, nor is it a solution to rail safety. Human behaviors are a significant factor and should be the focus if the goal is to truly improve safety. We believe that regulatory changes that would support the use of inward facing cameras in locomotives to allow for compliance monitoring and instituting a program to reduce grade crossings to decrease the incidence of crossing accidents would be key contributors in further advancing rail safety in Canada.”

“We are pleased that Transport Canada has recognized the safety benefits of the voluntary action items already implemented by railroads in the U.S.,” said AAR President and CEO Edward R. Hamberger. “Railroads also have been in the vanguard of those calling for the aggressive retrofit or phase-out of older tank cars currently in service moving flammable liquids, including crude and ethanol. Transport Canada has indeed recommended an aggressive timeline and we are confident that the industry will do all it can to meet it.”

“We have been working closely with Canada on improving the safe transport of crude oil by rail for some time and applaud their efforts today,” said Federal Railroad Administrator Joe Szabo. “Their announcement is consistent with much of the work we’ve already begun in the United States, including voluntary agreements on routing and speeds that we have already secured. As Canada begins its rulemaking process on tank cars, we will continue working closely with them based on our existing work, including the possibility of an even more advanced tank car than is currently in use. Our countries have different processes, but we have the same goal—the safe transport of goods and people on the rails. DOT is committed to ensuring the safe transport of crude oil by rail and has already taken action on multiple fronts, including issuing emergency orders, conducting special inspections, and reaching immediate agreements with rail companies on reducing speeds, increasing inspections, using new brake technology, and investing in first-responder training.”

“We share Transport Canada’s commitment to improving the safety of transporting flammable liquids by rail,” said RSI President Tom Simpson. “For the past three years, the railway tank car manufacturers and lessors have been working toward stronger standards for rail tank cars. In 2011, we began to voluntarily implement a new, stronger, standard for tank cars that was developed in conjunction with the Association of American Railroads. Already, we have committed to invest more than $7 billion to put 55,000 enhanced cars into service by 2015. Harmonization between Canadian and U.S. regulations is critical to maintaining a viable North American transportation system. We will review the full details of Transport Canada’s regulations as soon as they are released and will work closely with both the railroad industry and the government to improve tank car safety.”

“We are encouraged that Transport Canada has taken critical next steps to support the safe passage of dangerous goods. These are important standards for North America and we applaud the Government of Canada for its leadership in implementing them. In February 2014, Greenbrier announced its ‘Tank Car of the Future,’ a safer design for crude oil and ethanol service and the transport of other hazardous materials. This new design will address safety concerns from the existing legacy fleet of older DOT-111 cars and meet new industry and government standards for the transport of hazardous materials. Safety is paramount to our customers and within the rail industry. Our recent announcement that we are doubling Greenbrier’s tank car production capacity will help the rail industry as we move toward greater regulatory certainty on tank car standards and address the measures announced by Minister Raitt.”